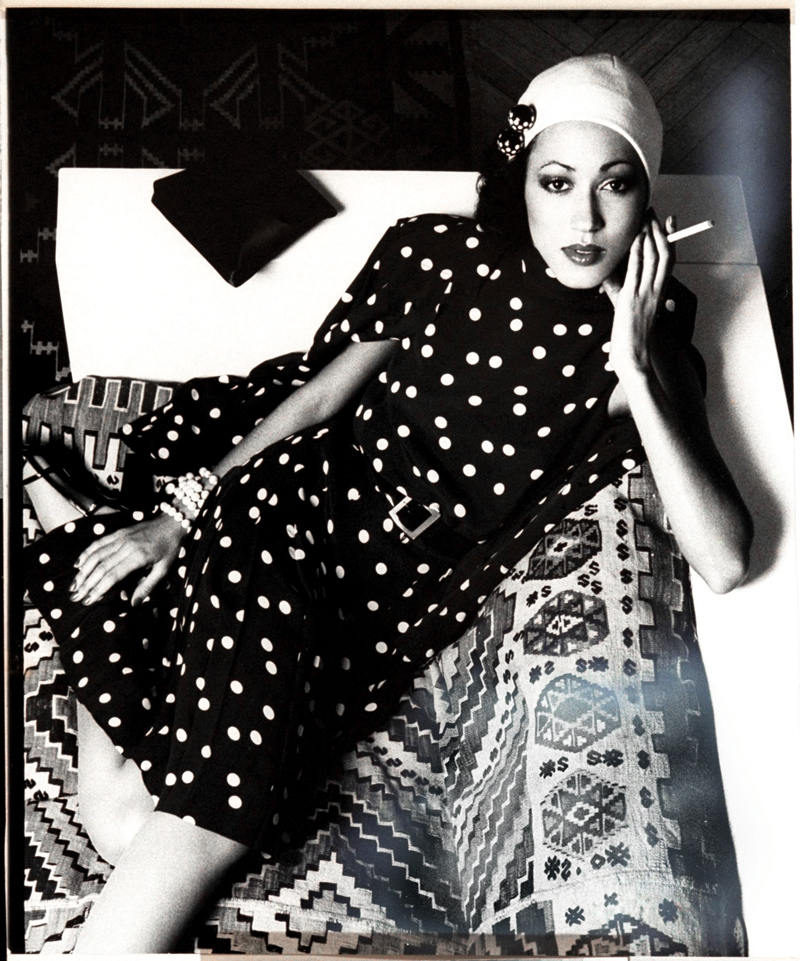 Model Pat Cleveland, reclining on a sofa and holding a cigarette, wearing a polka dot print sleeveless dress and matching shirt-jacket by Chuck Howard, with a white skull cap by Adolfo. (Photo by Bob Stone/Conde Nast via Getty Images)

Pat in repose (Shot byChuck Howard for Vogue in 1973)

With her signature walk, vibrant personality, and singular brand of chic, Pat Cleveland is one of the most famous models to ever hit the runways. Five decades after she first emerged on the scene, Cleveland is reliving her years as a muse to designers Halston, Stephen Burrows, Karl Lagerfeld, and fashion illustrator Antonio Lopez in her new memoir, Walking With the Muses. Cleveland, whose way of speaking is as magnetic as her looks, reveals what it was like opening up about her childhood, her love affairs, and her path to icon status.

Your first love, known only as Matthew, played an important role in your life and is covered extensively in the book. Where is he now?
Either dead or alive? I’m sure if people comb through the streets of New York, they’ll probably see him somewhere sitting and philosophizing and being who he is. You think you’re going to go in and change that person, but you’re not that person. God bless him. [Laughs]

Which chapters did you enjoy writing the most?
The chapters about my mother; she was not well during the time I was writing them. She passed away last year just as I was getting the book together, so she didn’t get to read it. Growing up, you don’t realize how special things are until you get out in the world. I could see my roots and the plan for my life, which made me feel really strong.

What do you think your mother would have thought of your book?
She may not have liked it all! She was a private person—very sophisticated and dignified. Since she was a painter of moments in American history, she probably would have appreciated the book, eventually. But she would always say, “No, do it a different way, and put more of me in it.” While I was writing my book she kept asking me when I was going to write her book.

I’m sure there’s a book there!
I’m starting that one next.

How did you remember your life in such detail?
I kept diaries since I was 16. I’ve always loved to listen to people, and I remember everything. If a train is coming at you full speed, you will never forget it—if you live through it.

How did you emerge as one of the first black supermodels?
There had to be new people representing the times. Once in a while, you put the hot pepper in the sauce…maybe I’m a touch of cayenne, who knows? When I first came around, it was all about change, and mixing up the culture—trying to find out where you belong. We all thought we were going to change the world, and be one, and be in love with each other. There was a rainbow feeling, like every color counts. In the ’60s, music changed everything—how war affected young men, how women wanted to be strong by wearing pants and no bra and skirts up to their tookus. [Laughs] Everyone wanted freedom. Fashion came into my life because it was something I thought I had a talent for. I wanted to be a designer, but I found I had another purpose: I could fly the flag and be the flagpole for those who were much more talented than I was.

Your famous walk certainly brought them to life. How did you develop such a distinct way of moving?
It’s all about not falling off the runway and being a bit of an athlete. When you have to move quickly, you develop balances, so it became a dance. It’s different in every decade, because the music you’re listening to moves your body and soul.

Cleveland with Stephen Burrows in his “lettuce dress”

leveland with Antonio Lopez at Vogue

Cleveland at Régine’s with Andy Warhol

Your daughter, Anna Cleveland, has a similar presence on the runway.
Oh, I’m glad you like her, because she loves what she’s doing.

How did you feel about her entering the modeling world?
It was a safe road for her, because I knew who was involved. She was encased in this protective egg of fashion where everybody knew her.

From your perspective, how has the industry changed the most?
Over 50 years, there have been a lot of changes because of women’s rights, the mix of black and white, and international travel. Also, big corporations have taken over fashion, and it’s all about numbers, hits, and likes. The art is so tiny now. When I started out, we didn’t have all these means of communications. It was just a room full of society ladies and royals, and it was a much more secretive thing. Everybody else had to wait to get the knockoffs!

You write about having many of your most prized outfits pinched by an ex.
He took off with just about everything I wasn’t traveling with. I still had some Stephen Burrows, but now, those pieces belong to a museum. Oh, believe me, I had so many wonderful things. It’s heartbreaking! Scary, too.

Which piece have you cherished the most?
A Stephen Burrows cloud dress in a simple matte jersey with a sky cloud pattern and a long train. I used to wear it in London with a red ostrich-feathered fan. I would wear platform shoes in gold, so I looked as though I was a cloud coming into the room—but I was always working my red feathered fan, of course. So maybe I was a big red bird flying in the sky!

Do you still keep in touch with Stephen Burrows?
Absolutely! He comes to visit me, and I visit him. He’s always the same happy, simple, and easygoing person. He’s so kind. Of course, I keep in touch with other friends too, like Steven Meisel. He was in school with me, and he’s a good friend. I still hang out with Corey Tippen and Antonio Lopez’s friends. It’s like a little club. We know that we had an experience that is not repeatable.

One of those experiences was the Battle of Versailles. What has it been like for you to see all the recent coverage on that event?
It’s important that someone took notice that there was a change in culture and that people can come together and experience the same kind of things, whether you’re royal or you’re from 90th Street. In that moment, seeing all the girls enjoying themselves in Paris, arm-in-arm and holding hands, walking down the Hall of Mirrors with Givenchy and just having a really good time was so wonderful. We weren’t thinking about business or social status. We were in heaven!

You were very close to Halston, who had a reputation for being difficult.
It’s totally unfair. If he were an animal, he would be a swan. He had a nice long neck. He always used to say to me, “My neck is too long!” That’s why he wore turtlenecks all the time. He was always protecting me like a big brother. I was so in love with him. Oh, my God, he was so beautiful! And he was so generous.

You had to deal with many difficult personalities throughout your career. How did you learn to navigate them?
You’ve got to be like a seed in the wind. If you can’t land on a rock, go somewhere where the soil is ready and open for you. You can’t always be mad about things. Don’t try to knock down the same door, because there are other doors to open. You’ve got to find your way. If one person says no, then you say, “Well, okay. Next!” 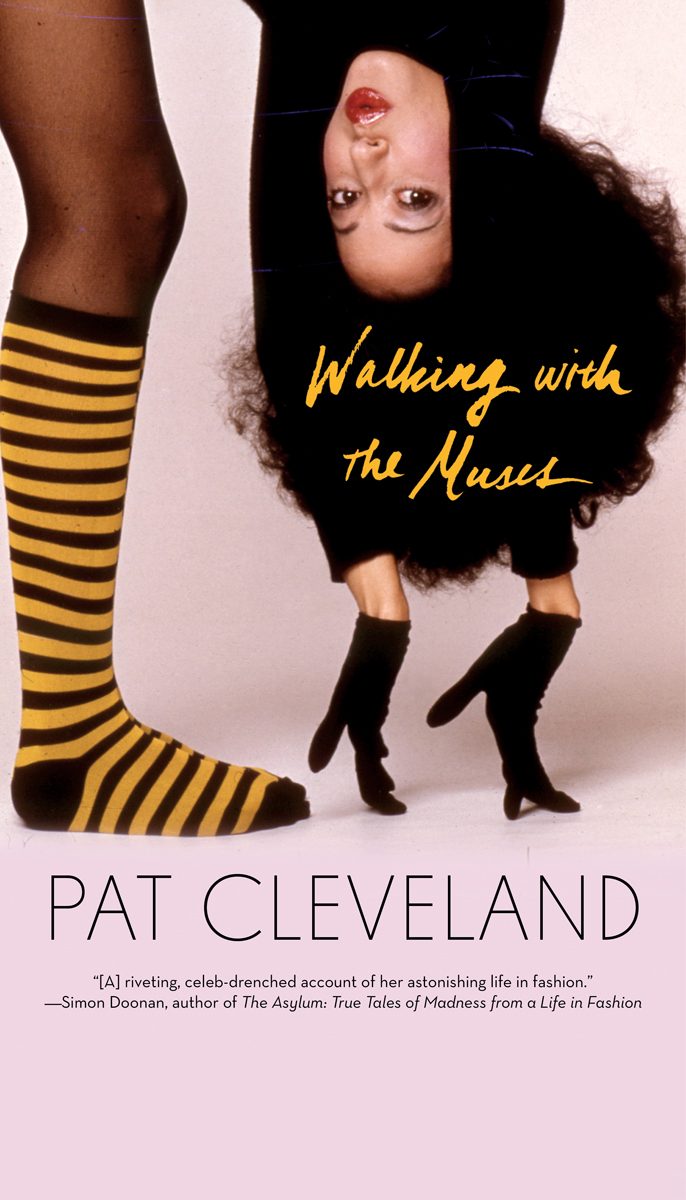 Milan was a door that did not open for you, but luckily, Paris did.
I got a bit thrown off, but I went where my friends were, and I was safer in Paris. Girls, be safe! You know when you’re young, and you look in a magazine, and you see a beautiful girl standing in Greece on top of pillars and doing wonderful things and you say, “Why can’t my life be like that?” It was the most real thing. It was like I woke up, and I wasn’t dreaming. It was actually happening to me.

You met Karl Lagerfeld during that time. How has your relationship evolved over the years?
Oh, he is on his path; he always has been. He’s so creative and open to new things. I’m so thankful to him for opening the doors of his home to me, allowing me to be part of his life, and showing me his lifestyle. He sticks with it, and he’s a hard worker. That’s why he is still so relevant, because he’s out there working it all the time. His work is his best lover. So that’s how it is—you marry your career and you have a lot of friends.

One of our favorite stories from the memoirs was when Jerry Hall fell on top of Valentino at your house party.
At the time, I was living in Châtelet in Paris, which was not a nice area then. I was so surprised everybody showed up, but they just wanted to have a good time! It was a delicate little duplex on rue Saint-Martin, and everyone was working those stairs and posing. A bunch of drag queens showed up and hung off the banister. Eventually, the stairs just couldn’t take it anymore, and that’s when Jerry fell.

If only a camera could have captured that moment.
We didn’t do cameras at private parties. Everything was really private! You went to a party and you didn’t take one picture. You were lucky if you even heard about the party because you had to find out through the grapevine.

What have you learned from writing your memoirs?
The process of writing is about so much more than just myself. Those who read it really become a part of me. Maybe they’ve shared the same experiences, or maybe they will learn to be careful!

What was the most difficult subject to tackle?
My lovers. It changes your life to share it with someone for a long period of time, and writing those chapters was both tender and hurtful. It was difficult to see that even with all that love, some relationships have to end. I want to be forgiving and honest about my vulnerability. Girls these days don’t want to give into anything—we’re so career-oriented, but we still have that tender side that hurts.

After five decades in the industry, you look as fabulous as ever. What’s your secret?
You have to put your feet in the grass and wiggle your toes, touch your nose, bend forward, stand up, look at the sun, eat some vegetables, swim a little bit, make sure you get some sleep, and fall in love!