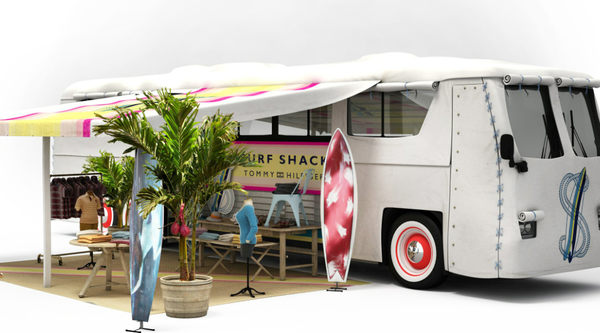 Up for a little après-surf attire? Then hop onto the Tommy Hilfiger surf shack tour! This month the brand is launching a limited edition “Surf Shack” collection inspired by the warm waters of Malibu to Australia’s Gold Cost and the chilly Atlantic in Biarritz. The collection will feature 12 women’s pieces and 16 men’s pieces with looks like a pastel yellow maxi dress, multi-colored striped bikini, or a gingham blazer for women to fuchsia and blue swimshorts, a pair of white roll up pants with a surfboard print and a chambray zip anorak for men. The collection will be making its rounds via Tommy Hilfiger’s surf shack bus, which will ultimately double as a pop-up shop. First stop? The bus rolls into L.A. first on June 20th at the Tommy Hilfiger flagship and then on to The Brig on Abbot Kinney on June 22nd and 23rd followed by North Avenue Beach in Chicago on June 29th and 30th, ultimately landing in Toronto on July 13th and 14th at Queen Street West. What else will be up for sale? Surfboards done in collaboration with the Art Production Fund be up for grabs and will feature the designs of artists like Richard Phillips, Lola Schnabel, Scott Campbell, Gary Simmons, and Raymond Pettibon. The boards and clothing are also now available in for a limited time at select Tommy Hilfiger stores worldwide in case you can’t catch the bus wave.