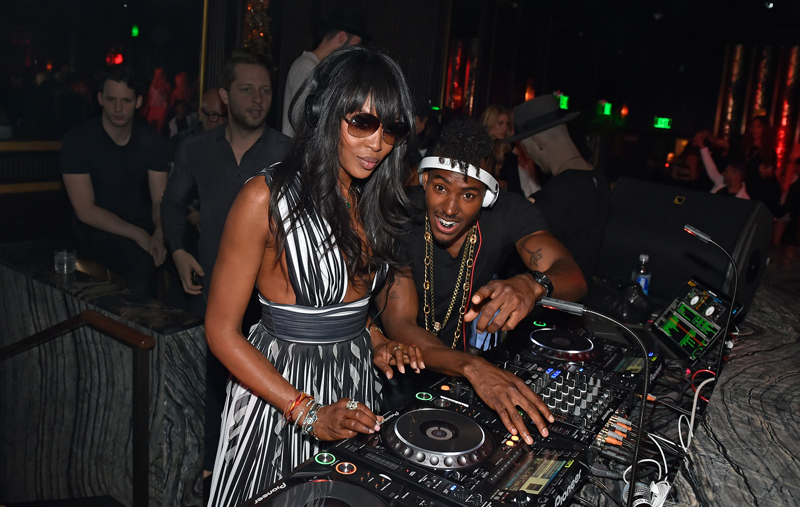 Need an excuse to head to Vegas for a weekend? May we suggest a trip to OMNIA Nightclub, which officially opened its doors at Caesars Palace on Friday night; it’s an instant Sin City game changer. The new club from Hakkasan Group welcomed guests such as P. Diddy, Gordon Ramsey, Sarah Hyland, and Teen Wolf cast members Holland Roden, Max Carver, Charlie Carver and Daniel Sherman into the stunning 75,000 square-foot multi-level venue. Man of the moment, DJ Calvin Harris, provided jams in the main room on Friday night, under a gigantic and gorgeous 22,000 pound chandelier that hovers over guests from the 65-foot-high ceiling. (This is not your mother’s disco ball.)

Your Daily spent most of the first night checking out the guest DJ debut (at last!!!!) of Naomi Campbell alongside DJ Ruckus in their lounge, Heart of OMNIA. The Queen gave full Naomi, spinning in sunglasses, a white Givenchy coat, and Burberry dress. The question on everybody in America’s mind was…What does Naomi Campbell play when she’s behind a turntable? We busted out our Shazam app to get a taste of her tunes and heard James Brown’s “Sex Machine”, Mark Ronson and Bruno Mars’ “Uptown Funk”, Chubb Rock’s “Treat ‘Em Right”, and Deee-Lite’s “Groove Is In The Heart”, to name a few.