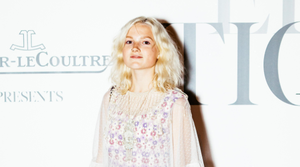 At just 19 years old, photography prodigy and Portland, Oregon native, Olivia Bee is taking the fashion world by storm with her youth infused lo-fi photos. She might be described as a female Ryan McGinley, and indeed, she’s cited the photog as an influence alongside Annie Leibovitz and Nan Goldin. At 15 she landed her first gig shooting a Converse campaign, and four years later she’s shot for everyone from Nike and The New York Times to her most recent work with Roger Vivier. Not to mention, she’s been spotlighted in W, ELLE, and The Guardian, to name just a few. We caught up with her at the Roger Vivier party at Paul’s Baby Grand for the unveiling of the campaign she shot with 21-year-old Atlanta de Cadenet Taylor for the re-launch of the “Virgule” heel to find out what it’s been like having her career take off before even finishing high school.
BY PAIGE REDDINGER

What is it like getting a campaign like this at 19 years old?
It’s great, because people trust me! It feels very good to have an iconic brand be willing to hand over a production budget and let me run with it. I’ve been shooting campaigns since I was 16, so it didn’t happen out of the blue.

After your big break—a campaign for Converse—who are some of your other clients?
Nike, New York Times, Hermes, Levis, Fiat, Zite Magazine, Teen Nickelodeon…I’ve done a lot of things!

How did you find the time to do that with school?
I graduated high school last year. I mean it was always just my priority, I would tell my teachers I have to go do my life.

Were your teachers cool with that?
Some of them were and some of them naturally weren’t, but it was my choice. I graduated with a 3.0 or something like that, so it was fine.

Where are you originally?
Portland, Oregon, but now I live in New York.

When did you move here?
In January. I love it! It took a while to get used to, but now that I have friends here and everything I’m really loving it! New York gets to be too much sometimes, though, and you need to leave the city. I’ve been in New York for three weeks, and that’s the longest that I’ve been here consecutively since I moved. I am so ready to leave for a bit! I leave on Friday and I am so excited! I leave a lot, but it’s always for work.

Do you ever get overwhelmed?
Lately, I’ve been working too much! Honestly, it has been really overwhelming, but I really love it. I wish I was working a little bit less. I got, like, five job offers today and I don’t know what I’m going to do. I have like no time to do any of them.

Who is your agent?
I am with Candace Gelman & Associates, but I’m also with Iconic Class. Iconic Class represents me for directing and stills in Europe. and Candace is for stills in the U.S.

How did Converse first find you?
On the internet, through Flickr.

What did you think when they first asked you?
I thought it was spam. I didn’t reply for 10 emails. It was through their ad agency, and I just didn’t know what an ad agency was at 15.

What do your parents think about all of this?
They are very proud of me, and they miss me! I haven’t been home since August. But I was shooting a lot in Portland this summer and I have a Hermes video coming out in a few weeks.

Was it fun working with Roger Vivier?
Yeah! I love giving old brands a makeover.

Where did you shoot it?
In Paris! I go to Paris every two weeks or so.

How do you spend your free time in Paris?
I like to go to the Le Carmen in Paris. It’s one of my favorite clubs there. I like to just hang out with my friends, walk on the train tracks, and get in trouble.