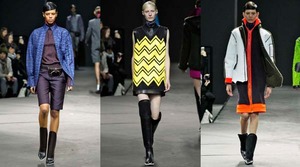 (NEW YORK) Alexander Wang
Chicly equipped for the elements, Wang’s urbane latest was a slick parade of pitch-perfect toppers in cocoon, anorak, and puffer iterations, over-the-knee black boots soled in white, and exaggeratedly chunky knits. Chevron stripes and mountain landscapes in jarring shades of chartreuse, cobalt, and violet accented the noir, grey, and navies that ruled the sleek collection, as did fluoro orange and green zippers. The encore? Dark, embossed and laser-cut leather ensembles as tough as the stoic stances and faces of Wang’s A-list mod troupe.

Mara Hoffman
Never one to shy away from tribal elements, Mara Hoffman delivered a riff on her signature look for a Fall 2014 collection. This time around, she nodded at Northern Africa, but with a touch of the Nineties, courtesy of Shaday. The influence of the pyramids made an appearance on a black jumpsuit, complete with a geometric outline. Sheer black pieces shrouded the body, but were embellished with plenty of sequins. A trompe l’oeil print emulated layers and layers of Moroccan rugs and each girl was decorated with layers and layers of golden baubles by Fililí by Luiny. We’d love to take a trip in Hoffman’s latest wares, whatever the destination may be!

Altuzarra
That whole Yves Klein blue thing is definitely not over. In fact, it’s alive and well, as shown by Joseph Altuzarra. He opened his show with the blue hue in the lining of a double face cashmere coat, and it kept making appearances throughout the show, on a jacket tie or as a layering piece. But that wasn’t the only notable color in the collection; magenta and orange made the same surprise appearances in between large swashes of black and light grey. While most of the collection was made of smooth silks, or soft wools, he included a nubby tweed with thick threads and pops of colors here and there that offered some relief of texture. While there were a multitude of furry toppers, there are two multi-colored plaid coats we’ll be seeing a lot more of. Just call them Joseph’s Technicolor coats. After all the colors were through, Altuzarra ended on a soft note, with a couple of pale white dresses. After all the excitement and color, it was a palette cleanser before he set us back out on the city streets.

Tanya Taylor
With dangling pompoms in the background, could Tanya Taylor present a show that was anything but playful? In a showing of black and white, there were flashes of neon, pretty pinks, touches of metallic and a few rabbit’s feet for good luck. While that might sound like nothing new, Taylor offered up a handful of prints to keep things exciting, from a graphic camera to a blown-up floral and a spruced-up plaid. A pink embellished dressed had beautiful movement, with silk petals fluttering with each step. A Mongolian fur collar touches added a certain oomph, especially in electric green, as did a pair of snakeskin flats with a rouged tip some more pompoms. During this heavily runway intensive time, it’s nice to be reminded that fashion can, and should be, fun! So for that, we thank you, Tanya.

See All the Pieces from Alexander Wang...