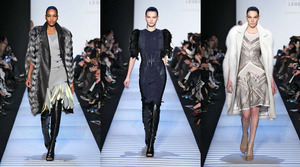 (NEW YORK) Hervé Léger
The audience that filtered into the tents for the Hervé Léger show proved to be like a walking advertisement for the brand. There was one bandage dress after the other, in all the hues of the rainbow. The runway told a different story though. Of course there were bandage dresses, but they were spruced up with cage-like seams and corsets that skimmed body-conscious shapes, some finished off with knee-length fringe. The jackets were quite attention grabbing, too, one with large feathered sleeves, another in thick white fur. As for the shoes? They were presented in an over-the-knee shape in a glossy leather with an open toe. In the always-changing world of fashion, we can always rely on Hervé Léger delivering sexy and glamorous looks.

Tibi
Before the show began, Johnny Cash was blaring from the speakers, as if to warn of what was to come. Was there an underlying country theme? You guessed it! But it was mixed with touches of urban influence and had nothing to do with cowboy boots or anything of the sort. Rather it was darker, more somber and very chic. There were Crombies, and lots of them, in blue, grey, black, and camel, that paired well with the brand’s foray into the accessories realm with large scarves and flat-topped hats. A hint of light blue denim here and there broke up the collection, offering a bit of casual respite between blazers and expertly tailored pants. The show notes pointed out that the clothing erred on the side of cozy, but due to Amy Smilovic’s sharp eye, nothing seemed lazy or messy. It was a well-curated collection featuring just the right amounts of diversity in textures, shapes, and feeling.

Christian Siriano
Evenings with Christian Siriano seem like they’d be a reminder of days of yore, when ladies were polished, powdered, and well put together. Which is exactly what his girl was like this season. A white strapless dress with one ruffle that was tucked into a waist belt was a vision in understated glamour while a silver jacquard dress worn by Anna Cleveland was anything but understated. In fact, the inspiration was the era when Cleveland’s mother Patricia was en vogue; Siriano found photos shot by Irving Penn and Fernand Fonssagrives that influenced the shapes he sent down the runway. While other designers are doing futuristic capes, Siriano is sticking with the original shape in clean lines in  pure white. His checkered print eased in nicely alongside jewel tones of emerald and amethyst, especially when pieced together to create a suit. When Siriano applied these vintage shapes to modern designs, his vision became the clearest, like a black silk gown with sheer lacy panels that hugged the body and created a va-va-voom shape, or a pair of sharp forest green leather trousers. Regardless, we wouldn’t mind being his girl of the past, as long as we got to wear those clothes!

Rebecca Taylor
Romantics take note! Rebecca Taylor’s got the recipe for dreamy dressing that doesn’t require an overdose of saccharine to achieve. Rather, the look is achieved with precise jackets, a discretely placed panels of fishnet, and slouchy pants, all finished up with bed head hair and bee-stung lips. Should you desire a piece in pink, there are options, like a golden brocade dress and sweatshirt, but let us point you in the best direction, in the way of sexy leather pants and cocoon coats in mauve shearling and purple fuzz. Taylor looked towards Paris for some inspiration, but it wasn’t the well-dressed women of the streets that caught her eye. Rather, it was the graffiti artist Philippe Baudelocque, whose art litters the walls of the city. This would explain her collection of tough love pieces, from edgy bomber jackets to quilted mini skirts and everything in between. This was a collection that will please her loyal customer base. Taylor made to wear.