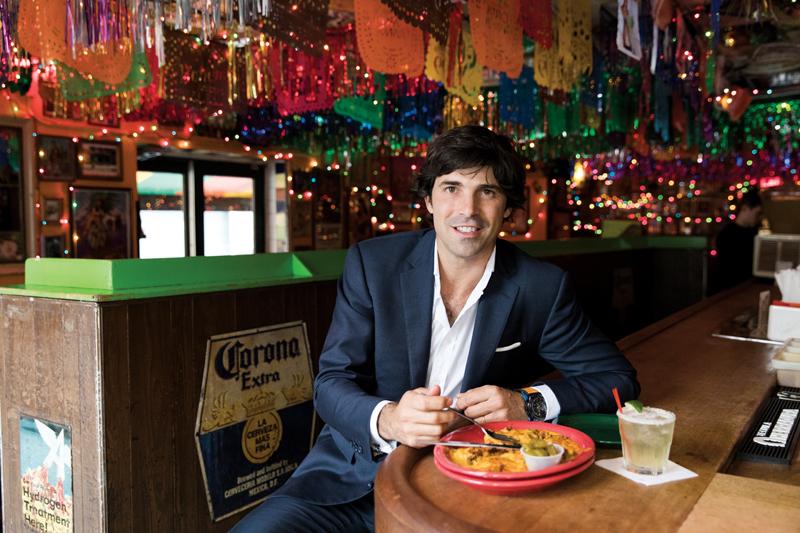 Polo superstar Nachos Figueras recently marked his 10th year as a player in the Veuve Clicquot Polo Classic. How to celebrate? How about some nachos! The Daily Summer recently lunched with the Argentinian hunk at Tortilla Flats to chat about turning 40, life on the East End, and how he keeps track of his massive collection of horses.

How are your nachos?
Excellent. I love Mexican food, especially guacamole. I actually don’t eat it very often because I try to keep my carb intake low. I turned 40 this year, so I have to take care of myself! In Argentina, nachos are not a real thing unless you go to a Mexican restaurant.

Why were you named Nacho?
It’s a nickname for Ignacio, which is my real name. In Spain, all the Nachos are Ignacios.

How did you feel about turning 40?
I’m fine. Age is just a number, so I don’t mind. It is a number, though! Forty! You start to feel like you’re on the other side of the cliff.

What did you do to celebrate?
You want to know the truth? [Laughs] I played snow polo in Montreal. My wife wanted to kill me. I committed to the event over a year ago, and I couldn’t pull out of it. I eventually celebrated at a family reunion.

You’ve been coming out East for 18 years. What do you love about it?
Everything! What’s not to love? I love it, my kids love it. I get to play polo, the beaches are right here, and I have a lot of friends because I’ve been coming for such a long time. I normally stay the entire summer. When I am there, I am there!

What area do you prefer?
Sag Harbor. I just love it. It’s in the middle of everything!

What restaurants do you frequent?
Nick & Toni’s, The Palm, the Old Stove Pub, Sen. I’ve been going to those for a long time!

Do you keep any horses in the Hamptons?
Fifteen! I have 300 horses in total, mostly in Argentina.

Is that in some kind of Guinness Book of World Records?
No! [Laughs] I actually used to have a lot more. I had around 550 and then a few years ago, I decided to downsize because I was starting to lose track.

How do you even name 300 horses?
I have mares that I breed from. We do something called embryo transfer, so I get two or three babies out of the same mare every year. We take embryos out of the best mares we have and put them in surrogate mothers. Every mare has a theme, so I have names of magazines, hotels, museums, rock bands, singers, actors. There’s a Shakira, Beyoncé, Rihanna, Morissette. When I read the names of the horses, I know who the mother is. Although I know it anyway!

Do you think you’ll give up polo in a few years?
No, no! Never. Though at 45, you start to feel that your reflexes are not the same. I’m already not as fast as I was when I was 20, from a reaction standpoint, but I’m a little bit wiser. You know what’s going to happen and start to anticipate it. Polo will be my thing for a very long time. I’ll play until my body says, “Enough!” That will probably not be until I’m 70.

Which up-and-coming players do you admire?
There are a lot! Facundo Pieres is a young guy who is really great. Right now, I’m more focused on my son’s career than I am on mine. My focus when I wake up every day is how to help him become a better player.

You’re still at the top of your field. How does that feel?
It’s a responsibility, but in a good way. I want to continue to represent my sport and country and the brands that support me.

You and your wife have also written some books. Tell us more!
They’re romance novels—spicy ones! [Literary agent] Luke Janklow is a friend of mine, and we were eating out and he said he had this crazy idea! He said, “I know how passionate you are about promoting polo and I think a romantic novel could really get it into a lot of new homes. Women would love it!” When I told Luke that I would do it, I wanted to make sure that it felt right—everything would be truthful to what polo is about. We ended up doing three books that are available in Spanish, German, and English.

What else do you want to do?
I really hope these books become movies—not because I want to be in the movie business, but a film would really help polo and educate people. Kind of what Days of Thunder did for NASCAR!

Now that we’ve conquered nachos, any restaurant recommendations for Argentinian food out East?
Not really! We make a lot of barbecues at home. Maybe I should open one. You just gave me an idea.

PLUS! Stars and insiders weigh in on how they like their nachos…

Olivia Culpo: “With shredded chicken. I’m not a huge sour cream fan though!”

Brian Mazza: “Nachos aren’t part of my diet, but when I have a cheat day my nachos are extra loaded. Go big or go home.”

Andrew Saffir: “With real cheese, not the orange stuff, preferably in a lounge on the way to Careyes.”

Sailor Brinkley Cook: “I like them vegan, so with vegan cheese. They do them really well at the Butcher’s Daughter.”

NEW YORK, NY – MARCH 22: Andrew Saffir attends A24 And DirecTV With The Cinema Society Host A Screening Of “The Blackcoat’s Daughter” at Jimmy At The James Hotel on March 22, 2017 in New York City. (Photo by Dimitrios Kambouris/Getty Images)

Wanderlusts: Net-a-Porter’s Alison Loehnis on the Hamptons, London, and Beyond