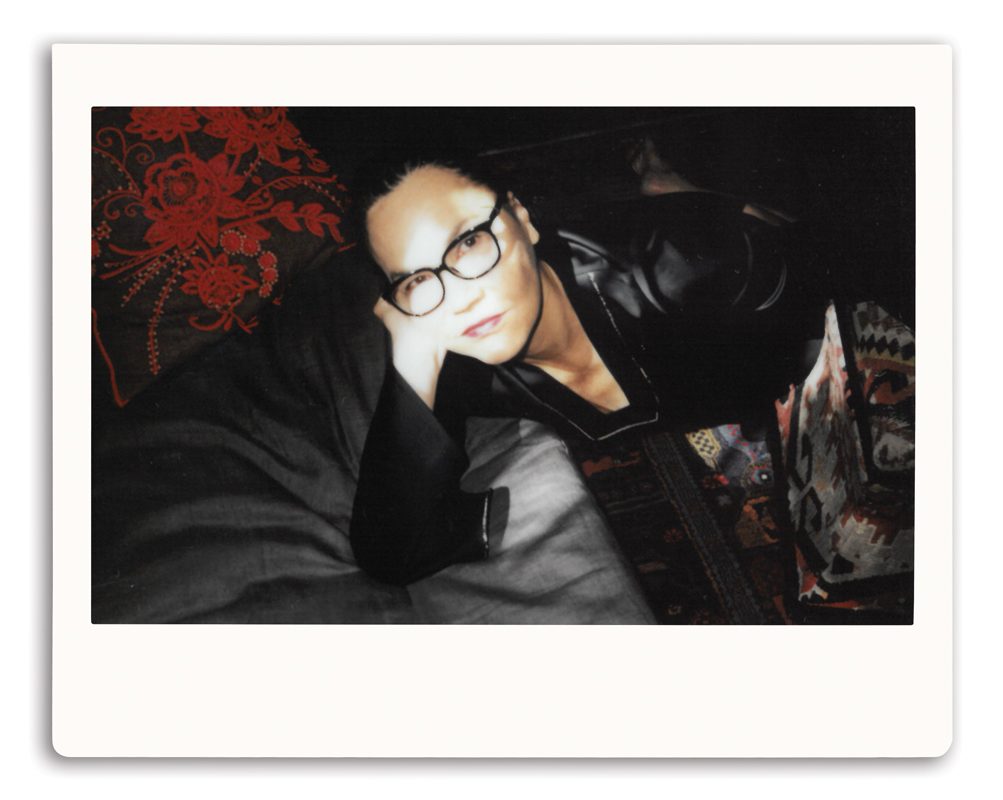 For years, the industry’s secret weapon has been Patricia Black, creative director of Albright Fashion Library. The brainchild of Irene Albright, the library has been stockpiling some of fashion’s best creations for years, and accordingly, it’s an essential resource for stylists, designers, celebrities, and just about anyone in need of problem-solving. “Call Patricia” has long been the phrase uttered in certain in-the-know circles—so we called Patricia.
PHOTOGRAPHY BY RYAN LIU
POLAROID PHOTOGRAPHY BY KETEVAN GVARAMADZE

What brought you to New York City?
Toward the end of the ’90s, I had another life, as a housewife in Atlanta. My marriage ended, and some friends told me to come to New York. At that point in my life, I wasn’t interested, because I looked at it as a place to go when you’re young and full of huge dreams. But I got a job working for a New York–based photographer in Atlanta through an agency I had done a couple of styling jobs for…and because of her, I got booked on a job in New York for three months. The creative director she was working with wanted to keep me on. I thought, “Oh, and they pay you how much to do this? Okay!” I had a house to pay for, and I was fighting for my independence. It was so grueling to be here; it was so expensive, but anything was possible. I decided to reinvent myself.

What were you doing when you first arrived?
Styling. I was mostly just trying to make money, so I did a lot of advertising jobs. And I always wanted to be an actor—I had dabbled with it in my youth—so in 2007 I started going to acting school while working at Albright. I’m doing Shakespeare’s Coriolanus soon with the Combative Theatre Company.

How did you end up at Albright?
It took me a while to figure out how to support myself. Fortunately, I met Irene Albright. Her business was called Imelda’s Closet back then. I was just doing cameo appearances working at the store, which helped me support myself while running from a voice class to a dance class, to a movement class to an opera class. Irene said, “When you’re not working, come hang out with me!” So I did. It was a good way to meet everybody and see how they do their jobs.

Where did you land next?
One day a gentleman named Bob Weinstein, who worked for Concrete Brand Imaging Group, came into Imelda’s Closet and said, “What are you doing in a place like this? You should be working with me.” We phone tagged for about a year until we decided to work together for a day and see if we liked each other. He made me sit with the graphic designers, art directors, art buyers, and editors, and I gave them my point of view on everything. It turned into a job. That was really a gift, to have somebody trust your intuition and your instinct. I danced with him for a couple of years, and then 9/11 came and I found myself kind of out in the landscape again, on my own.

What brought you back to Irene?
I ran into Irene again, and she had just bought the place that is now Albright Fashion Library. I suggested that I could come in and help her put the showroom together. She really empowered me. I don’t know if it was just the luck of the draw, but all of a sudden, all the editors from French Vogue were coming here, and all the girls from Australia, Tokyo, and London, too. We were getting a different clientele than what we had before. Fashion was changing, so the buy was different. Prior to that we were very minimalist and grunge—there was no jewelry or fluff; it was just simple, clean black dresses.

Was the business concept the same?
Yes, it was always about rentals. Irene was a stylist in the ’80s and ’90s, and in those days you didn’t have a place like this. You had to buy clothes, and then return them, for certain shoots. At that time, it was strictly for the industry, and we were buying only sample sizes.

How did Albright evolve?
All of a sudden, we started moving into this whole celebrity moment, with celebrities on the covers of magazines and appearing in the advertising. They come in all shapes and sizes, so we had to change the buy a little in terms of sizing. Then we opened it up to anyone who needed to rent a look for an event. I discovered that there were a lot of women who were working on Wall Street, for example, who were climbing the ladder of success and now they had to go galas. They came to us for the perfect dress or shoe. There are other places that offer similar types of service, but we provide one-on-one attention, and on any given day, we’ll have everyone from Kate Young to Pat Field to Leslie Fremar in the room, offering their own suggestions. You might be styled by a top stylist, if you come in on the right day!

How many pieces does Albright buy each season?
We buy about 20 to 25 pieces each from 40 designers a season.

What would we find in your own closet?
There’s a new designer, Tamuna Ingorokva from Georgia, the country. I love her fabrics. I love the minimalism of it, and that it’s off the radar at the moment. I also wear a lot of Dries van Noten and Comme des Garçons.

What has been one of your favorite shoots to pull for?
We just did a project with Catherine George, a costume designer who works a lot with Tilda Swinton. So a few weeks ago, Tilda was here in the showroom with Catherine figuring out the look of a character she is going to play. The references were everything from Martha Stewart to Peggy Guggenheim. There were so many wild and inspiring references they were throwing at us. We had a lot of fun putting together looks. Tilda won’t actually wear the pieces, but they’ll take them to the seamstresses to show them the shapes and colors they want. In that way, we’re a research resource.

What’s next for Albright?
We just opened up in L.A. a year ago. We were just a little gun-shy about going there, but an opportunity presented itself, and Irene packed up a few trunks of clothes, took a house in Beverly Hills, and opened up shop. We’re still building the inventory. Our clients understand that the collection is theirs as much as it is ours. We rely on them as much as they rely on us.

The Goop Troop: Meet the Digital Darlings on Team Gwyneth