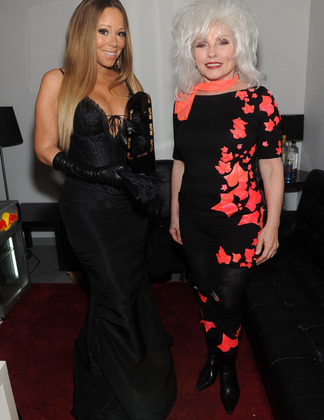 Darlings, Mariah Carey will get on the stage when Mariah Carey wants to get on the stage. Last night at the Out100 Awards presented by Buick, Mrs. Cannon took her sweet time after Jonathan Groff, Murray Bartlett, and Frankie J. Alvarez (stars of HBO’s upcoming show Looking) introduced her to present the Entertainer of The Year awards to Lee Daniels. As the clock ticked and ticked and ticked, she finally came on stage in a tight black dress carrying a fan, because that’s what you do when your name is Mariah Carey. “I may be a straight girl, but my boobs have been out for years,” she joked to the crowd before lauding her friend and frequent film collaborator Daniels, who wasn’t able to attend. Mariah warmed the crowd up for what proved to the be the highlight of the night: a live performance by the iconic Debbie Harry in a wig straight out of Lady Bunny’s closet. A few names we spotted out and about at Terminal 5 were host Michael Urie, Edie Windsor, Sherry Vine, Italo Zucchelli, Josh Wood, Sharon Needles, Laverne Cox, Emerson Barth, Michael Musto, Rob McGarry, Lea DeLaria, and Out‘s EIC Aaron Hicklin.