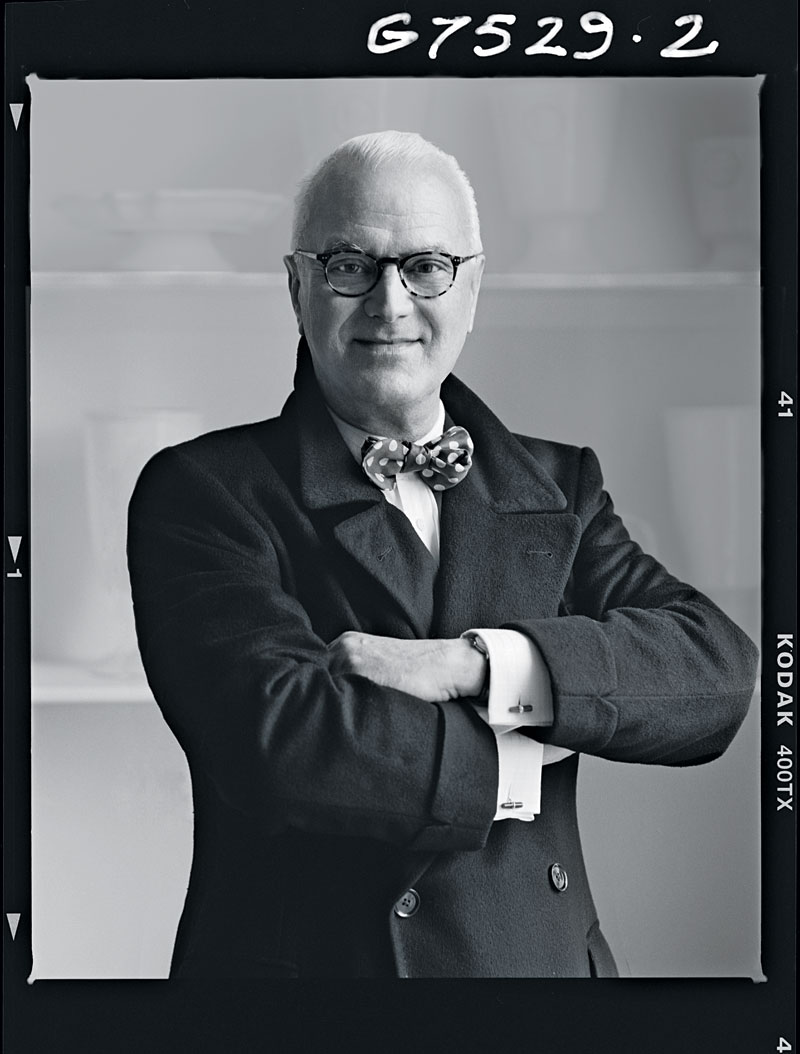 Hello, Mr. Blahnik. Where are you right now?
I’m on the coast of Africa, but don’t worry! I’m coming to New York.

How do you feel about the honor?
It’s a great privilege. Do I deserve this? Do I deserve anything? I just do what I love to do. On top of that, they give me awards! I don’t know! Sometimes I don’t think I deserve it.

Stop that! Have you thought about your speech?
I haven’t. Maybe I’ll read lines of someone. I’m a very spontaneous person. Maybe I’ll write it the night before.

You have a book coming out in this month, Manolo Blahnik: Fleeting Gestures and Obsessions. What’s it about?
Very simply, it’s about the people who have always been there for me. People who I grew up with and loved in my youth. There are people that I wrote about—most of them are dead—who really influenced me as inspiration, or something about them made me click.

Who’s included?
Gore Vidal, whom I love. He’s not here anymore, but I love him and his work. Marie Antoinette, Cecil Beaton, the works of Goya and Velázquez.

Were you friends with Gore Vidal?
I wouldn’t call us friends, but I met him five times in my life, and he was a very charming man and very caustic. Very nasty sometimes, and I loved that. His sense of humor was very American. He’s one of the people I really loved. I once had Gore Vidal snap at me for calling him too early in the morning, which was an honor. [Laughs] The last time I saw him was when he talked in London and people were asking him nonsense about Obama. He was not interested in that at all. He still had that nasty thing in his eyes—a kind of irony. I was really conquered by it.

Diana Vreeland is mentioned in the book.
Of course. Oh, my God. She’s more than a legend. I was born seeing pages of Ms. Vreeland’s in Harper’s Bazaar and, later, Vogue. I got to meet her and she advised me to do shoes, and here we are. The book is about people who were paramount in my life. Women whom I adore.

Are you surprised the younger generation is still smitten with Diana Vreeland?
No! She’ll be remembered by millions forever, for life. She’s never going to go away. Some people you don’t hear about anymore, some people disappear. Ms. Vreeland was beyond. I give lectures, and people always ask about what she was like. That’s not going to disappear for at least 100 years.

Anna Wintour is also a huge fan of yours.
It’s a great honor! Are you kidding me?

Do you tell jokes?
I don’t know how to tell a joke! I’m not even good at telling funny stories.

You’re very humble for a man of your stature.
I was born like that. I cannot change. I’m simple. I hate when people say, “You’ve got an award! How wonderful!” I’m grateful, but I’m humble, yes.

How do you define a divine shoe?
I don’t know which one is my favorite type of shoe, but what I love to do is richness. I love to have the best velvet, silk. I’m totally out of touch now with what people like or do not like. I do what I do and that’s it. I like to do opulence.

Any idea how many pairs of shoes you’ve created over the years?
If you believe the lady from the archives, I think I have made about 20,000.

Have you ever been able to try them on yourself?
Uh, no. I used to wear them at the beginning of my career because they were size 40, but now that the normal size is 37, I can’t wear them anymore.

Do you follow pop culture?
Sometimes, when I’m interested. I used to go to the concerts. Can you imagine? At my age! Going to the concerts! I went to see that naughty and lovely girl who died, Amy Winehouse. I don’t like the new singers. I stopped being impressed by Madonna.

What did Sex and the City mean to your brand?
It feels like a prehistoric thing now, but it was very exciting at that moment. It made me known in America.

What’s new with the brand?
We’re trying to launch a line of bags. I always did one or two a year, but I’m going to do a small collection. I don’t want it to be big, but I want it to be accessible to youngsters.

What would you be doing if you weren’t designing?
I would be happy as long as I was healthy. I would do anything with stones, sculptures, and houses. I would be doing that seriously. For a moment when I was 19, I wanted to do that, but “they” derailed me!

What are you doing on the coast of Africa?
My mother had a property that she left to us, and I’m here with my dog, a divine and wonderful Labrador named Romolo. He was named after the great comedian in Italy. It’s not very glamorous, but I adored him. He was so fabulous. My dog knows me better than anybody. I love animals more than people, really.

Why?
The dedication. They don’t ask you anything at all. They only want attention and love.

How do you want to be remembered?
I have had so many ups in my career, and I’ve met so many wonderful women and people. My career has always been okay. The thing I loved the most was when I was with Kate Moss and Naomi Campbell, who introduced me for an honor [at the CFDA Awards in 1998]. Can you imagine? I was really neurotic and somebody tapped my back and said, “Hello, my dear!” and it was Elizabeth Taylor.

Did you know Elizabeth Taylor?
Of course!

You never know. Young people don’t even know who Julie Christie is! What did she say to you?
Ms. Taylor said, “Don’t be afraid! Don’t be nervous! They’re just people!” It was divine. A milestone. I’ll always remember that day.

You’re a true legend yourself!
Oh, please. Maybe you say so. That’s very kind of you.