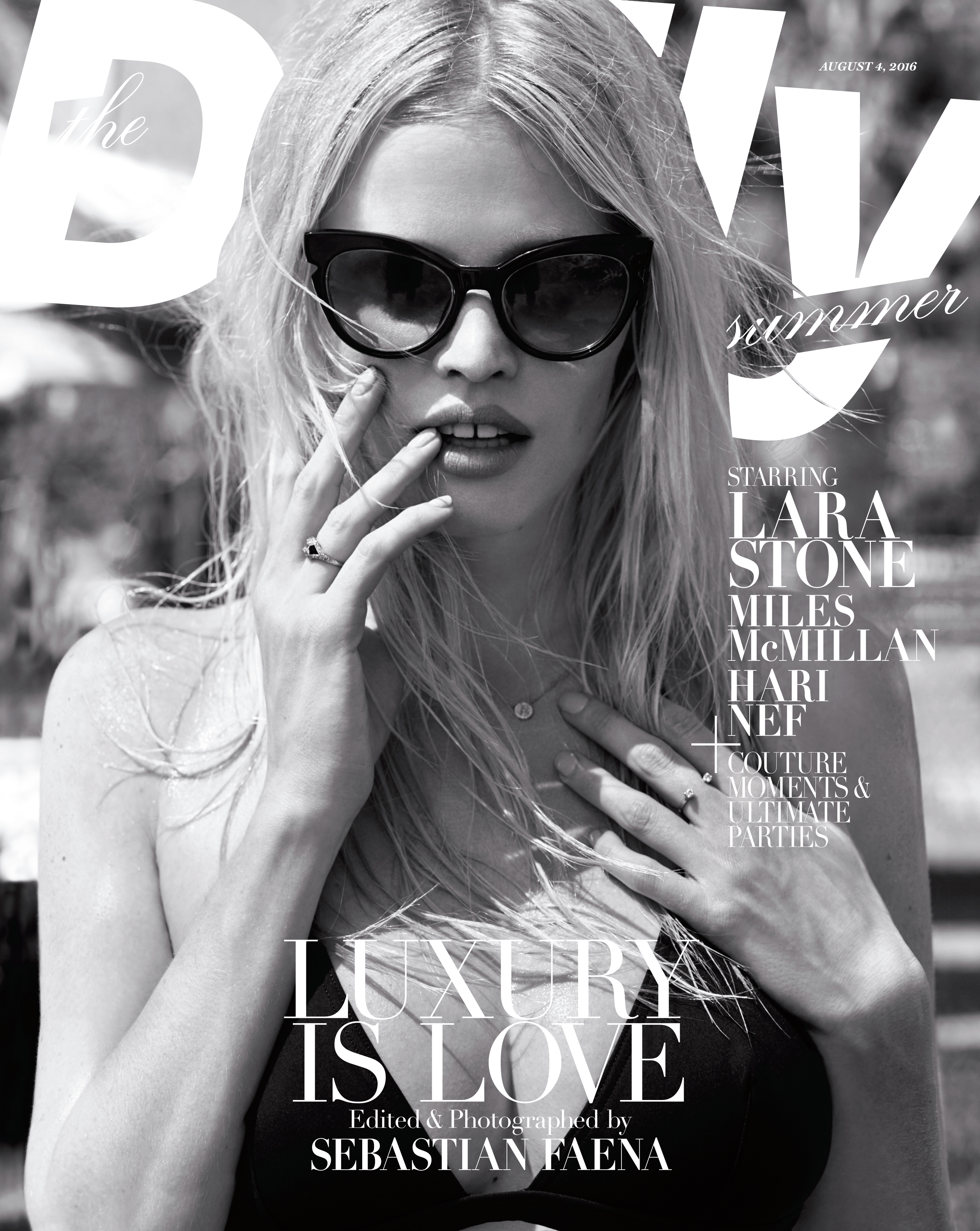 Groundbreaking photographer and director Sebastian Faena has partnered with The Daily Front Row to guest edit the Luxury Issue of The Daily Summer, out on August 4. Entitled “Luxury Is Love,” Faena’s portfolio highlights some of the top talents in the fashion world that he felt embodied modern luxury, including cover subjects Lara Stone, Miles McMillan, and Hari Nef, as well as creative legends such as editor Carine Roitfeld and hotelier Alan Faena. The images were shot at the Faena Hotel in Miami Beach.

“What is Luxury to me? Luxury is the freedom to be unique and to have ideas of your own,” says Faena in his editor’s letter. Born in Buenos Aires, Faena began his career as a film director before turning his talents to photography.  Faena was one of the first photographers to photograph some of pop-cultures most prominent names, including Lady Gaga, Gigi Hadid, and Kate Upton. He has collaborated with a wide array of publications, including Vogue, Vanity Fair, Harper’s Bazaar, CR Fashion Book, V Magazine and Pop, among others, and brands from Diane von Furstenberg, to Cavalli. Read the full issue HERE.

“An Essay on Luxury” by Sebastian Faena

Luxury is to cancel a party to stay home alone to watch a film on TV
Luxury is freedom
The freedom to be unique and to have ideas of
your own
To me, nature is richer than any piece of jewelry or castle or garment
A sunset is the most luxurious thing I can think of
A friend I had since I was 10, who knows what I’m thinking before I do, and feels that I would put her needs before mine, and that I could not live in this world one day without them
That is luxury

Luxury is having shameless dreams
Courage
Luxury is not being afraid, knowing that fear is
never an option

Luxury is loneliness and an animal you love more
than anything in the world
And not being scared of how people will judge you
for this, or anything else you do

Luxury is my father
The wisdom of old age

The biggest luxury is unconditional love

Not having an agenda and, like Jesus said,
Love thy neighbor as thyself
If you forget all else, remember this one thing and
you’ll be fine
Luxury is the air I breathe and seeing the sun in
my dog Luisa’s hair
Her yellow eyes and velvet-brown soft skin
Luxury is refusal

Luxury is those months, the months where she was
fading away and I left the world behind me to
spend them with her watching sunsets, the snow
falling, and the fire always burning next to her
bed facing the horizon where the ocean and sky
meet, while listening to Wagner’s prelude for
Tristan und Isolde, Tchaikovsky’s Swan Lake,
and the night she left, Queen’s “We Are the Champions” and The Beatles’ “Blackbird”

Hari. She represents luxury, because she believes
that everyone deserves the choice to just be who
they are. She is a woman. Also she believes in
happiness and a world beyond the rainbow, where
little multicolor birds fly and dreams really do
come true

Alan built a new world in Miami and changed
everyone’s perception of the city. This never
surprised me because since I was born I saw him
creating his very own universe. I still remember
the lightbulbs coming from under his ’80s carpeted
teenage bed

She’s my childhood idol, and maybe the biggest
luxury I have today is working with her so much,
to call her when I wake up in the morning to talk
about a dream that I’ve had, to think of her not
just as family, but as a true friend
Not to mention her unreal ankles and hypnotizing
green eyes
I think a wonderful, athletic, born-with-it body is
a luxury

Miles is pure luxury—he just talks, walks, thinks,
and feels freedom
Also he has the luxury of impeccable taste
Not to mention thoughtfulness, childlike sweetness,
and razor-sharp humor
And I have the luxury to call him my brother

Luxury is Lara, who will always say what she thinks
and would not hesitate to punch someone in the face
if they attack a friend of hers. She knows, without
knowing, that the best luxury in life is to defend
your loved ones
Together, shooting for this issue, we shared the
luxury of our “best day ever”
But the first time she worked with me she stopped
the studio shoot (not my favorite place to take a
picture) to tell Carine, “I f**king hate him”

It is a luxury to change your mind as much, and as
radically as you please
Only stupid people don’t
Luxury was the afternoon I drank a few dirty
martinis and called Ivan Bart in Paris to say, “I
know I want to make films now but I never want to
stop taking pictures, because it makes me happy and
I want to be represented by WME/IMG to do both” And
he replied “Done“ just one word, then three “It is
done” in the very moment, the same way I signed the
contract without even reading it because I’d rather
read his eyes

Luxury is Celine Dion, the day I shot her in her
Jupiter Island home (next to an early teacher I had
of what luxury means, Carlyne Cerf de Dudzeele) and
she became just the chicest, most exciting subject
I ever photographed

How a few months later she wrote a generous,
beautiful letter for me to get my green card

The first time I used it at the airport and it
took me five minutes to get from the plane to the
car, because after years of queuing for hours I had
earned that green card

Karen Carpenter, Barbra Streisand, Julie Andrews,
Lana Del Rey, Jenny Lind—the biggest luxury I can
think of is to be a songbird

And humility, unpretentiousness, this I learned
from Celine Dion

Luxury is finding your dream and going after it,
without ever sucking up to anybody and choosing
where to be, regardless of the consequences, being
reckless

Unconsciousness is a luxury

Luxury is Whoopi Goldberg in Spielberg’s The Color
Purple saying as she runs away from her husband:
“I’m poor, I’m black, I may even be ugly, but, dear
God, I’m here, I’m here!”
Gena Rowlands in the last shot of Cassavetes’
Opening Night giving a hug to the wife she’ll never
be and the life she never had
Adele H, spending her love away for a man who never
loved her back
This Truffaut film might be ultimate idea of all I
love
Ending your life in a asylum if you can’t fit in

Scarlett O’Hara, another early inspiration,
deciding she can’t think of this today, she’ll
think of it tomorrow
Eve Harrington and Margo Channing, how the films
All About My Mother, Opening Night, A Streetcar
Named Desire, and All About Eve talk to, and
complete one another
The disappearance of Monica Vitti’s friend in
Antonioni’s L’Avventura
The end of Fellini’s Nights of Cabiria, where
Giulietta Masina, playing a prostitute who had just
been robbed of all her money and illusions of love,
smiles into the camera and smiles in such a way

The beginning to the preface of The Picture Of
Dorian Gray, where Oscar Wilde writes that “All art
is quite useless,” otherwise it cannot be art

This drawing I made when I was 6, portraying the
Miss Punta Del Este beauty contest, and the fact
that many years later I make my living doing pretty
much the same thing. 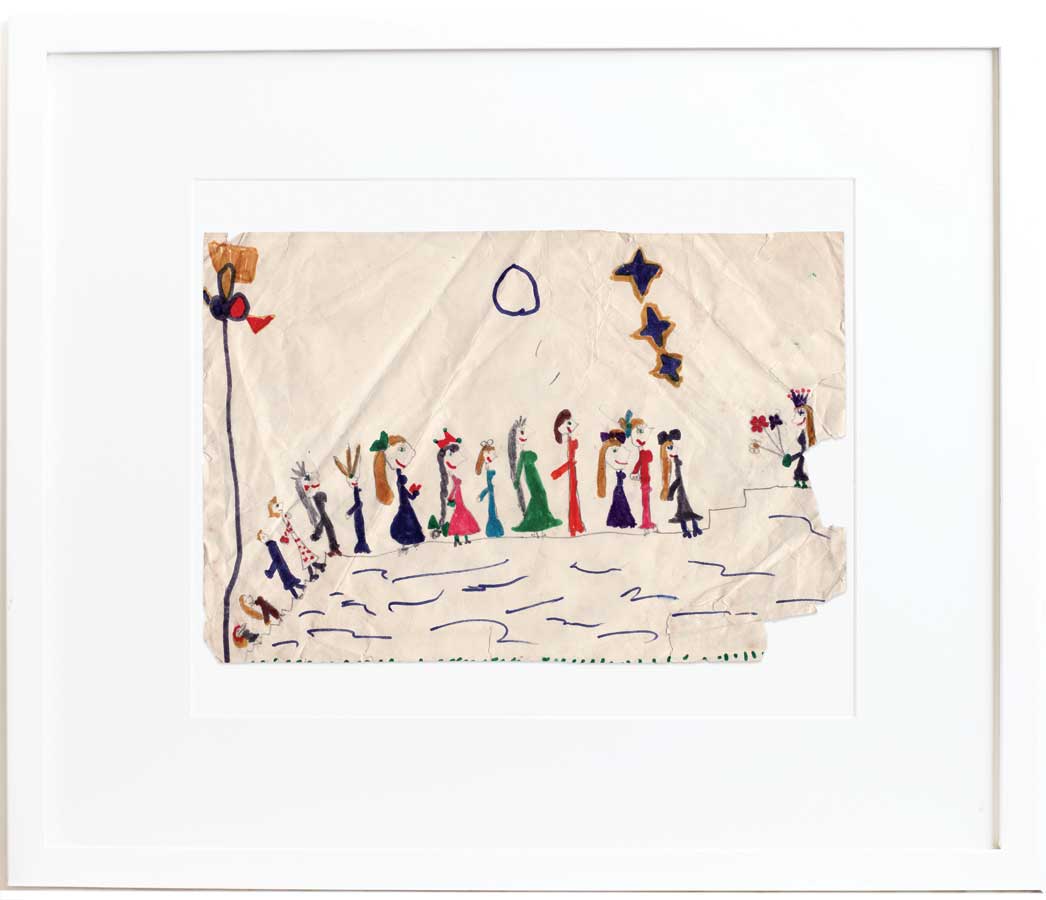 Timo Weiland on His Retail Lab Pop-Up at Cadillac House