Love (And Pierce Brosnan) Is All You Need 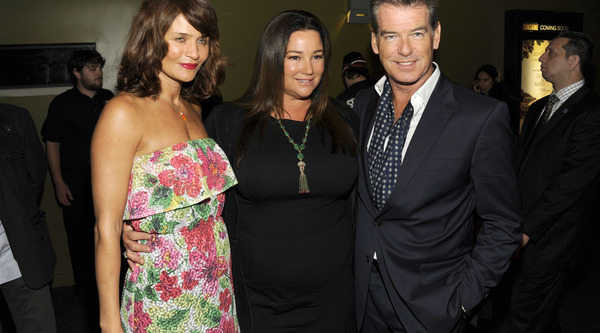 (NEW YORK) Love and a big bag of popcorn was all we needed on Wednesday night for the premiere of romantic comedy Love Is All You Need, hosted by The Cinema Society and Disaronno at Landmark Sunshine Cinemas. In a nutshell, moviegoers witnessed a beautiful film about falling in love…and Pierce Bronson with his shirt off! Ooh la la!

Onto the silver screen gist for the Suzanne Biers-directed film: Trine Dyrholm plays Ida, a woman recovering from breast cancer, who walks in on her husband cheating on her with a co-worker. She then travels to southern Italy for her daughter’s wedding and meets Philip, played by Brosnan, who is the father of the groom. Shocker: romance ensues. If you think a family wedding taking place in a Mediterranean setting sounds a little familiar for a Brosnan film, you’re not far off. Mamma Mia anyone? “There are definitely similarities,” Brosnan agreed. “They both deal with love and a wedding and magnificent occasions, but the world is safe: I don’t sing in this!”

Singing or not, Bronson looked quite dapper and suited up. It was easy to understand Bier’s reasoning for casting him as the leading man, “Trine, who plays the female lead, finds in the beginning of the movie that she’s lost everything. So then, what do you want for her to have at the end? Pierce Brosnan.” But of course!

Chanel Takes Over The Odeon

A Match Made In Heaven! Anine Bing...