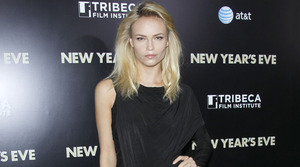 Love (And Pierce Brosnan) Is All You Need

From The Daily Brides: A Moment With Artful Bachelorette Owner Samara Hodgson