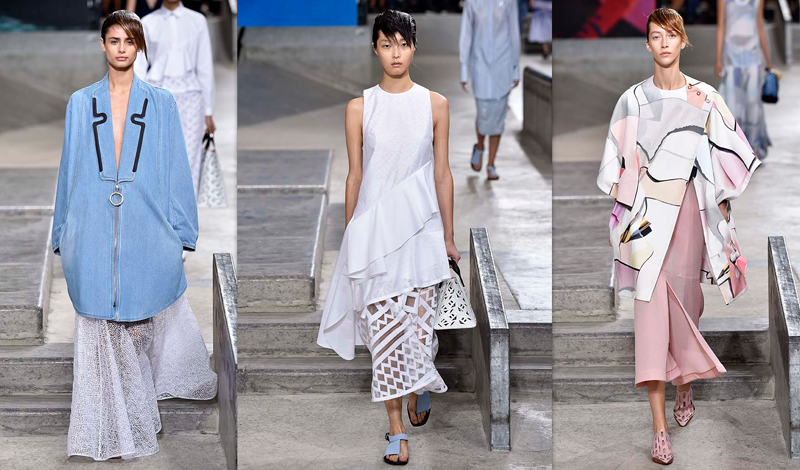 Carol Lim and Humberto Leon know all too well that staging a fashion show has become more like a theater production. For their Opening Ceremony line‘s Spring showing in New York, they took that notion literally by producing a play written by Spike Jonze and Jonah Hill, starring the likes of Elle Fanning, Catherine Keener, Dree Hemingway. In Paris for their Kenzo collection, they invited editors to a giant indoor skate park called EGP 18,  located on the outskirts of the 18th arrondissement, on Boulevard Ney. But at least they offered up some pre-show coffee! Everyone knows that a Lim and Humberto showing means a spectacle is expected.

As guests entered the venue, they climbed down stairs through giant concrete skate bowls to stadium-style bleachers that served as seating on four sides of the venue. On enormous screens throughout the middle of the space, giant avatars told the crowd in several languages, “Kenzo would like to remind you there is no Planet B. Please protect what is precious.” And while Lim and Leon often use their shows for environmental messages, the clothing itself did not overtly tout a political message. What followed were skate culture and rave-inspired clothes, like oversized denim pants with legs so big that each could separately stand on their own as skirts, topped off with equally oversized zip-up tops. Long maxi dresses in pastels looked romantic from afar, but up-close were made out of athletic-esque mesh and worn avec plastic lavender sports glasses with Kenzo branded on the side. Some of the palazzo pants, done in a pink pastel painterly pattern, might have been right at home in a club surrounded by twirling glow sticks. But some ’20s silhouettes mixed in kept the kitsch at bay.

Post-show, the models remained in place at the center of the skate park, so guests could come and inspect the clothing up-close. It’s a democratic format that Etienne Russo, producer extraordinaire for Kenzo, is known for creating at other shows he produces, quite like the most recent Dries Van Noten showing. It also promotes that community vibe that Lim and Leon are so known for cultivating. After the show, some guests even lingered in the courtyard to sip coffee and take in the scene.