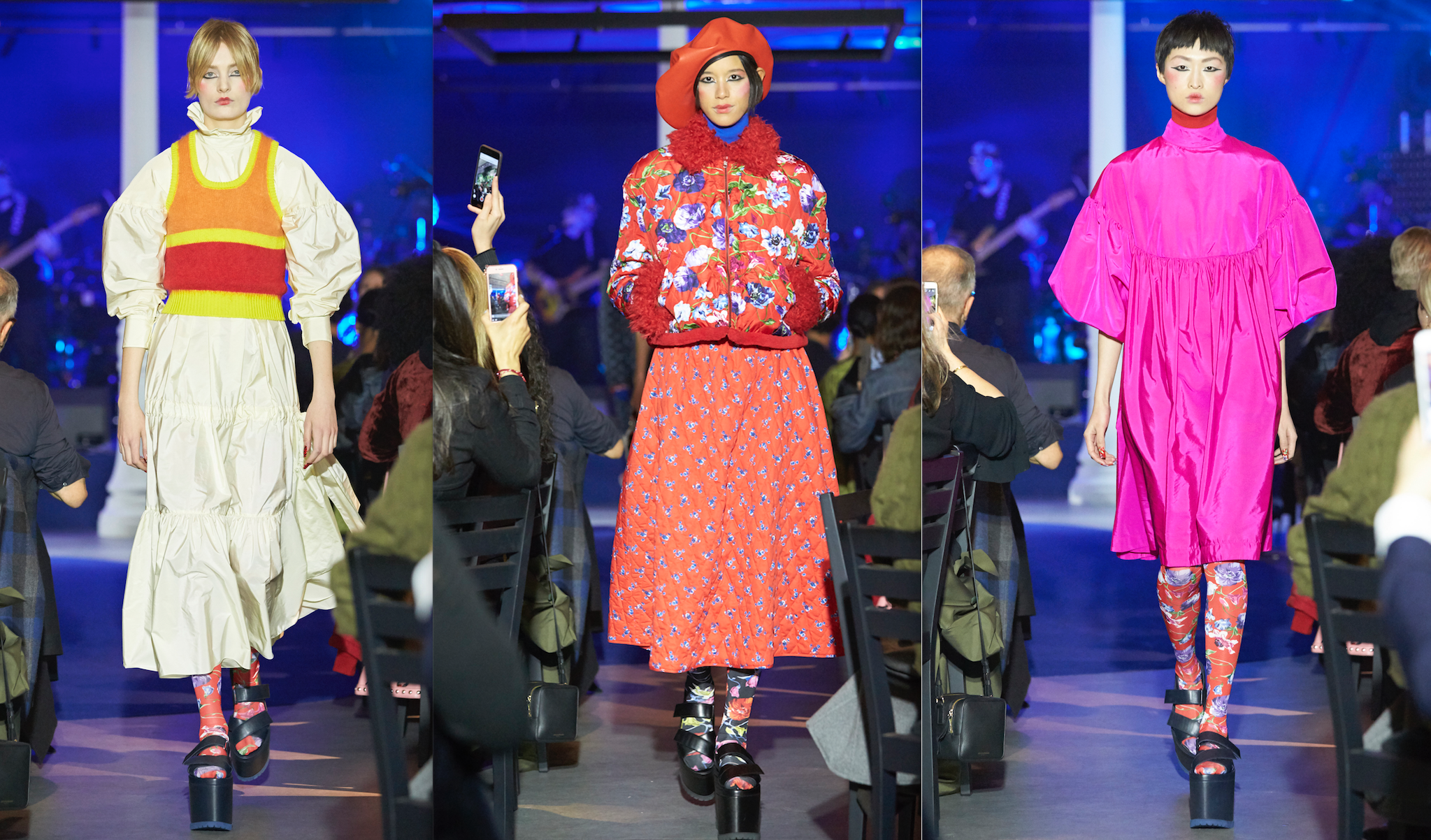 Carol Lim and Humberto Leon have been experimenting with their show format for quite some time now. Most recently, they showed their collections for Opening Ceremony at the New York City Ballet in January ahead of the traditional New York Fashion Week schedule. Generally speaking, Lim and Leon are always ahead of the curve in thinking about how fashion functions in modern times—they more or less created the idea of the concept store, after all—and they have always wisely understood that fashion is about context.

This season for Kenzo, the design duo invited guests to the Kenzo HQ in Paris for a dinner of sambusk lihma, baklavazaatar labneh, and halaweit aljaben prepared by the Syrian-born Parisian chef Mohammad Elkhaldy. The space was decorated with images from Kenzo’s famous 1983 campaign starring models Syoko and Iman, who was at the debut of her career, shot by Swiss photographer Hans Feurer. “At the time, when Kenzo asked me to do pictures for him, he didnʼt really have a concept of how he wanted these pictures to be. I had this idea of doing extreme closeups and sort of suggesting without really showing. So I asked him how far I could go. What if I wanted to only do close-ups of womenʼs eyes?” read a quote by Feurer in Kenzo’s show notes. “He said, ‘If thatʼs what you want, do that.’ He gave me complete carte blanche. His trust was absolute, it was really extraordinary. I shot almost all the Kenzo campaigns with Françoise Ha Van, an extraordinary stylist. Her touch can be seen in all the pictures.”

The collection paid tribute to Kenzo Takada’s now archival designs pictured in these campaign images and collections from the ’70s and ’80s. Some, like a cream taffeta ruffled smock dress (Fall 1981) styled with a multicolored tank top (Fall 1971) or a red puffer jacket with iconic Kenzo flowers or a hot pink taffeta baby doll dress (Fall 1981), were very close if not almost exact replicas of early designs by Takada for Kenzo. “As soon as we saw the floral prints in this collection, we knew that these would become the starting block for the rest of the pieces,” said Lim and Leon in their show notes. “We subsequently looked further back into the archives and were intrigued by garments from other seasons, most notably knitwear and dresses from Fall 1981. A wool beret from Fall 1971 inspired our women’s tailoring.”

It was a moving tribute to the 78-year-old designer who immigrated from Japan to Paris by boat in 1964 to pursue his dreams in fashion. Just six years after his arrival in Paris, Takada founded Kenzo, in 1970. “Since joining Kenzo in 2011, we have sought to honor the house’s legacy by channeling its original spirit, colors, and language and Kenzo Takada’s boundless energy,” said Lim and Leon. Of course, by treating guests to Syrian food and paying tribute to Takada’s own immigration story, there was also an underlying political statement. The masks, which were also from the archive, also happened to be intended as a reference to the Russian feminist protest punk rock group Pussy Riot, who bought their masks from a Russian dollar store when they formed their infamous group known for protesting Putin. The band also happened to be founded in 2011, the same year as the Arab Spring.

And, if you for a second thought Lim and Leon couldn’t get any cooler, they brought in reclusive icon Lauryn Hill to perform hits “Killing Me Softly,” “Everything is Everything,” and “Doo Wop (That Thing).” This was the show and the moment of Paris Fashion Week thus far.

Video! The Daily at Coterie, Day 3