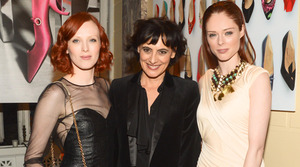 (NEW YORK) Viva Vivier! Luxe accessories label Roger Vivier threw a bash at the posh French Embassy on the UES last eve to fête their new eponymous brand bible, Roger Vivier, published by Rizzoli. The chic affair was hosted by the brand’s designer, Bruno Frisoni, and brand ambassador, Ines de la Fressange. The coffee table tome will tell the story of the brand’s storied history as a Parisian luxury maison. Who better to herald in a new chapter for the iconic brand than iconic model and singer Karen Elson?

The flame-haired Elson wore a black, sheer-sleeved minidress from Saint Laurent that showed off her alabaster, mile-long legs. Elson’s set list included: “Birds They Circle,” “Truth is in the Dirt,” “Play with Fire,” “Hell and High Water,” “Season of the Witch,” and “The Ghost Who Walks” (the latter of which is the title of her new album). As for her musical influences? “Obviously there’s Emmylou Harris, Joan Baez, Hope Sandoval, Patti Smith, PJ Harvey, Neko Case; all of those women I love more than anything,” said Elson. But her favorite up-and-coming artist is ex-husband Jack White‘s fiddle player. “There’s this wonderful young lady called Lily Mae Rische and she plays with Jack in his band,” said Elson. “I feel like she’s the second coming of the folk goddess. She’s amazing!”

And while Elson is certainly no stranger to performing on any kind of stage (runway, concert, or theatrical, a la The Citizens Band), she still gets a touch of stage fright. Which stage induces the most fear? “Nothing scares me like walking down the runway. It’s terrifying. It’s the scariest thing,” said the longtime mod. “But I’m scared of singing, too, especially in front of this crowd.” Could’ve fooled us. If anything, Elson looked perfectly charismatic and at ease on the stage and sounded as great as she looked. As for the crowd? Coco Rocha was front and center and even Gilles Bensimon fought his way to the front to snap away with his personal camera.
PAIGE REDDINGER