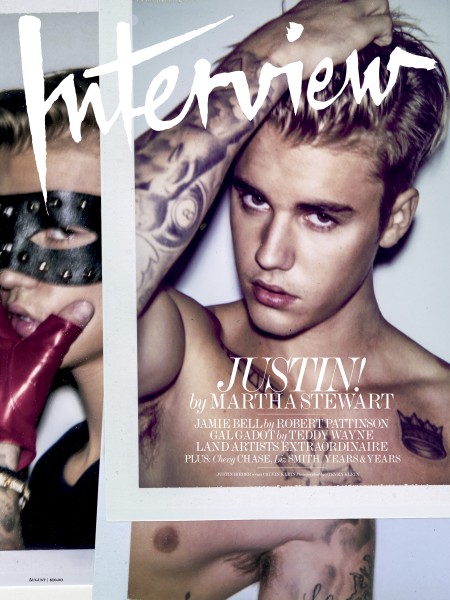 Interview Magazine just unveiled its August cover star: Justin Bieber. The “Prince of Pop” was shot by Steven Klein, who captured the star in a raw, provocative, shirtless (!) and occasionally clown-like (we’re not kidding) form. As per usual for the glossy, another celeb conducted the interview and it’s…Martha Stewart. The 21-year-old dished to her on what he focuses on most, including cars, stocks, skating, finding the best sound, and making the “best album possible.” Plus, did you know that he graduated high school with a 4.0 G.P.A? Here are some of our favorite quotes from the dishy Q&A.

On his Met Ball date: “I didn’t have a date. But I got to talk to Anna Wintour for quite a few minutes. We talked about fashion, and I thanked her for inviting me, because you have to be invited to the event. I know they use a pretty small list, so to be in that room with a lot of awesome people…”

On meeting his manager Scooter Braun: “He kind of stalked me, basically. He got in touch with a lot of people in Stratford because he couldn’t get in touch with me. My mom’s last name is Mallette, and my last name is Bieber, so he contacted my great aunt, who I’d never met before. He contacted the school board. After a while, it got kind of creepy to my mom, so she finally gave him a call to tell him to stop calling. She ended up talking to him for about two hours. They kept in touch, and we eventually made a trip out to Atlanta to see what he’s about and to see what kind of connections he could get.”

On his ride: “I’ve got a Ferrari…It’s red. And then I have an Audi R8, which is matte black. I have a Range Rover. I have a Mercedes-Maybach.”

On his investments: “A lot of different tech investments, but not a lot I can speak on because we want to kind of keep that private….Just the fact that there’s such a big return. We’ve got someone who’s very smart in that world who helps us figure out what’s going to blow up and … I don’t know, I just like tech.”

On his upcoming album: “It’s just very personal. People will be able to really get in to where my heart is. It’s about my journey in life—stuff that I’ve been through. Maybe I can teach a lesson, certain things that are inspiring.”

On his love today: “My love? My love today is my little brother. He’s staying with me for the next week. So he’s my love right now. No girlfriend at the moment, no. I’m single.”