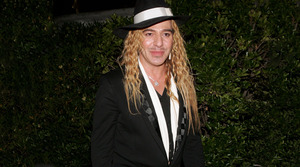 (NEW YORK) Another John Galliano interview might be in the works. The man hasn’t spoken to the press since an apologetic announcement after his famous incident, but Galliano still continues to stir up the headlines. Fascination with Galliano’s career status has been stirred up by his stint with Oscar de la Renta, that class at Parson’s (which was subsequently canceled), and a much-anticipated upcoming Vanity Fair interview, the latter of which was recently conducted by Ingrid Sischy, according to WWD, although the publication date remains a mystery.

What’s the latest? Galliano is apparently in talks to make a TV appearance on Charlie Rose‘s public television program, though his publicist denied the rumor. Rose has interviewed many fashion insiders over the years, from Carolina Herrera and Ralph Lauren to editors like Anna Wintour and Robbie Myers. A television appearance would no doubt be a tougher forum for the designer to discuss his past demons. If there is indeed a Rose interview in the works, what will the designer have to say about his very public overnight downfall and slow return to the fashion biz?