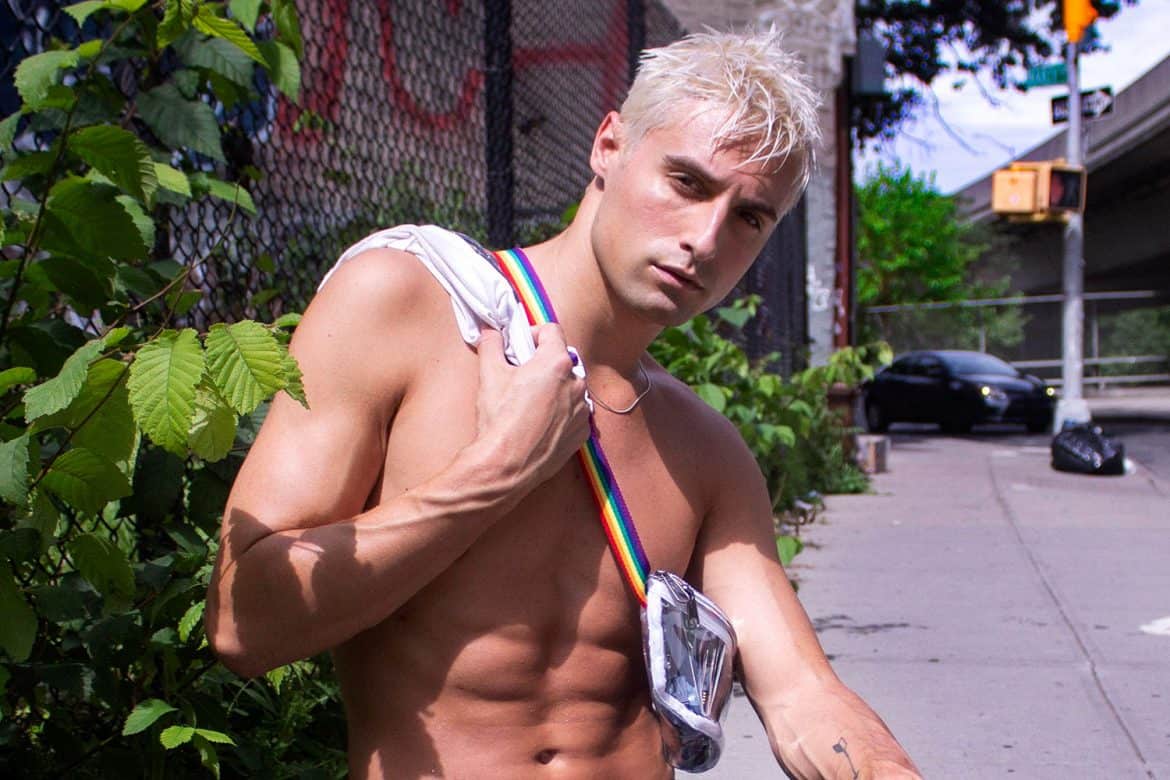 Model and influencer Jimmy Pezzino is helping DKNY and The Daily celebrate Pride this Sunday onboard a double decker bus during New York’s World Pride parade. The Daily caught up with Pezzino to find out more about what Pride means to him and what sort of work still lays ahead for the LGBTQ+ community.

What does Pride mean to you?
Pride means celebrating the long, hard journey of the members of the gay community that came before me. It is because of them that I am able to live and celebrate Pride now. Pride is everything to me.

How do you identify?
I identify as a gay man.

What does that mean to you?
It’s different for everyone and that’s why I think finding your own identity is so important. Even if it takes time. I could walk out of my apartment in thigh-high boots and makeup one day and the next I could be in jeans and a t-shirt. I love to
bend norms and challenge stereotypes. It’s crazy the types of conversations you can start just by putting on a pair of heels.

How has your idea of gender/sexuality changed in recent years?
When I was 21, I figured you were either gay or straight. I didn’t know there were all these other identities. I mean, my eyes have been opened up to so much in the last year. I respect anyone’s choice to be whatever they want to be when they want to be it. At times, it can be confusing, but I honestly love to learn about each person’s story and how they identify.

Tell us about your own background. Where did you grow up?
I’m from Buffalo, NY, where it snows almost 365 days a year. Kidding. I grew up in a pretty open family. My entire life revolved around gymnastics, so I didn’t have much of a social life outside of that.

#tb to my @scmensgymnastics days and boy do I miss it! I really need to get back into it! Who wants to see more? #gymnastics #gymnast #takemeback 🐾🔻

As a kid, I grew up with your typical bullies in school. I was the “faggot” or “gay boy” in school and, at the time, I didn’t know I was gay. I denied it my entire childhood and teenage years. I honestly didn’t know I was gay until I was about 22 years old. My mom would ask me all the time if I was gay and I would just be like, “No, mom, I’m not gay. If I was gay, I would tell you.” We have that type of relationship where I would tell her everything. I think as a family — mom, dad, brother, and sister — we are closer than ever now!

When did you come out?
I was 23. Close friends knew, but I was terrified to tell my family. I told my mom first because I met my first boyfriend and was super excited about it. She was the most supportive I could ever ask for. My brother and sister were next. My brother at first said, “Well, I don’t really understand it, but you are my brother and I love and support you no matter who you choose to love.” He is the best brother a guy could ask for. My sister was super young, so all her friends in school were coming out like it was nothing. She didn’t even hesitate to be supportive.

And your dad?
I was so scared to tell my dad. I don’t know what it is about dads but I had the hardest time. I told him I was seeing someone
and that it was a guy. He responded with nothing but support and love. I guess I consider myself lucky because not everyone has this coming out experience.

How did you feel after you finally told everyone?
The moment I came out, it felt like a weight had been lifted off my shoulders and I could finally breathe! 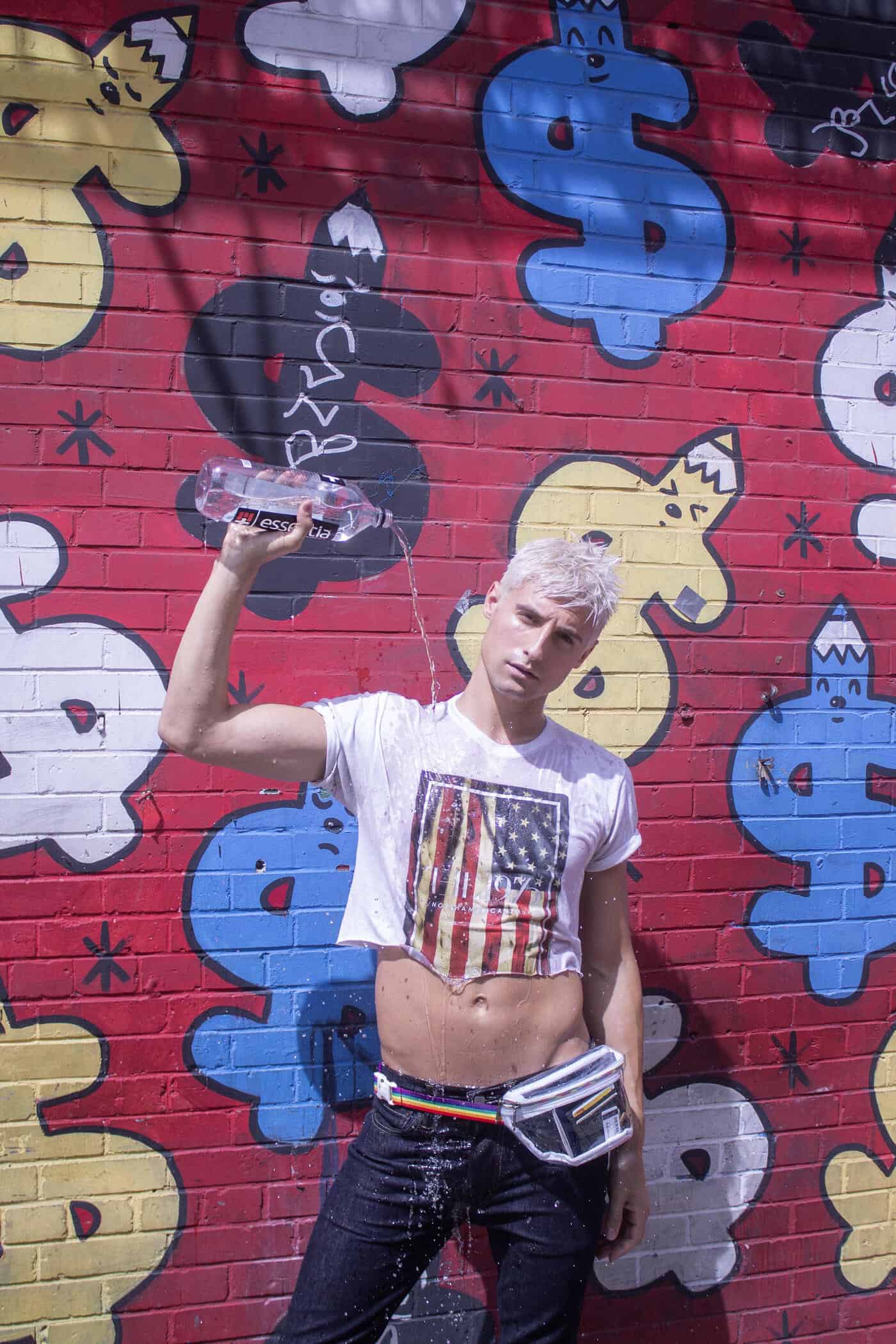 There was a time, though, where I hated who I became after a horribly toxic, cheating, and manipulative relationship. I basically came out of the closet and got a boyfriend within two months. I was told many lies about what the gay community is like and what constitutes “normal” behavior.

There was a time I felt horrible about who I had become and I for sure lost myself. Finding myself and my identity in the gay community again was difficult because who could I really trust? It was hard and I’m still working on it but I can honestly say I’m the happiest I’ve ever been!

People outside the community often think that coming out is the last step, when, really, it’s just one of the first. Sometimes coming out isn’t even the hardest part, it’s learning to navigate this new world and figure out who you are in it, which can be a very isolating process, as much as actually being in the closet.
That’s why I try to use my social media platform to help others going through similar situations that they normally wouldn’t speak out about. By speaking my truth through social media, I’ve encouraged others to reach out and
ask for help. That was super-healing to me. I’ve also been working on a book about my experience and the gay community. The truth will set you free.

People think of the fashion world as the ultimate safe space for gay people. Was that your own experience?
In fashion and modeling you are told to act a certain way to come across as “straight” most of the time. That was hard for me because after I came out I didn’t want to hide who I was just to book the job. They wanted to cast the guys who acted or looked more straight because that sells more than the gay guy in the campaign. 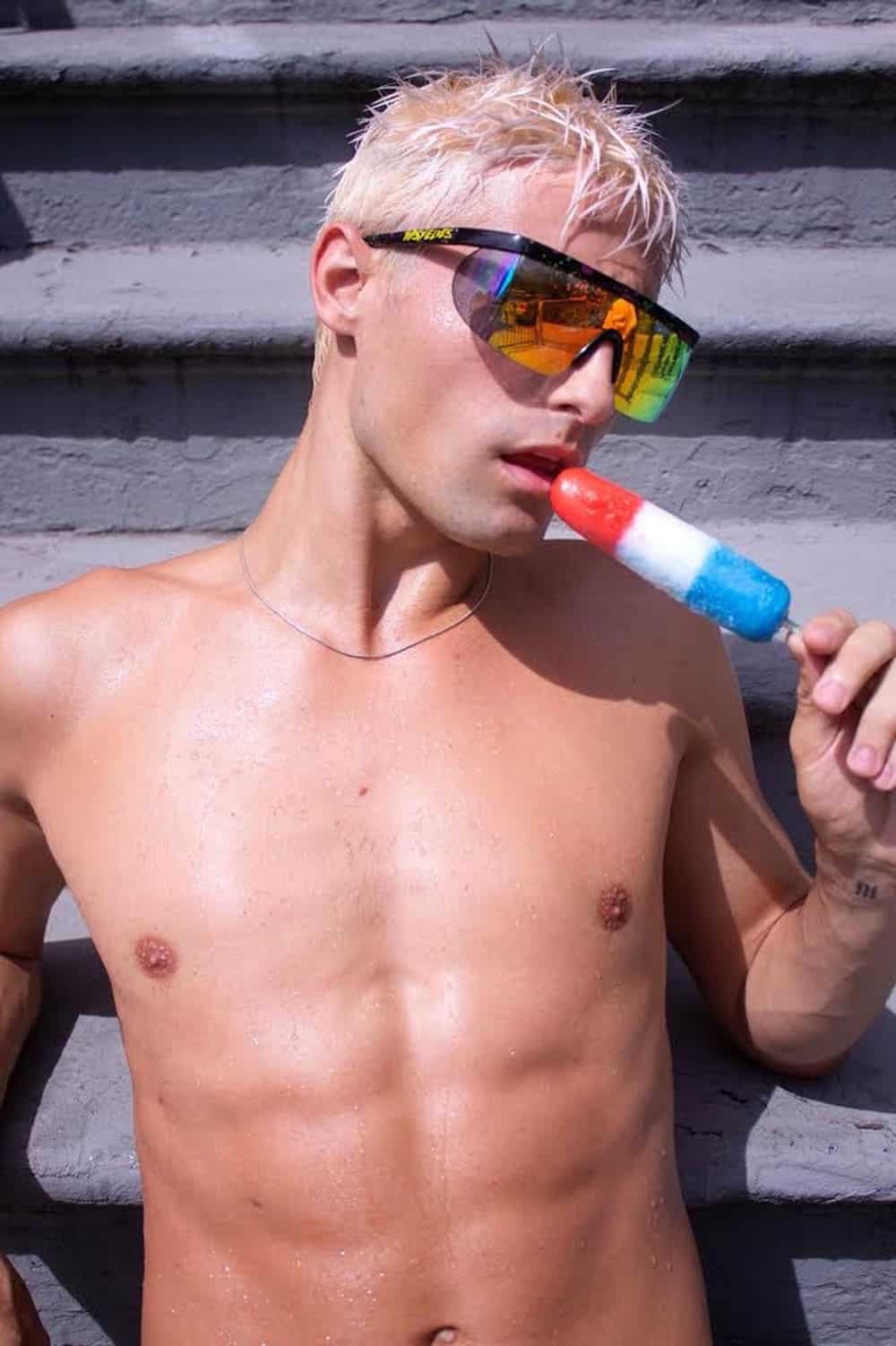 Yeah, there is a lot of internalized homophobia within the industry. Especially in menswear.
I think the fashion world has changed in the last few years with acceptance and LGBTQ+ awareness. I use my sexuality and personality to my advantage now on jobs and in castings. People will love me for who I truly am and if they don’t, that’s not the job for me.

A record number of brands are participating in Pride month this year, but there is also a growing portion of the community that feels Pride has been overly commercialized. What do you think?
I do think the commercialization of Gay Pride has become extreme, but I don’t think that is a bad thing. Brands like Calvin Klein and Ralph Lauren are including the queer community in their designs, which I think it’s amazing. What I think can change is the way they cast their models. Like I said earlier, the straight pretty boy is selling you their new Pride collection just fine, but imagine using an actual gay model or influencer with a real story behind them! I think some brands have to start getting more real LGBTQ+ representatives.

What is the responsibility of the gay rights movement in a post-marriage-equality world? What’s next?
I think it’s important for the younger generation to continue the fight for gay rights! This fight is not over by any means. In some cases, what we have accomplished is already being taken away! We can’t let that happen. The fight must go on. We must stay loud and proud, now more than ever. Especially with the trash we have in White House, currently. I think
what’s next is to get the younger community to understand that voting is so important for the future of this country. If you are gay and want to marry the man or women of your dreams, you have to vote!

What do you say to people who think that homophobia is no longer an issue?
I say they are crazy! Haha. I’m kidding. But homophobia is still very much alive. During Pride month this year, four transgender women have been killed and not enough people are talking about that. We need to continue to speak out and create a safe space for our community. I think it’s disgusting that America is still in this homophobic phase and people need to get educated about it.

When was the last time you felt you were discriminated against for your sexuality?
During NYFW, in February of this year, on the subway. My friend and I were in a subway cart with a violent man, possibly homeless. We felt unsafe, so we crossed from one cart to the next. Two policemen happened to be in the next cart and saw us crossing. They didn’t say anything to us until about five stops later, when they flagged us to get off the train. We thought they were trying to save us from this aggressive man, but they ended up giving us a ticket for crossing between carts.

I remember seeing you on the train right after that happened, you were wearing a mesh shirt, an orange coat, black patent leather pants, and high heel boots.
In my opinion, this was not a safety issue, it was the sheer fact that we look so fabulous in our NYFW looks and we came across as super gay, so they decided to write us a ticket. I was so confused and angry. They could have easily let it slide because it was for our own safety, but since we looked gay they gave us a ticket.

Did you hear about the straight pride march in Boston? Thoughts?
Yes, I heard about the straight pride march in Boston. I have zero tolerance for people like that. Straight people do not have to fight for equality like the gay or trans community has to. What has the straight community done to deserve a Pride parade? This is homophobia at it’s finest and we have to not pay attention to people like this, because they are only looking for attention.

What do you do when you encounter an ignorant straight person?
I enjoy educating them with the truth about being gay. Maybe it’s a generational thing. I find that older people say more things that annoy me or have questions that bug me. I don’t find that much with my generation. I also live in New
York, so it could be different for someone who is 28, gay, and living in Mississippi. Lol. Not that I have anything against Mississippi!

What do you hope the world looks like five years from now?
I hope that we can live in a world that’s full of rainbows and smiles….. that was my Mean Girls quote of the day! But really, I hope that one day we can all live in a world that is gender positive and LGBTQ+ supportive and where we are able to live freely together without hate and crime against our community. It’s possible, but we have to continue to educate the world about ourselves and fight for our rights as humans!

Janelle Monáe on Why Everyone Needs to Attend a Pride Parade

The Best Pride Initiatives And Collections To...