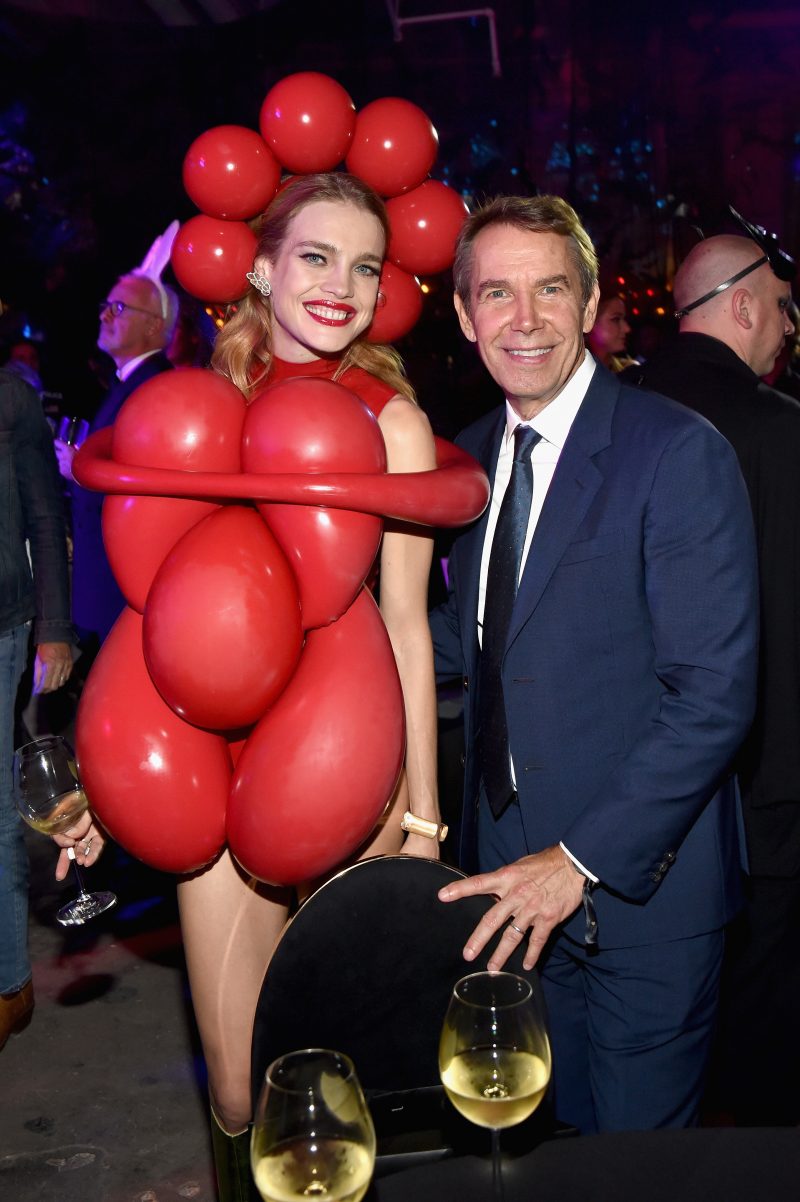 Designers, celebrities, supermodels, and industry titans turned out for Natalia Vodianova‘s epic Fabulous Fund Fair over the weekend, which hands down was the most over-the-top Halloween party of the year—and it’s not even officially Halloween yet! The event raises money for Vodianova’s charity, the Naked Heart Foundation in conjunction with amfAR, to raise money for children with disabilities and special needs. To celebrate, the party took over the Skylight Clarkson North event space and transformed it into a haunted carnival, art directed by Jeff Koons, leading to an uber-chic party that was beyond fabulous on every level. Vodianova mentioned to us last week that she was nervous that her costume wasn’t going to fit, but it did, and it was impeccable—she came as a replica of Koons’ Venus balloon sculpture, leading to a flash-frenzy among shutterbugs. The mod later changed into a silver sequined Paco Rabanne jumpsuit.

Guests got to try their hand at several designer-fueled interactive games—with Koons coins, of course—courtesy of brands like Sergio Rossi, Chopard, Givenchy, Moncler, Net-a-Porter, Stella McCartney, and Louis Vuitton, who sponsored the bumper cars—even Vodianova drove around in her balloon ensemble. Some of the most jaw-dropping prizes? Sergio Rossi shoes (the newest styles of flats and pumps), Moncler jackets, and handbags from the Louis Vuitton x Jeff Koons collaboration. Charli XCX and Nas performed some of their biggest hits, with attendees like Jenna Lyons dancing to the performances in a lime green Missy Elliott-inspired costume. Lyons, who actually tried to slide onto the stage when Charli XCX was performing, was a major stand-out of the night, dressed in her inflated ensemble. “I went to the costume place with my son today and it was the only thing we wanted to wear together,” Lyons told The Daily. “We saw these blow-up costumes and I thought, ‘Oh my gosh, I would love for once for someone not to think about my form or my face or my hair or how I look.’ I’m so happy to not have to worry about being attractive! I’m not worried about being fashionable, that’s all I can say. I’m just having a fun time.”

Others who wore their best Halloween costume attire included Karlie Kloss as Marilyn Monroe, Paris Hilton as Princess Jasmine, Devon Windsor as a Playboy bunny, Ellie Goulding as Dolly Parton, as well as some inspired looks from Naomi Campbell, Shanina Shaik, Nicky Hilton, Derek Blasberg, Carolyn Murphy, Constance Jablonski, Maria Borges, Pat McGrath, and more. Some forewent a Halloween costume, including Brooklyn Beckham, Kenneth Cole, Jeff Koons, Haider Ackermann, and Daphne Guinness (who is arguably always in costume), but nevertheless, they still made for a chic and star-studded crowd that made this party a 10. The event raised nearly $2 million in support of the important work of both the Naked Heart Foundation and amfAR.