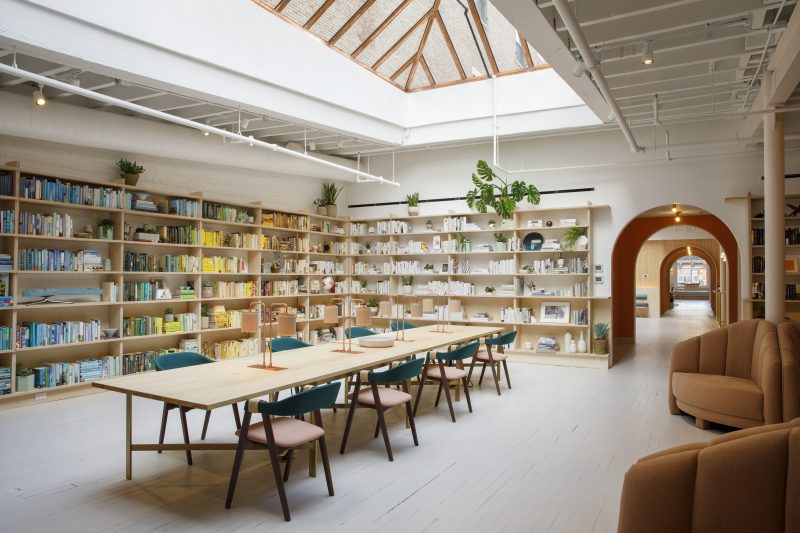 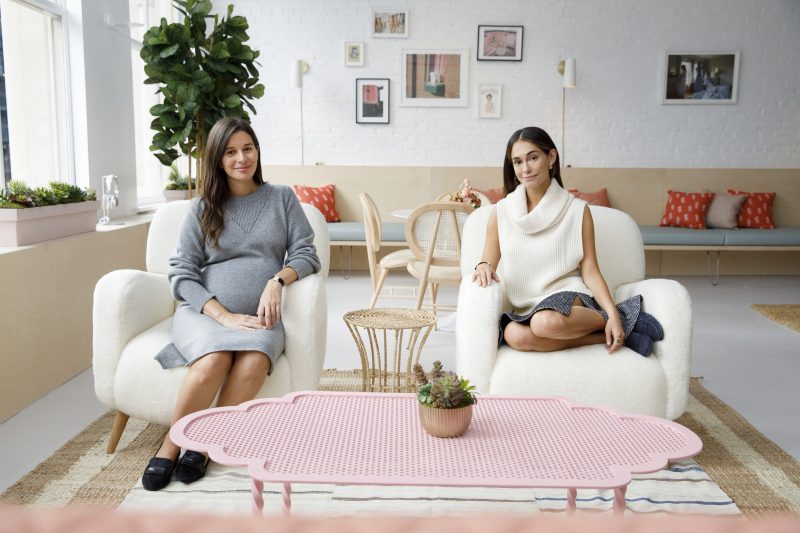 The Wing, the women’s-only work and community space, founded by Audrey Gelman and Lauren Kassan, has opened their second location in New York City today. The first location in the Flatiron on 45 E. 20th Street, which opened almost a year ago, was successful enough that Gelman and Kassan are already well into their expansion plan. Their current membership is at 1,500 between the two space with a waitlist of about 8,000 and counting. The new space in Soho on 25 Mercer Street boasts even more space than the previous location (it’s three times the size of the Flatiron location), as well as new features like more conference room spaces, private offices, and an even larger lending library that is curated by the female-owned Strand bookstore and The Feminist Press. The space also includes many of the features of the Flatiron location including a full-service restaurant serving breakfast, lunch, and drinks as well as a lactation room, a private nap room, private phone booths, showers, lockers, and a beauty room complete with Chanel products. Chanel is said to be an ongoing partner with The Wing, so expect more collaborations coming up this month and beyond.

“For me the most interesting rooms to be in are the ones where everyone does lots of different things,” Gelman told The Daily. “We just accepted a new member who designs the engines of airplanes—she’s an aerospace engineer. We have members that are everything from physicians to therapists to teachers, academics, writers, and also members from fashion and tech and marketing. We even have one member who is getting her PHD in scent. That’s really the most fun part for us—pairing all of these women together. Our community team has breakfast with members every morning by neighborhood and star sign so that members that do many different things and normally wouldn’t get to meet, get introduced and have some sort of affiliation in common on top of just being part of The Wing.”

The Wing also just launched a digital portal where profiles for their members are created as a sort of internal networking and recruiting forum. The Wing has even tapped into its own members to help design some of the space. Artist Kate Hush created the neon sign in the phone booth area and Chiara Dereg created the wallpaper design in the lactation room, to name just a couple. But The Wing has also given birth to business connections that have extended beyond The Wing. “We had two members that met here for the first time and they had both been at white shoe law firms and were both sick of it and they met here and they started their own law firm,” said Gelman. “They can’t hire fast enough because all of the women who have businesses here are hiring them as their counsel.” Another member raised her entire seed round funding through contacts made at The Wing as well as her first few hires.

But The Wing isn’t just a work space of place to make business connections. Gelman says that fast friendships have been formed through The Wing including members who took a girls’ trip to Disney Land. But in a time in which safe female working environments has become such a high-profile issue, The Wing is more needed than ever. “We actually opened about three weeks before the election and, of course, we thought Hillary Clinton was going to be the president, so in conjunction with that we thought that this was the golden age of women in power and we had a really triumphant feeling behind the concept. And then overnight it went to feeling more protective,” said Gelman. “When the election night happened there were over 200 women watching it live together at The Wing. The next month we were all getting on to charter buses at 3:00 A.M. together to go to the Women’s March. People were falling asleep on each others shoulders that were just meeting. It gives me goose bumps to think about it. It’s been such a challenging year, but also in this small microcosm I have seen something that makes me feel of hope. I’ve seen women coming to rely on each other and link arms in solidarity in a way that you didn’t see before. I believe that crisis also breeds innovation. We couldn’t have predicted it, but it reinforces our belief that spaces like this are important to have.”

A third edition of The Wing is slated to open in January in Dumbo and a fourth in Washington D.C. in February.

The Wing Raises $32 Million in Series...