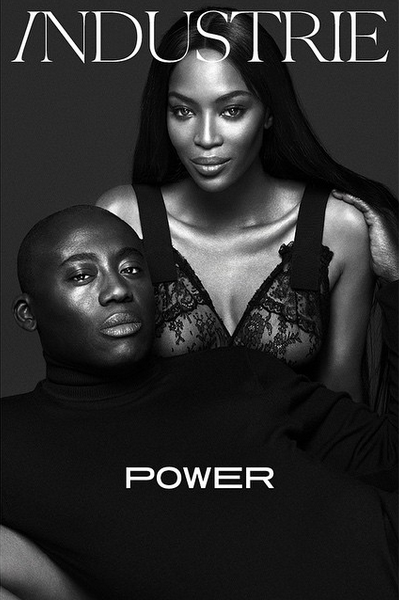 Edward Enninful and Naomi Campbell joined forces to cover Industrie. The supermodel, who has known Enninful for years, joins W‘s fashion and style director for a dramatic B&W portrait image for the pub’s eighth installment, aka the ‘Power Issue,’ shot by Mert Alas and Marcus Piggott.

The mag features a 20-page spread on the beloved ed (no big deal) titled “E As In Edward.” Writer Simon Foxton delves into 25 years of Enninful’s life and career in fashion via an in-depth interview. From his Brit roots and reasons why he chose Instagram over Twitter to his evolving career changes (he dishes on his first advertising company) to his crew in the ’90s, plus more, the piece truly captures the essence of the “stylist at the core.”

“I think stylists have become more recognized. Before, we were kind of the unsung heroes, but over the past 10 years-through designer consultancies and social media-stylists are becoming personalities on their own,” said Enninful. Did we mention Edward modeled, too? “I’m definitely more sympathetic to models. As a model, when you’re on set, you don’t really have a say. I remember the rejections; it was the first time I experienced rejection in my life.” The spread also features quotes from designers, models, makeup artists, and fellow magazine eds on the director’s success. We’ve rounded up our top five faves:

Donatella Versace: ‘Edward is a beautiful and attractive man and he has this sexy, deep look. I am very upset that he is gay-but don’t tell him.’

Pat McGrath: ‘A long time ago, we both went to a hypnotist to quit smoking. When we were there, Edward figured he mgiht as well ‘fix’ other things. He goes ‘Oh, I’m also afraid of dogs. Can you cure that? Months later, he bought his dog, Ru.’

Grace Coddington: ‘Besides his work, there is nobody as loyal and supportive as my friend Edward.’

Kendall Jenner: ‘Walking into a room with him makes you feel really determined and he always manages to put a smile on my face.’