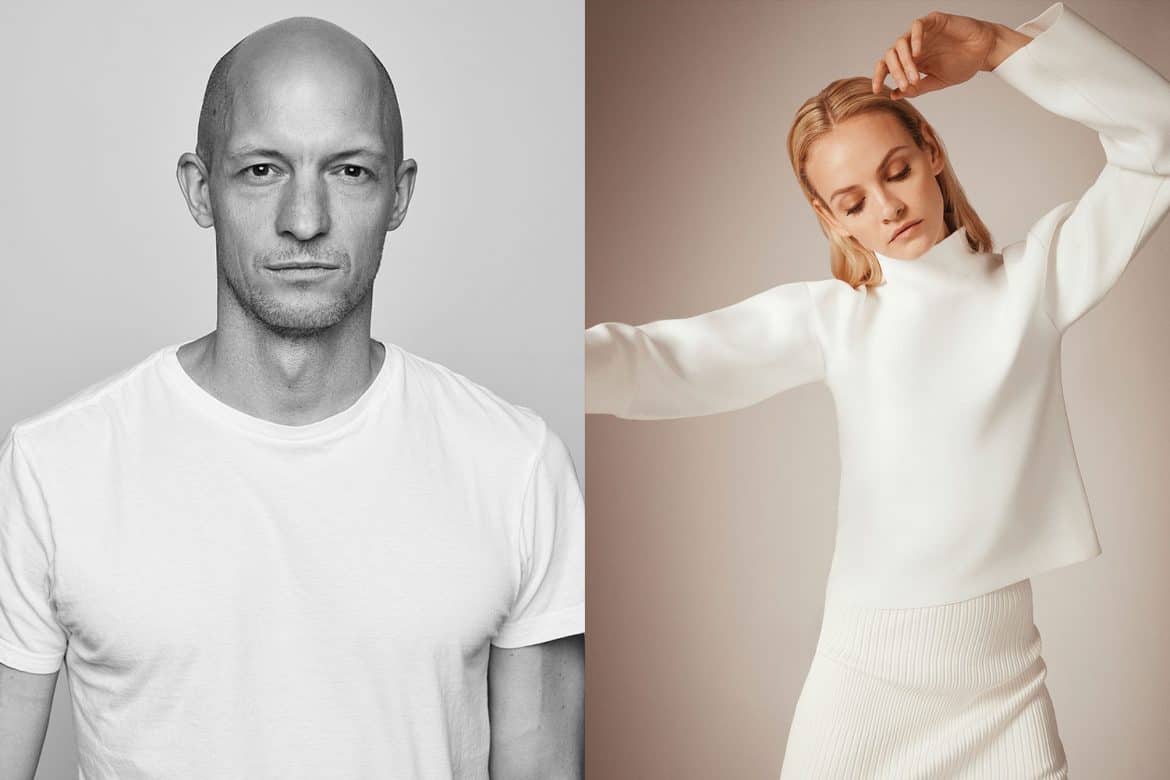 When Hervé Léger brought on Christian Juul Nielsen as their new creative director in 2018, they brought in a shot of energy to a brand waiting for a reboot. An alum of Dior, Nina Ricci, and Oscar de la Renta, Nielsen spent the bulk of his career working with some of the greatest designers of our time and now it’s his turn to show’em what he’s got. 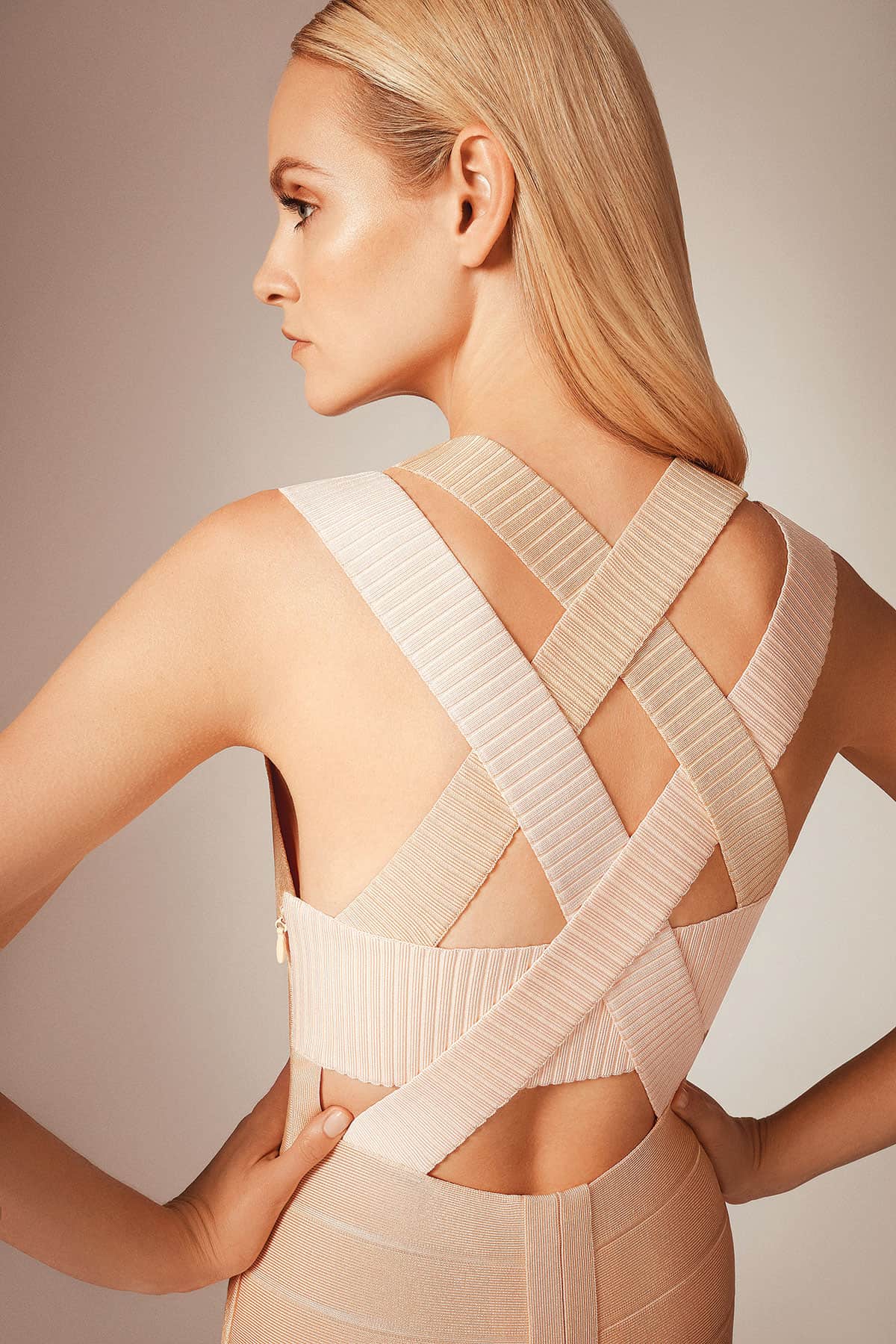 Tell us about your background.
I was born in Copenhagen. I’ve always been creative and wanted to do fashion since an early age. I started in London and moved to Paris quite soon because I got the opportunity to intern with John Galliano. It was supposed to be just a month, but while I was there, the woman I was working with said, “Why don’t you stay until couture and start working on Dior as well?” At such a young age, I was working on couture gowns—it was amazing.

As an intern, how much did you interact with John Galliano?
He was quite involved. He and [head of studio] Steven Robinson knew exactly who was on the Galliano team and the Dior team. I remember sitting in Avenue Montaigne [studio] working on embroidery and Stephen saying, “Chrisitan, come in to see us,” and it would be him and John in one of the salons and he would be like, “I want you to make a kimono bomber jacket.” So I just got bags of feathers and nylon and sat on the balcony, stuffing feathers. Later in my career, I was employed full-time at Dior after I worked at Nina Ricci. At the time John was very present, and he knew what he wanted. He trusted his team. It was very much, “This is your talent; this is what you’re good at. I want to see you grow.” I see in other houses a lot, and hear from friends, that when you micromanage and tell people everything they have to do, you lose the energy. I think that’s a problem in many houses. That’s why John was so good, and why his shows were so amazing. He got people that he trusted, and held onto them. When I was an intern, I came for a month. They believed in [me] and kept me for six months.

How long were you at Dior?
Eight years. I was with John for four years and then he had a year in between and then Raf Simons started. I worked with Raf for three years.

What was it like working with Raf Simons?
He is a fantastic character. I love him. When I work with younger designers now I always say, “Don’t stay at the same place for too long. You don’t want to become part of the wallpaper!” You want to develop and learn at one house, take it to another house, and always keep yourself fresh. At Dior, I felt like I had three different jobs over the years. I worked with Galliano, where I almost only draped. Then, we had an in-between year, which was the more commercial year. With Raf, things changed dramatically. I remember part of the team thought they were getting fired—he came in with such a different energy than John. I’ve always worked a lot on haute couture at Dior, so my argument was, “I don’t think so. He doesn’t have couture people on his team.” So when Raf started, there was a bit of fear. I literally went to his office, knocked on the door, and said, “Raf, couture is two months away, I think we should get started.” 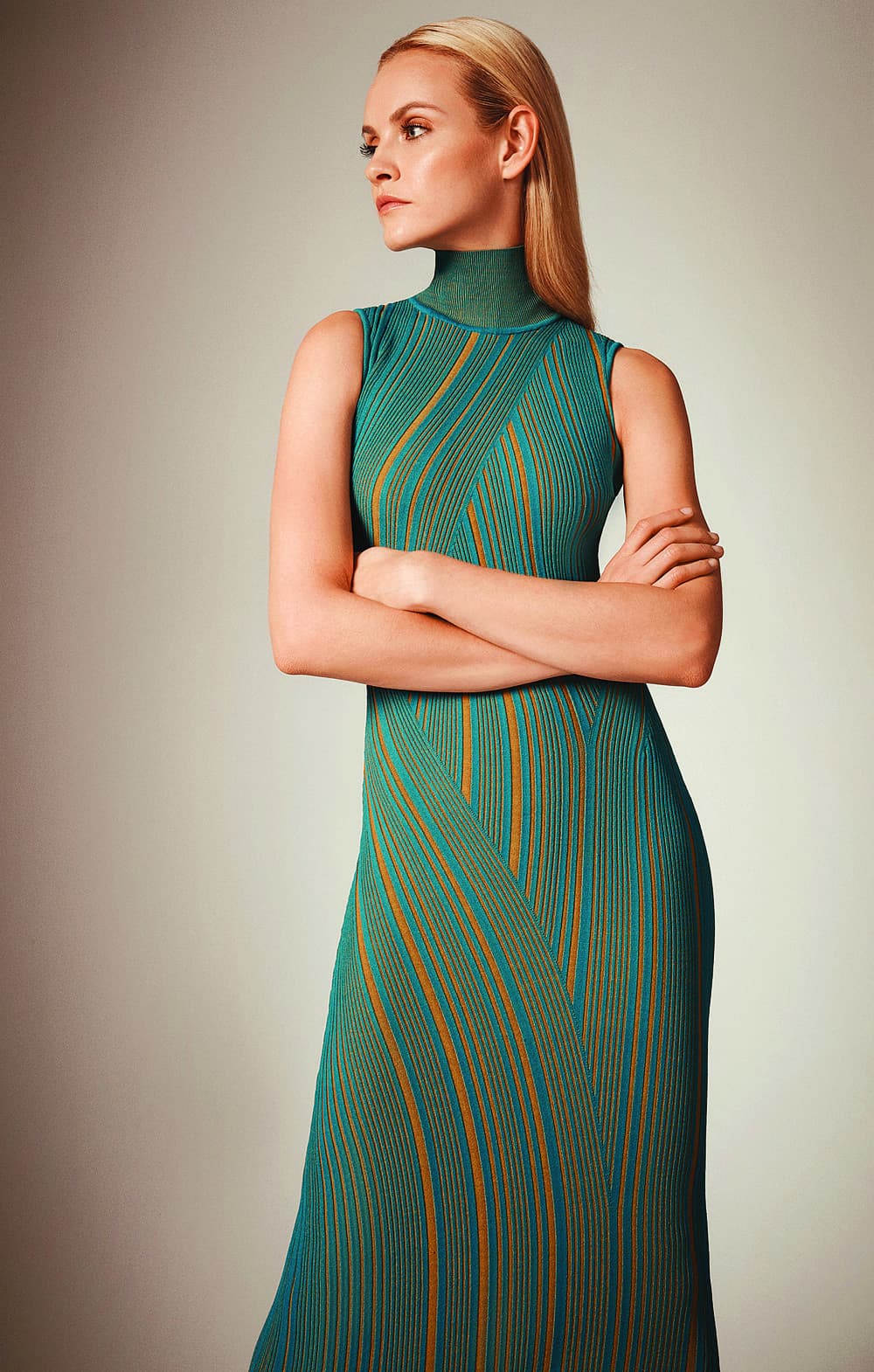 How did he respond?
He was like, “I don’t want to push it; you guys have Resort to do.” I was like, “No, Resort is launched, we need to get on with couture. It’s a different build-up.” I was very direct with Raf. I didn’t think he was going to fire us. I’ve learned in my career that you need to show what you can do, and if you’re good at what you do, people hold on to you. That’s technically how it works. If you don’t get along personality-wise, that’s another thing.

Why is he a fantastic character?
Everybody, including me, thought that Raf would be a cold character—a bit harder, more European. But he’s lots of fun. He liked to interact with the team. He was focused on what was young and happening right now. When there was a break, he was funny, joking around with the team, and just having a good time. He wanted his team to be happy.

Where did you go after Dior?
I became the design director for Oscar de la Renta with Peter Copping in New York. I always wanted to move here. I didn’t want to leave Dior, but I felt like I had to see something new. It was a natural move to go to Oscar with Peter. We did it for a year and then I started freelancing, because Peter moved back to Europe. I worked on a couple jobs, then [became creative director for] LAND of Distraction. I was doing both jobs at the same time, between L.A. and New York. Then, Hervé Léger called me to ask if I’d be interested in coming to work for them.

What made you decide to go for it?
I was at a stage in my career where I needed to take the next step. I wanted a house with a legacy or story behind it, which a lot of houses do, but they’re either very big and just focusing on perfumes, or they’re small and struggling. Hervé was a niche brand, which I was really excited about. I saw a lot of opportunities and thought it could actually be really exciting. There were definitely things to be done.

Did you comb through the archives or do other research?
The company had just been bought by ABG [Authentic Brands Group] when I started. I didn’t know where things were, so I ran to different libraries trying to find images. Suddenly, we found boxes full of Hervé ’90s archives. I feel like Hervé had two big movements, in the ’90s and the 2000s, and I focus a lot on the ’90s vibe — the supermodel energy and the fun. I was even looking on YouTube at the girls talking about the collection and how excited they were about doing the show. There’s a video with Linda Evangelista saying, “I do one show a year for free and this year it’s Hervé, because he’s a great artist” — that obviously meant she liked the clothes. There’s another one of Karen Mulder talking about how she loves putting on the brand’s dresses, because they just make her look good. That whole energy is very much about real girls. Whoever wants to wear Hervé, wants to look great and just have a good time.

How are you retooling the brand?
I’m really excited to see how we can make Hervé Léger more than just bandage dresses. What does it look like to wear Hervé to the office? How can we make it more of a lifestyle brand? I’ve updated techniques, yarns, and effects, which are more obvious things to do, but daywear is a big challenge that I enjoy and am working hard on. Eveningwear is easier, because there’s a strong identity. We’re picking up a lot of new buyers recently, which is great. 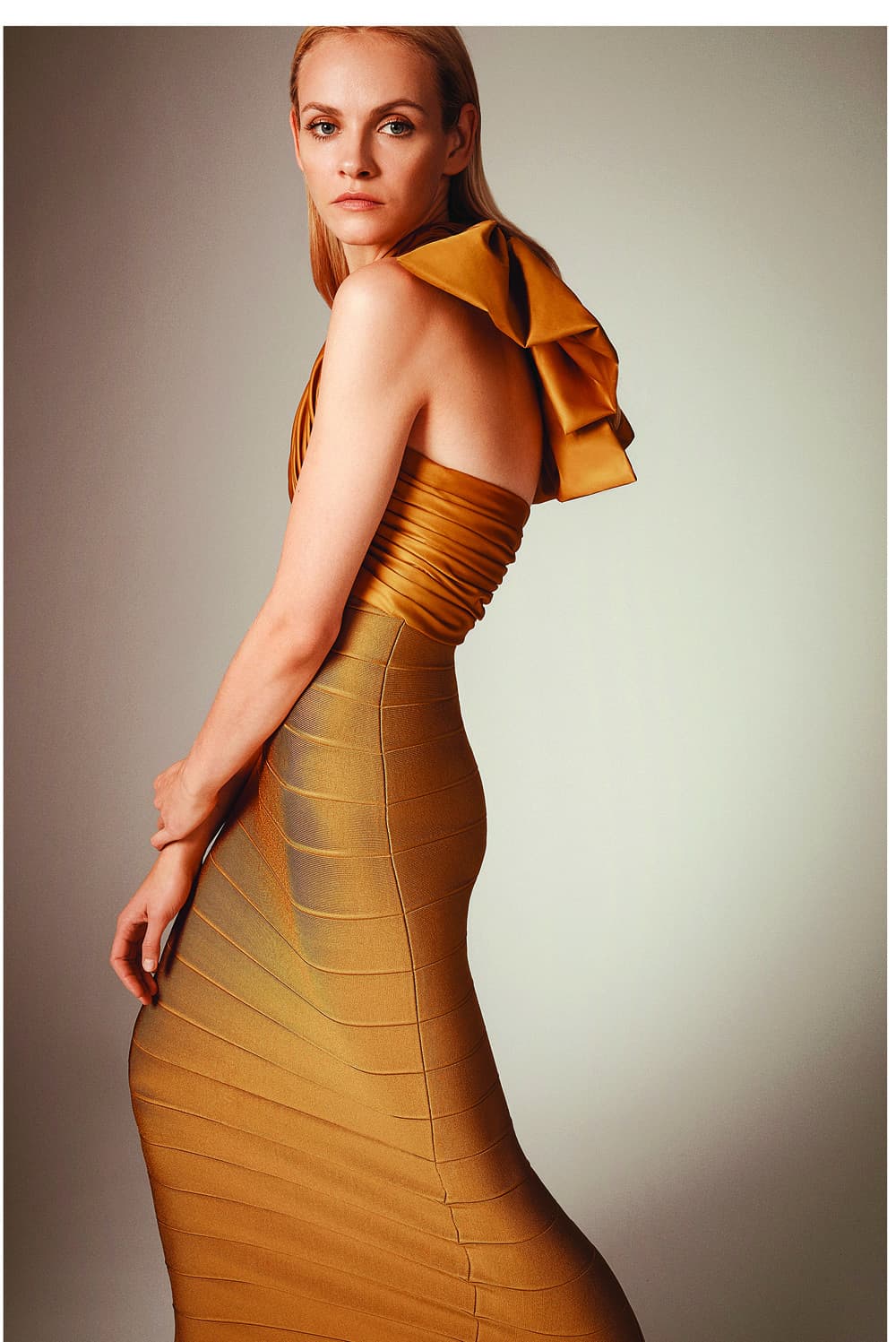 You’re not doing a runway show this season. Do you want to do that eventually?
We talked a lot about it. At some stage, it’d be relevant to do some kind of show. I think the dresses look so much better when they’re worn, because they’re all knitted. Also, we need to look at what’s going on in the industry right now, and how relevant classic runway shows are. Is it maybe more relevant to do something else, where the clothes are moving, but not necessarily walking up and down?

You also have your own brand, Aknvas.
In a way, Hervé is my party girl, and Aknvas is my work girl. Aknvas is based on the girls I grew up with in my adult and professional life. Working for LVMH in Europe for years, I saw a lot of girls grow their careers and get responsibilities where you can’t just wear whatever. You need to look proper to work, but you need to show that you’re creative. Aknvas is really for a modern girl in 2020 and how she dresses for work, but also for evenings. It will be out in February or March on our website, in speciality stores, and from Rent The Runway.

That’s understandable! How do you differentiate your designs for each brand?
I’m a social person—I’m out a lot—and when I design, I think about the girl I’m designing for. If it’s Aknvas, this girl is going to work, she’s not going to make it home after the office, she’s running straight to a restaurant downtown. The new Hervé girl is a modern woman who wants to look feminine and sexy but doesn’t want to look vulgar. 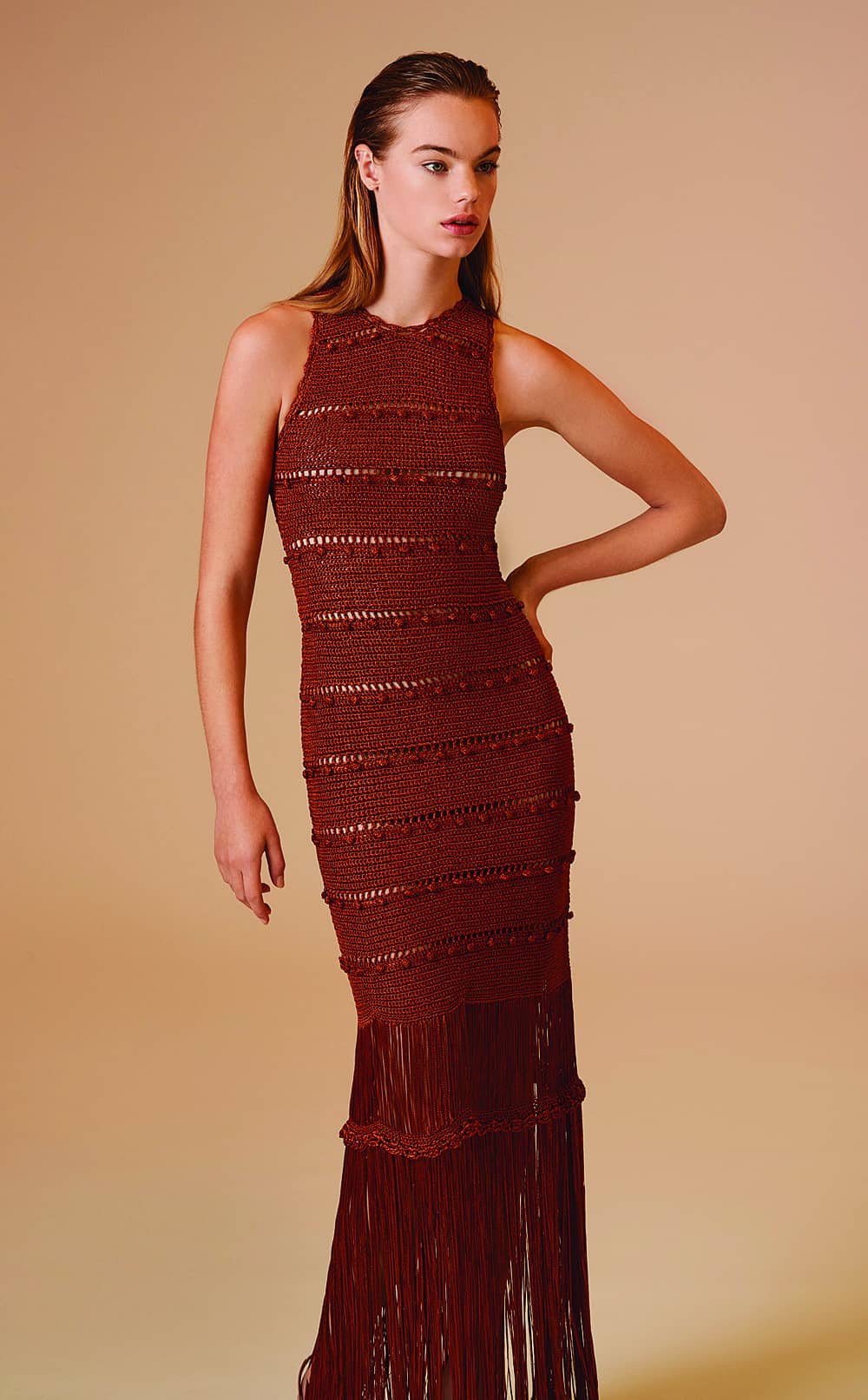 As a social butterfly, where do you go out in New York?
Honestly, something I’ve brought from my European background is going to people’s houses! I like private parties. If I go out to dinner for the scene, I love to go to Indochine for the food. I like to go to Babs, too. And I went to Veronica the other day, which has great food.

Are you loving your current situation?
To be honest, the challenge at the moment is a little bigger than I expected. I try to stay kind and positive, but the way I survive is by having great teams on both [brands]. I always say, “You’re never stronger than your team.”