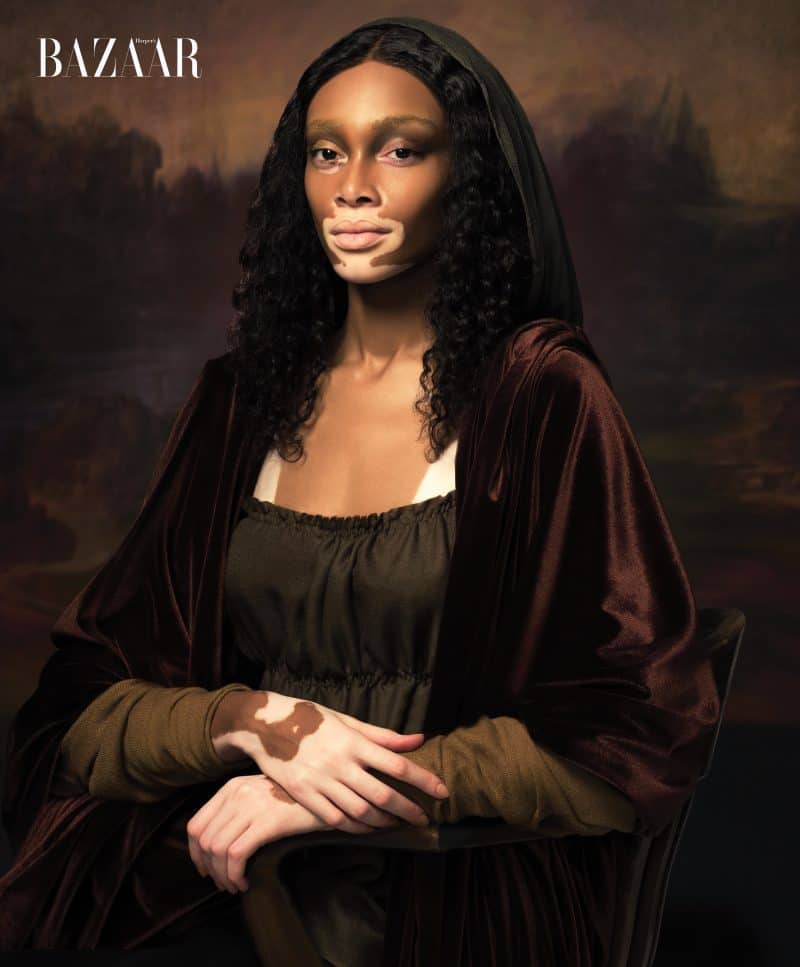 Da Vinci, Vermeer, Sargent! Harper’s Bazaar has replaced the masters’ muses with today’s modern heroines. In the glossy’s November issue, dubbed the “Art of Beauty” and considered a collector’s edition, Winnie Harlow is transformed into Leonardo da Vinci’s Mona Lisa, Halima Aden becomes Johannes Vermeer’s Girl with a Pearl Earring, and Hari Nef transforms into John Singer Sargent’s Madame X. While Nef happens to be a dead ringer for Sargent’s portrait of the young socialite Virginie Amélie Avegno Gautreau, the shoot is meant to reflect the changing standards of beauty in the 21st century. Shot by Pari Dukovic, the images give new meaning to the iconic paintings and incredibly, the clothing is just as modern as the women featured. Harlow is draped in stoles created by Denis Colomb; Aden sports a Bottega Veneta jacket and top, an Ellen Christine Couture turban, and a Cartier pearl earring, and Nef wears an Oscar de la Renta jumpsuit and skirt, with David Webb necklaces worn as straps, and a Lulu Frost hairpin. Kudos to stylist Anna Trevelyan!

Below, Harlow, Aden, and Nef discuss their portraits:

Winnie Harlow: “People come up to me all the time, like, ‘Oh, you know there’s a treatment, right?’ But why would I want to be any other way?”

Halima Aden: “I have both my ears pierced, but I’d never shown them before. It was just for me.”

Hari Nef “You can be in a beautiful dress with your skin exposed and be very sensual, but it doesn’t mean you have to lock eyes with the first Tom, Dick, or Harry you see. Maybe you just want to stare at the wall.”

Check out the full shoot here, which also features Candice Huffine as Sandro Botticelli’s the Birth of Venus and Erika Linder as Egon Schiele’s Self-Portrait With Peacock Waistcoat, or pick up a copy of the issue, which hits newsstands today.

Rhys Ifans Transforms into a Werewolf for Stella McCartney

Angels Among Us! The Angel Ball Draws the Chic Set to Cipriani Wall Street