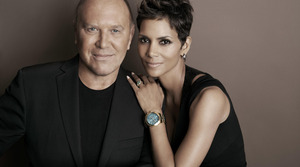 Belle with a cause alert! Michael Kors has tapped Bond babe and mom-to-be, Halle Berry, to help champion his cause to fight world hunger by raising funds for the United Nations World Food Programme. “I could not be more excited about Halle Berry’s decision to join me in fighting hunger,” said Michael Kors in a statement. “She brings talent, energy, generosity, and of course star power to a cause that is extremely important to me.” Berry’s no stranger to lending her face and time to charity with women’s issues being the most near and dear to her heart. She’s supported victims of domestic abuse for the Jenesse Center in Los Angeles and she has raised money for cancer through the Revlon Run/Walk for Women. “Statistics show that women play a crucial role in defeating hunger,” said Berry. “WFP is especially focused on providing assistance to women because, as mothers, teachers, and entrepreneurs, they will improve the future for their families and communities.” Not only has Berry been surprised with impending motherhood for the second time, the actress is also set to start filming the next X-Men film this year, X-Men Days of Future Past sometime this year (hopefully, sooner rather than later, for her sake). With all that’s on her plate, we’re glad to know she can still find time for charity. Bravo, Ms. Berry!