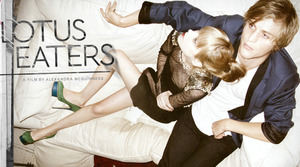 How about a silver screen respite in the form of pampered young Brits indulging in sex, drugs, and other forms of debauchery? Check out Lotus Eaters, an indie flick directed by Alexandra McGuinness that promises scenes of wild parties, haunting tragedy and great fashion. The film, which premiered at the 2011 Tribeca Film Festival and the BFI London Film Festival, follows a group of young friends throughout Europe, as they drink, smoke and fool around, and look chic throughout the whole sordid process. McGuiness, who makes her directorial debut with this film, shed some light on how the gorgeous garb was procured: “We were working with quite a low budget, so we borrowed clothes from designers and fashion houses, which was a way of upping our production value. We also shot in August, which is a dead month for shoots— we had free rein! Lots of people were really generous to us.”

McGuiness, working with costume designer Ruth Higginbotham, was able to acquire threads from a high-low mix including Chanel, John Rocha, Diane von Furstenberg, Agnes B. and shoes from Charlotte Olympia (including a mint-hued, blue-platformed pair on the film’s poster). Also of note: a very memorable feathered creation by Central Saint Martins grad Shao Yen Chen, affectionately known as “the chicken dress.” “The clothes were a big part of it because we were shooting in black and white, so it was a way of creating an architectural aesthetic and texture. We were referencing to a certain degree the way Fellini used costumes in film the way they are used in opera with the same kind of statements,” McGuiness explains.

The film’s leading lady, Alice, is played by fashion vet Antonia Campbell-Hughes. The actress started her own eponymous fashion label in her teens, as well as a diffusion collection for Topshop. “I wanted to be creative and collaborate with people,” said Campbell-Hughes. “I was acting at the same time and I had this idea that I could do both, and that didn’t go down so well. It felt like two very separate worlds. Every time I went into an audition it was like make a decision: are you an actress or a designer?” The screen’s siren call prevailed. “I just stopped [my fashion line], liquidated my business, moved to London and started acting.”

For Benn Northover, who plays Felix in the film, art and photography are the actors pursuits of choice beyond the acting grind. The sometimes-shutterbug has had exhibitions featured in venues such as the Galerie du Jour Agnes B. in Paris and the Fondazione Ragghianti in Lucca, plus a Paris show of his snaps slated for this fall. “Even in my acting, for me it’s the same kind of energy and exploration that makes me want to do photography or filmmaking that makes me do acting,” said Northover.

Intrigued much? New Yorkers can get their hedonistic moviegoing on now, as the flick opened last week, while Angelenos should watch out for Lotus Eaters next week.

Green Is the New Black at ArtCOP21...