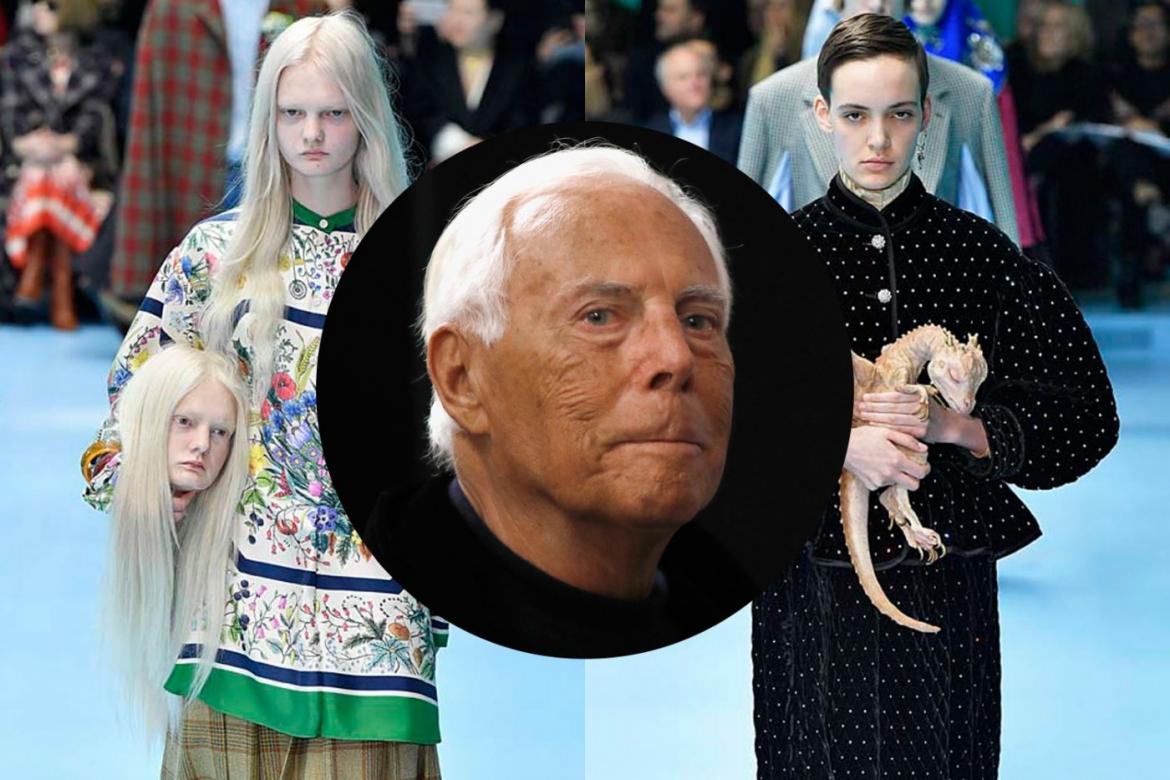 Giorgio Armani Is Not Feeling Gucci (WWD)
Alessandro Michele’s fantastical shows for Gucci have gained him a lot of fans over the last few seasons, but Giorgio Armani is not one of them. When asked about Michele’s use of baby dragons and dismembered heads in his fall fashion show, the notoriously press-shy designer told WWD, “No, I don’t want to be a part of this. Fashion can’t be a means to have the media talk about you. We have to move and excite but without going overboard — it’s too easy. I have never wanted to trick consumers, and what I show on the runway is what customers can find in stores.”

Drones Opened the Dolce & Gabbana Show (The Cut)
Fashion’s latest Instagrammable runway stunt came Saturday at the Dolce & Gabbana show when a fleet of buzzing drones carrying pricey handbags flew down the runway ahead of the brand’s cast of It-Girls-Turned-Models. After all, carrying your own purse is so not chic.

Princess Diana’s Niece Walks for Dolce & Gabbana (ELLE)
Casting millennial influencers and the progenies of Nineties icons has become something of a signature for Dolce & Gabbana. But for fall 2018, they found a cast of Royals fit to wear the Dolce tiara. Lady Kitty Spencer (AKA Princess Diana’s 27-year-old niece) walked for the Italian brand on Saturday along with a other members of British nobility including Lady Violet Manners, Lady Eliza Manners, and Lady Alice Manners — they’re sisters, of course. Lady Kitty Spencer also appears in the brand’s spring 2018 campaign.

Gucci Donates $500,000 to the March For Our Lives rally (WWD)
In a move that surely everyone can get behind, Gucci announced Friday that it will pledge half a million dollars towards the March For Our Lives rally, the gun-control march on Washington planned for later this month. “We stand with March for Our Lives and the fearless students across the country who demand that their lives and safety become a priority,” the Italian fashion house said in a statement to WWD. “We have all been directly or indirectly impacted by these senseless tragedies.”

The Weinstein Company To File For Bankruptcy (The New York Times)
The Weinstein Company announced it will file for bankruptcy imminently, following the collapse of talks with an investor group for the company’s sale. The group originally offered to pay roughly $275 million for the Weinstein Company, in addition to the assumption of $225 million in debt. In a statement late Sunday, The Weinstein Company board, which includes co-founder Bob Weinstein said, “While we recognize that this is an extremely unfortunate outcome for our employees, our creditors and any victims, the board has no choice. Over the coming days, the company will prepare its bankruptcy filing with the goal of achieving maximum value in court.”