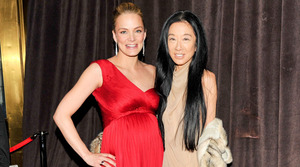 (NEW YORK) Attention, attention! Tomorrow night, the chic set will gather at Cipriani Wall Street for the 2013 Delete Blood Cancer Gala to support the world’s largest non-profit bone marrow donor center. Vera Wang, Derek Lam, Anja Rubik, and Coco Rocha are just a few of the notables expected for a night of dinner, entertainment, and of course, donations. Delete Blood Cancer co-founder, Katharina Harf, checks in with The Daily to give us the low-down. BY RACHEL BERNSTEIN

How did Delete Blood Cancer start?
Delete Blood Cancer started when my family was looking for a donor for my mother. She was diagnosed with acute leukemia and when you have an acute form of leukemia; chemotherapy and radiation alone often don’t work. At the time, there were only 3,000 donors in Germany, so my dad rallied everyone he knew to start a movement. Today we have over 3.5 million donors and 35,000 patients have gotten a second chance at life.

You worked in fashion beforehand, right?
I worked in consulting and then I worked at Hugo Boss and in a management training program at Louis Vuitton. I’ve always been surrounded by fashion, so I thought it was something I’d like to do. Turns out I like to wear fashion, not work in it! So I joined the organization with my dad to make a difference and launch Delete Blood Cancer in the U.S. in 2004. Now we have offices in Poland and the UK.

How were you able to inspire the fashion community to support Delete Blood Cancer?
I’ve grown up around it. My mother was very much into fashion; if we didn’t have a particular brand in Germany, she’d go to Milan with my dad and go shopping. My dad also works with fashion companies at Coty Inc. and through his work I’ve met designers like Derek Lam, Vera Wang, and Calvin Klein. Derek Lam and I have become friends now. From the beginning, he offered to design my dress for the event each year because he thought it was such a great cause.

Who else from the industry has gotten involved?
Vera Wang has been very involved, and we’re honoring her this year. Also, we did an event with Jimmy Choo this past November and they’ve been amazing. The designers from Bally have developed a capsule collection for us. And, Calvin Klein has been supportive in the past.

How has Vera Wang contributed?
She comes every year to the gala and has been very supportive in spreading the word. We approached her about a campaign we wanted to do for a fragrance she created with Leighton Meester called Lovestuck. So we developed a campaign around that and then we asked her to design a t-shirt. We also asked Leighton, who we’re honoring as well, to be in the campaign. It turned into the Share the Love campaign and the ad was featured in over 25 magazines. It was a concept we created with one of our patients, who had received a transplant four years ago from one of our German donors.

What other celebs have pitched in?
Rihanna and Eva Mendes have been very supportive. We haven’t done something specific with Eva but she’s offered to help in any way and she’s come to the gala for about five years. Kylie Minogue had been there as well and Jennifer Lopez has helped us in the past. We’re so lucky that people continue to come; they don’t only come for one year.

OPI’s executive vice president and artistic director Suzi Weiss-Fischmann will also be honored on Wednesday.
Yes, Suzi developed a special line of colors for us. We just recently changed our name to Delete Blood Cancer, so the name of the collection was OPI Loves DKMS. We gave out the nail polishes at the gala one year and then all the magazines jumped on it, including Vogue, Vanity Fair, and Elle. All of the proceeds go to registering donors, and we can clearly state how many lives we’ve saved.

How has the gala grown over the years?
This will be the seventh year and our fundraising has just exploded. The first year we raised $800,000 and then it grew to $1.2 million. This year will definitely be $3.6 million but we could even reach 3.7 or 3.8 million. It’s become one of the largest events in the city.

How did you get Nate Berkus to host the event?
Nate is a friend of the family. He was a great host last year and was happy to do it again this season.

Any special performances this year?
Lady Antebellum is going to be our headliner. Some of the band members have recently been affected by blood cancer. They’re not charging us anything for the performance and are being really fair with the expenses. Jill Scott is also going to sing the song “Home” which Diana Ross sings in the movie The Wiz to a family who has four boys that are all still looking for donors.

To register as a bone marrow donor, visit www.deletebloodcancer.org.