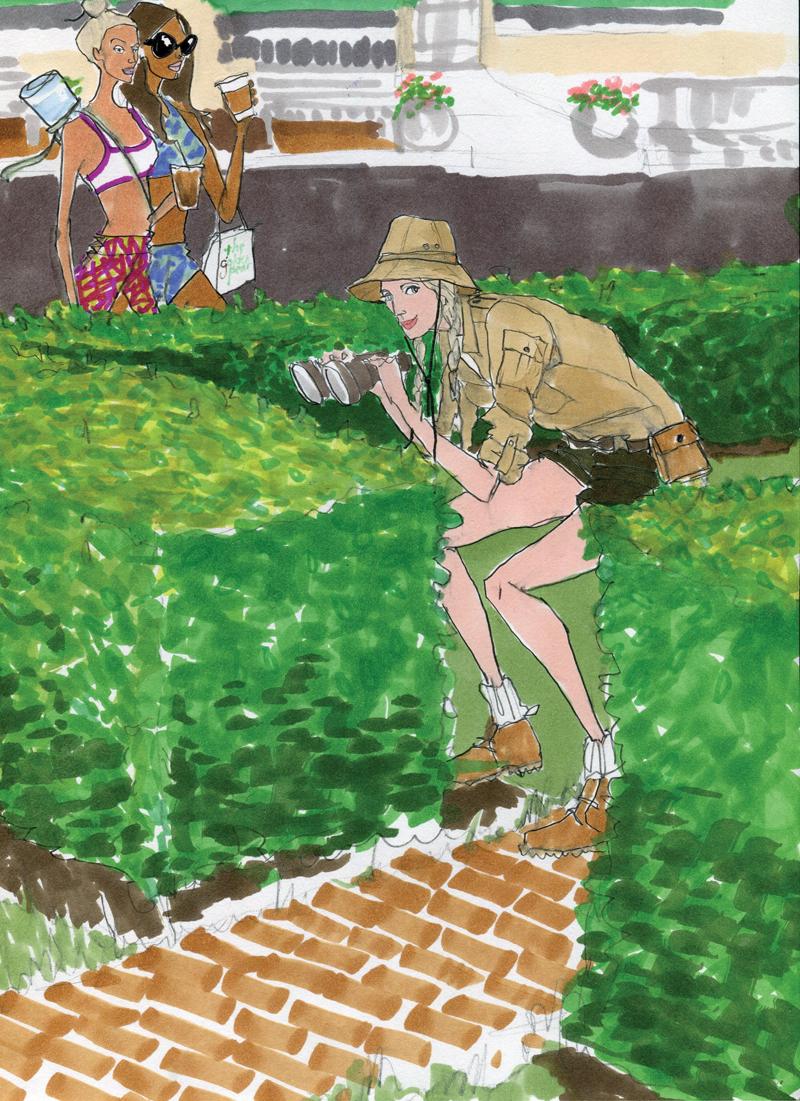 How to make sense of the various breeds marking their territory on the East End? Our fearless Flack breaks it all down!

With summer officially in full swing, you might be questioning how best to navigate the wildlife out East. Each township is its own unique ecosystem, and I’m delighted to be your bona fide tour guide as we venture deep into the heart of the Hamptons jungle. Grab your binoculars!

The Yoga-rific Mom
Identifying Characteristics: The gazelle-like beast is most recognizable by her novelty leggings, her chiseled six-pack, and the gigantic iced coffee that is always in her paw.
Habitat: Mostly East Hampton, although she herds to Water Mill for a “preferred mat” at Tracy Anderson.
Deadliest Predator: The new guy behind the counter at the Golden Pear who accidentally put whole milk in her smoothie. I SAID NO LACTOSE!

The Trustafarian
Identifying Characteristics: His semi-preppy outfit is hastily assembled, but if you look closely it’s all Ralph Lauren Purple Label.
Habitat: The family house on Lily Pond Lane, but he frequently pilots an Escalade to Crow’s Nest.
Mating Call: “I’m having a pool party back at my place, and I have central AC.”

The Power Couple
Identifying Characteristics: She’s a fashion editrix; he’s a hedge-fund guy. You recognize them from the party pages in Vogue. She looks like she stepped out of the pages of the Zimmermann look book and, TBH, you don’t even notice the male counterpart because he’s fielding calls in the Rover as she runs in to grab coffees at Jack’s.
Habitat: Any neighborhood you’ll never be able to afford.
Deadliest Predator: These two sit at the top of the food chain. They’re only brought down by existential crises and extramarital dalliances.

The Eternal Frat Guy
Identifying Characteristics: Rainbow sandals, ancient seersucker, flabby gut.
Habitat: Cruising the strip in Southampton in someone’s father’s Rover, brunching at Le Bilboquet with last night’s conquest, playing flip cup at a rundown property that’s miles from the beach.
Mating Call: “My boys and I are heading to the Sloppy Tuna later. You should cruise by.”

The Best Gay
Identifying Characteristics: An impeccably pressed polo shirt, artfully rolled cuffs, Gucci loafers. His body hair and English garden are equally manicured.
Deadliest Predator: The clumsy waiter who spilled mustard on his white shirt, screaming children, and women over age 50 in halter tops. Honey, it’s not 1988! That’s all the time we have for this particular safari, but please stay tuned for other excursions!

The Daily Wonders: What’s Your Most Embarrassing Splurge?