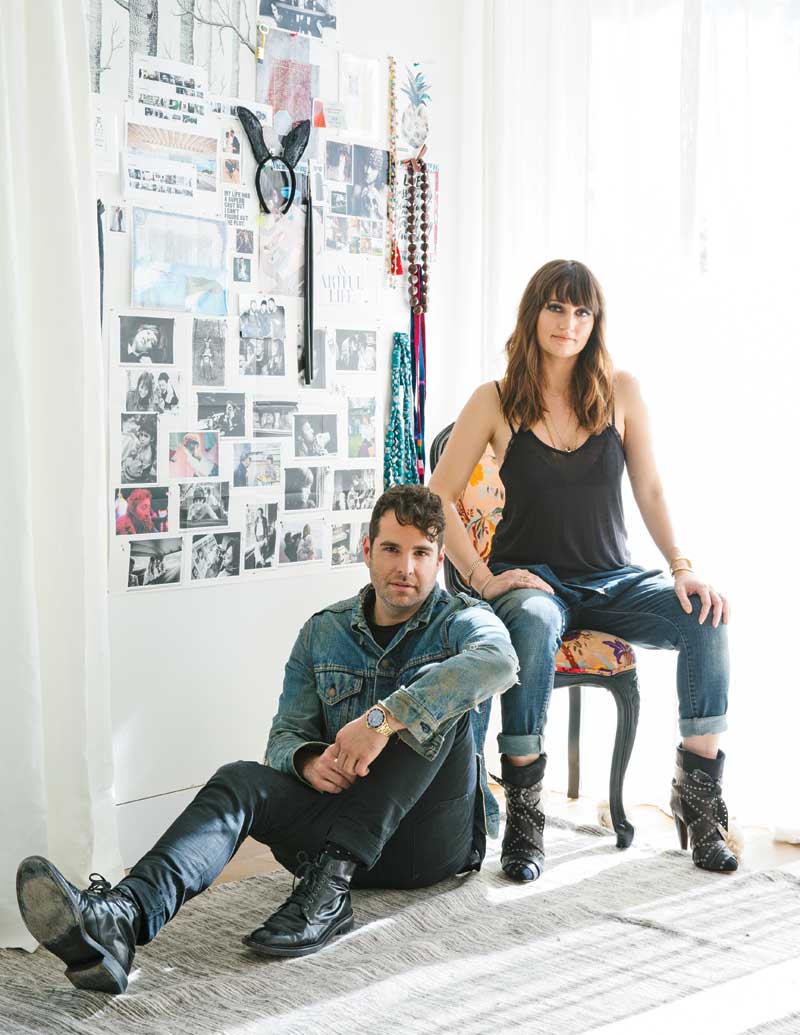 How do Jennifer Lopez and Gwen Stefani dominate the red carpet? Ask their adorable and devoted stylists, Rob Zangardi and Mariel Haenn, who are steadily conquering Hollywood while every designer around the world awaits their call.

How did you meet?
Rob Zangardi: After college, I moved to New York and got a job at MTV in the wardrobe department. I was there for two years and ended up leaving and doing freelance before I went to Carson Daly’s late-night show on NBC, where I was the costume designer. When I left MTV, Mariel took my spot and I went back to visit a good mutual friend of ours, [former correspondent] SuChin Pak. I mentioned that I needed jewelry for a shoot and Mariel said, “Here—take some of this!” We hit it off and became friends.
Mariel Haenn: We bonded over jewelry!

When did the working relationship take off?
Rob: When Mariel quit MTV, Rihanna became her client and I ended up helping. There was one week of craziness with a two-day music video shoot, campaign shoot, photo shoots, and another music video shoot the following weekend. Mariel called me a week prior and said, “I don’t know L.A.—help me!” Our first job together was Rihanna’s “Umbrella” video. Ten years later, we’ve been working together ever since.

What makes you work so well together?
Mariel: I’m from New York and Rob’s from Ohio, but we have a very similar, yet different sensibility. We have similar taste in not only clothes, but also food and pretty much everything else. Rob is a twin, and we always joke that I’m the third sibling who got lost in the mix somewhere. We’re also a guy and a girl, so we offer our clients both perspectives.

Rob, as a twin, is working closely with a partner something you need, or is it just a coincidence that you’re part of a professional pair?
Rob: I never really thought about it, but you’re probably right. Growing up, my brother and I went to private school and wore uniforms, and my whole life, I tried to look different than him, and the only way I could do that was with clothes. My parents have joked, “Mariel is more like you than your brother!”

You work with such a diverse group of talents—Pharrell Williams, Rachel McAdams, Lily Collins… How selective are you with the clients you take on?
Mariel: We’re definitely selective, but we are open to a lot of things. We try to keep a well-rounded roster, because we love diversity and showing different sides of our styling.

What makes a good stylist?
Mariel: You have to be versatile, open to change, and have a good reputation with showrooms and designers. You can’t be pushy or follow trends too closely.
Rob: A lot of our job has to do with personalities, too. We do spend a lot of time with clients. We’re traveling with their families—it’s probably the most intimate job you can have with somebody. You’re getting them dressed!

How closely do you follow the runway shows?
Mariel: With one eye open in the middle of the night, waiting for Vogue Runway to refresh. That’s our go-to and our bible. By the end of the season, I’ve already looked 100 times. I’m dying to see what’s new because those looks are going to be our tools for the next couple of months.

Which designers do you wear?
Mariel: I wear a lot of Alexander Wang T-shirts, and I’m living in jeans right now. When it’s time to get dressed up, it’s usually Saint Laurent.
Rob: My go-to is jeans, too. I tend to love the Saint Laurent jeans. I also wear a lot of sweatshirts, boots, sneakers, and motorcycle jackets, which are also Saint Laurent. A lot of times, Mariel and I show up in the same exact outfit—all black with white sneakers, or all black with brown shoes on, or whatever it is. We both wore all denim the other day, coincidentally.

Do you pay attention to the best-dressed lists afterward?
Rob: Not so much! Most of our clients are confident in what they’re wearing, and a lot of them don’t care. We work with a lot of music clients and some edgier looks in general, so what might be on a weekly’s worst-dressed list can also end up on the best-dressed list in Vogue. It’s always tricky about who to pay attention to, so we don’t follow it.
Mariel: After seeing the client happy, I always like to see the day after what everyone’s saying about it, either on TV, radio, magazine, blogs, or Instagram. It kind of creates this tidal wave reaction. And with social media now, even if we’re not paying attention to it, there’s no way we can ignore comments because they are just coming from left and right. 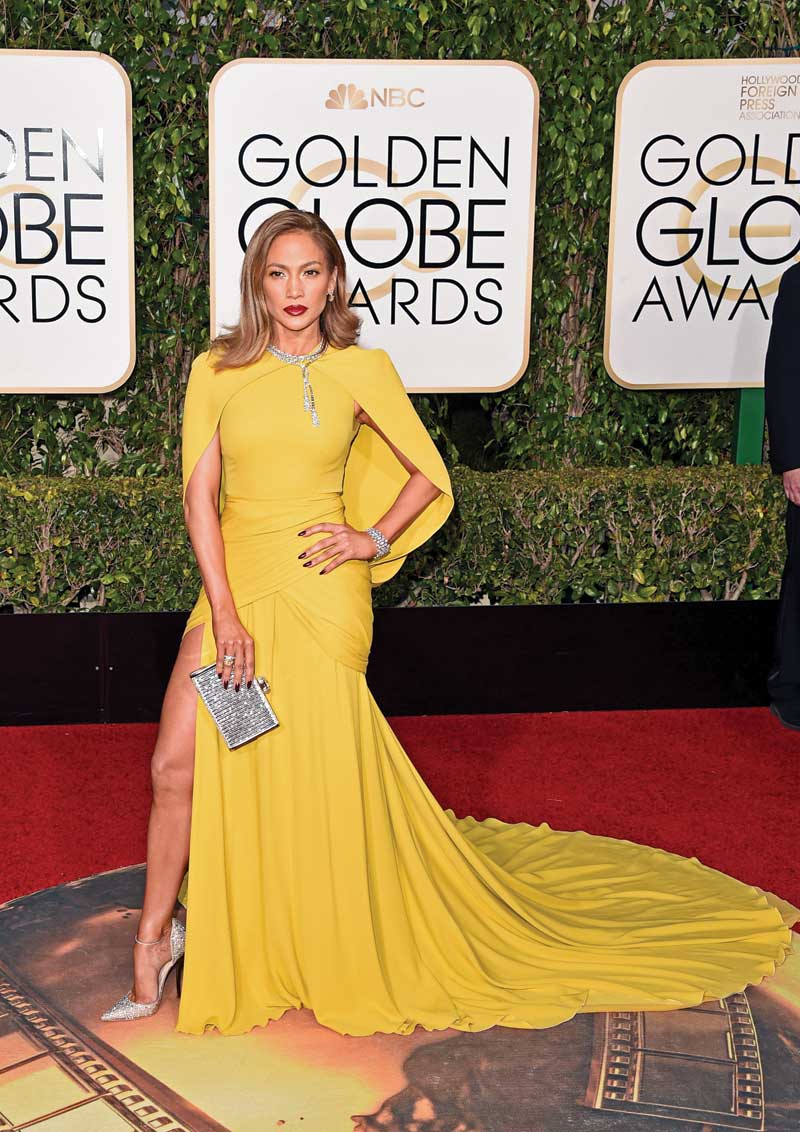 You’ve done some amazing looks with Jennifer Lopez.
Rob: She’s the best; the dream client. Because she does so much, we have the ability to go outside of what people would expect. When she’s J. Lo the musician, we can go a little more edgy and a little bit more funky. When she’s doing movies or TV, we can go a little more old Hollywood. She’s able to pull off all these different looks. She pays attention to the full head-to-toe look.

What’s your relationship like with Gwen Stefani?
Mariel: I’ve been thinking about this a lot lately, reflecting back before I even knew what I wanted to do and graduated high school and college. Jennifer and Gwen were both my go-to girls who sparked my interest in music and fashion in general. All these years later, they’re both dream clients. Between the two of them, as a stylist, what else can you ask for?

What are some of your favorite looks from them recently?
Rob: I loved the Giambattista Valli gown that Jennifer wore to the Golden Globes this year.
Mariel: That’s hard! I still love the J. Lo Gucci dress from the Met Gala from a couple of years ago. Gwen just wore a red dress to the Vanity Fair Oscar party that was different for her.
Rob: Speaking of favorite red dresses, we also love Rachel McAdams in Marchesa at Cannes maybe five or six years ago. We like red dresses!

How do you know when you’ve done a good job?
Mariel: When our clients are happy and we see them beaming. We put them in so many outfits, you can’t see that every time, but you see it when they’re feeling themselves. That makes me feel like we’ve done a good job.

Have you ever won anything before?
Rob: I got “Class Friend” when I was in high school. I don’t know what that means. I think for us, a career highlight was being on the cover of The Hollywood Reporter with Jennifer. This is such an honor as well. We go through our careers standing behind our clients and not expecting praise or acknowledgement.