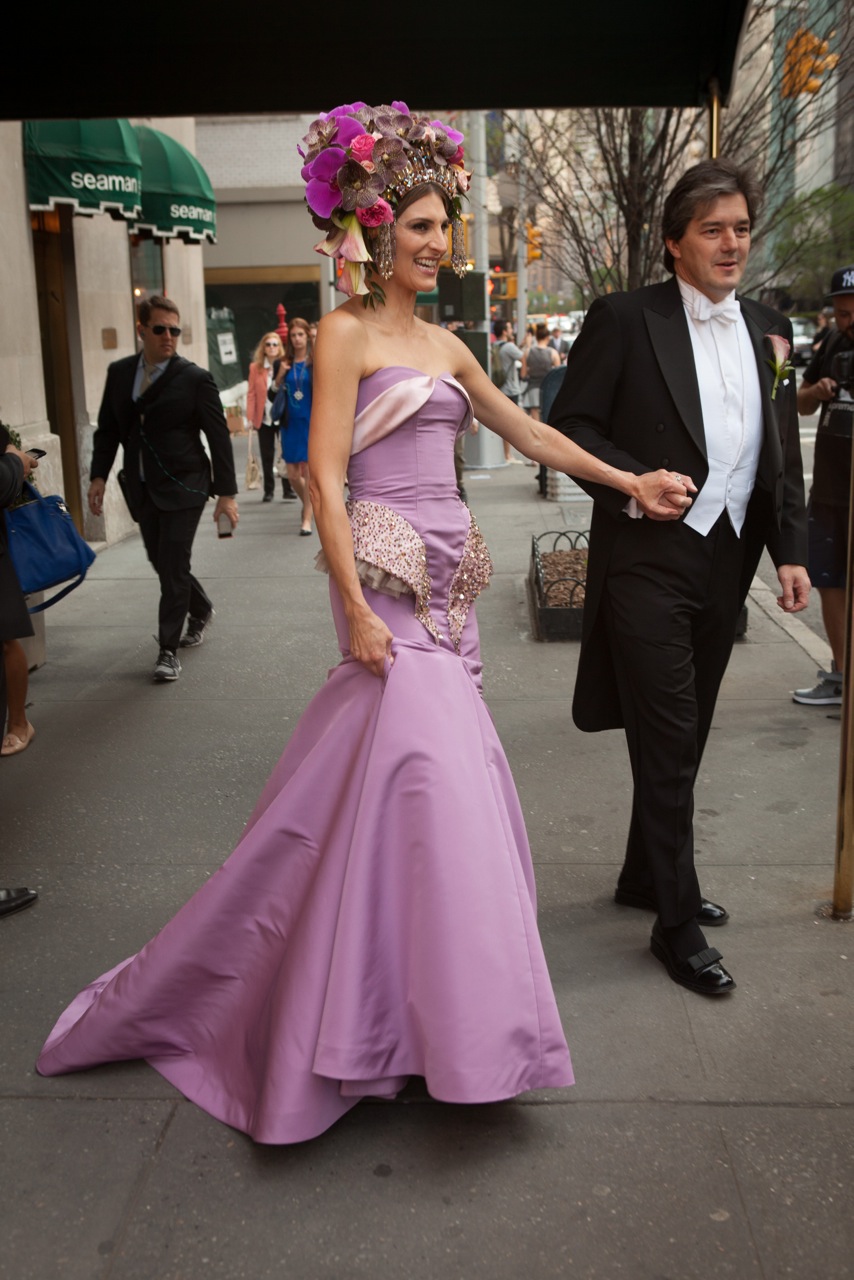 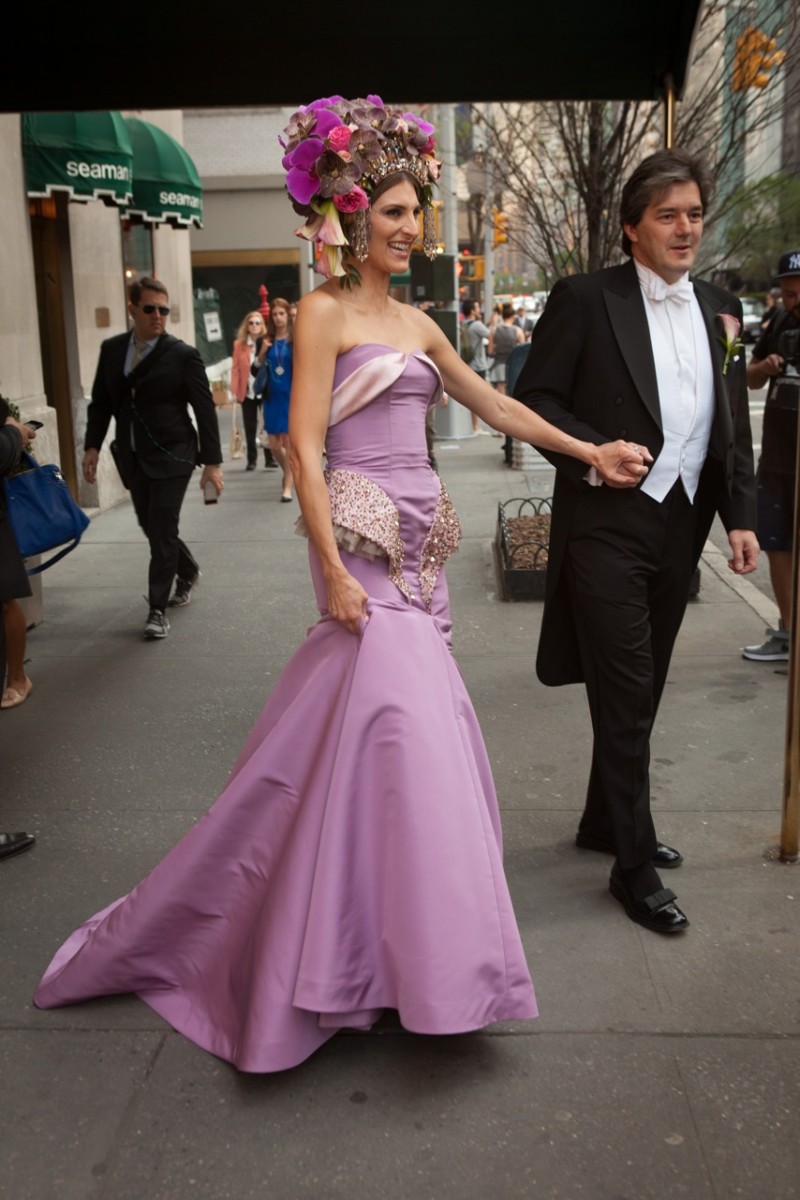 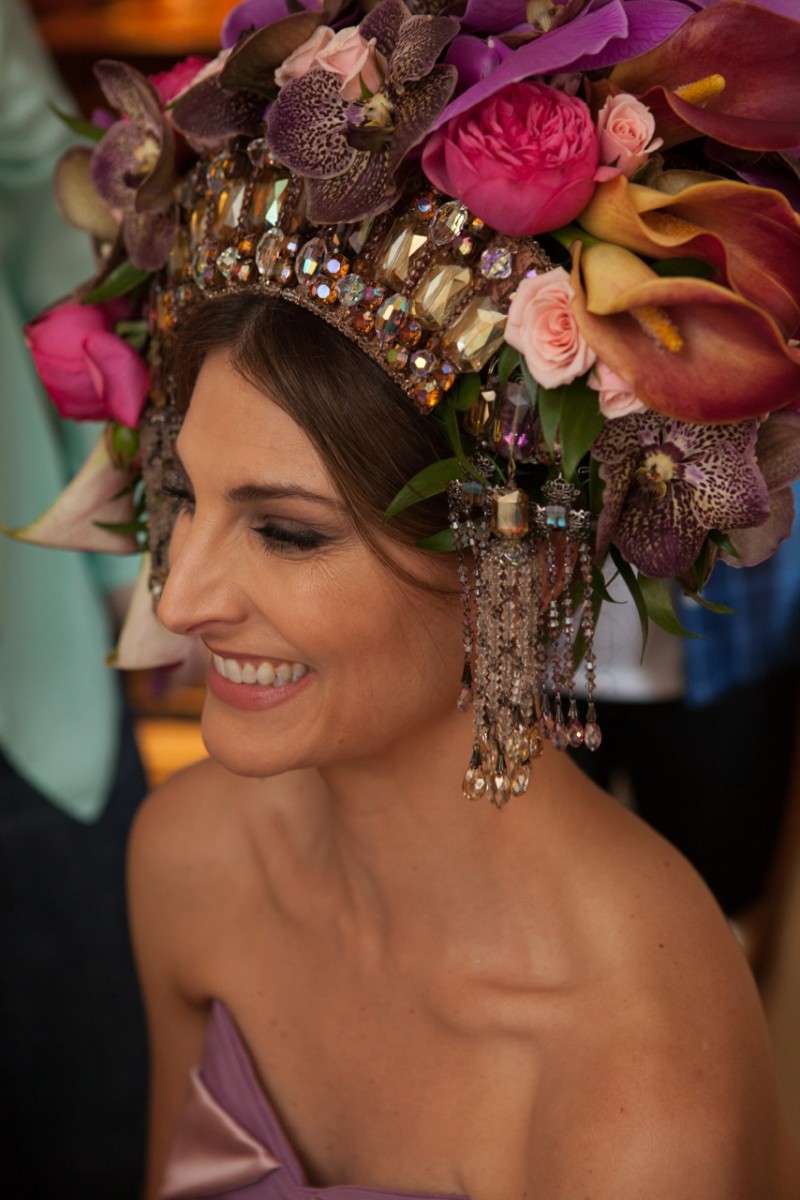 Not everybody took last night’s Met Ball theme and ran with it, but The Daily’s pal and gallerist Blair Clarke certainly did. How did she (and a village) create her gorgeous look for New York’s biggest night? Clarke tells us how she came up with the look, who helped, and what was on the menu at the Met.

“When my dear friend asked my husband and me to join her family at this year’s Met Gala, “China Through the Looking Glass,” my first thought was slight panic…Such an elegant theme, so many historical periods to honor, international inspiration…After gathering my composure, I made one phone call and knew the date May 4th, 2015 was out of my hands…

Khristine Catacutan, the creative director of MOSKOV, is not only an incredible designer; she’s also an art lover who appreciates beauty. She has unique inspiration and a smile that will take your breath away. Working with her for the past two months, not only on the dress, but also the headdress, sketch designs, florals and beauty look was surreal. Khristine and her incredible team, along with Mari Shen (makeup), Joseph Maine (hair), Rachel Shim (nails), transformed me into what felt like a true goddess, at least for the night. Co-collaborators on the Chinese opera headdress, James Coviello and L’Olivier Floral Atelier, were also on hand to custom fit the headdress and flowers to perfection. The fresh arrangement and crystals, courtesy of Swarovski, highlighted the natural brilliance of both.

Inside The Met Gala:
Andrew Bolton’s exhibit was stunning. The drama of the dark galleries allows the historical treasures to shine and every piece truly dances with delight. As you entered the magical water garden, it was hard to believe you were inside the Met. So many of the dresses in the exhibition are modern and only designed in the past few years. My favorite was the gold dress as the entrance piece that literally took my breath away…

The dining area felt suspended under a sea of lavender wisteria, and when Rihanna performed, the crowd melted. Dinner was just as elegant as the enormous wisteria filled gallery. More than four different types of succulent dumplings were plentifully passed around, and there were incredible scallion pancakes and the most delicious red snapper. The gold-leafed, pomegranate-filled sorbet sitting atop a bed of spun sugar was an artful masterpiece in itself. The sugar cookies passed after dinner were also art pieces, and will go in an acrylic box as my new coffee table sculpture. As the guests started making their way through the maze after dinner, my headdress was tightly secure, and Team Moskov successfully pushed me out the door and back home safely. There wasn’t an orchid out of place….

Inspiration Behind The Dress:
Designing a culturally relevant gown while respecting thousands of years of rich Chinese history was a little daunting, but I focused on finding something both Eastern and Western cultures could relate to in a significant way. When I think of China in New York, I fondly recall taking my daughter to Chinatown during Chinese New Year celebrations to see the lion and dragon dances. We loved the color, pageantry, fireworks, and festivities! The dragon is an auspicious symbol of power and good fortune in Chinese history, so I thought that would be a good starting point. I didn’t want to be obvious and do embroidery so I focused on the concept. In Chinese art, dragons have antlers (wisdom), tiger’s eyes (power) and a fish’s tail (flexibility). I loved the curved lines in all these parts of the dragon, which translated the features into a dress. The pillow-like organza underneath the beaded jeweled curves represents the clouds the dragon is able to produce (and also the clouds it inhabits). The colors were originally inspired by the Ming dynasty, but as I read more about the Empress Dowager Cixi, I became inspired by her life and went a different direction. Instead of doing an imperial yellow, though, I read purple was an extremely rare and precious color reserved for royal court members and considered elegant. The dress is made of four different silks: faille, taffeta, organza, and duchesse, in honor of the Silk Road beginning in the Han Dynasty. The gems and colors are also significant, based on the theory of the five elements. Swarovski provided beautiful crystals in light silk (the color of silk in its natural form), lilac shadow, garnet, olivine, antique pink, iridescent green, burgundy, black diamond and golden shadow.

Opera Headdress and Hairpins
Under the patronage of Empress Dowager Cixi, the Beijing Opera flourished. Though it’s only 200 years old, the performances are rich in historical context from thousands of years of stories. My interpretation of a Chinese Opera headdress was inspired by Christina Burch’s portrait of Blair. I didn’t know it at the time, but Christina’s work is coincidentally centered on Eastern philosophies and Buddhism. James Coviello is immensely talented and did an amazing job translating my vision and improved on the initial concept. I wanted to lighten the headdress and make it more modern, so the feathers and fur pompoms were replaced by a floral arrangement courtesy of L’Olivier Floral Atelier. L’Olivier uses such stunning blooms and gorgeous color in their arrangements–they were the perfect choice to realize the full look, and one of my favorite UES florists. We also created hairpins with James. Hairpins weren’t just decorative, they signified social status, marriage-ability (girls would receive them on their 15th birthdays as a sign of becoming adults and would start wearing them in their hair in coiled buns instead of braids as a calling card) and lovers would break them apart on parting and upon reuniting put them back together as proof. 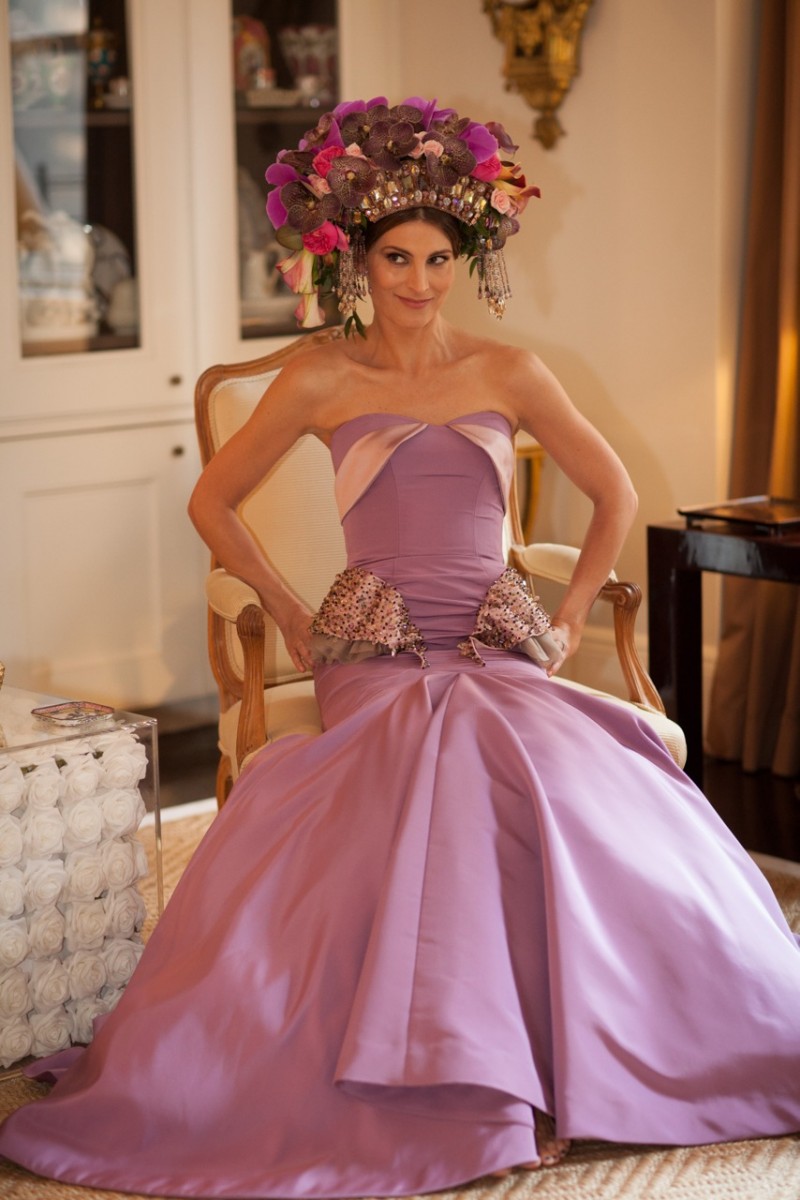 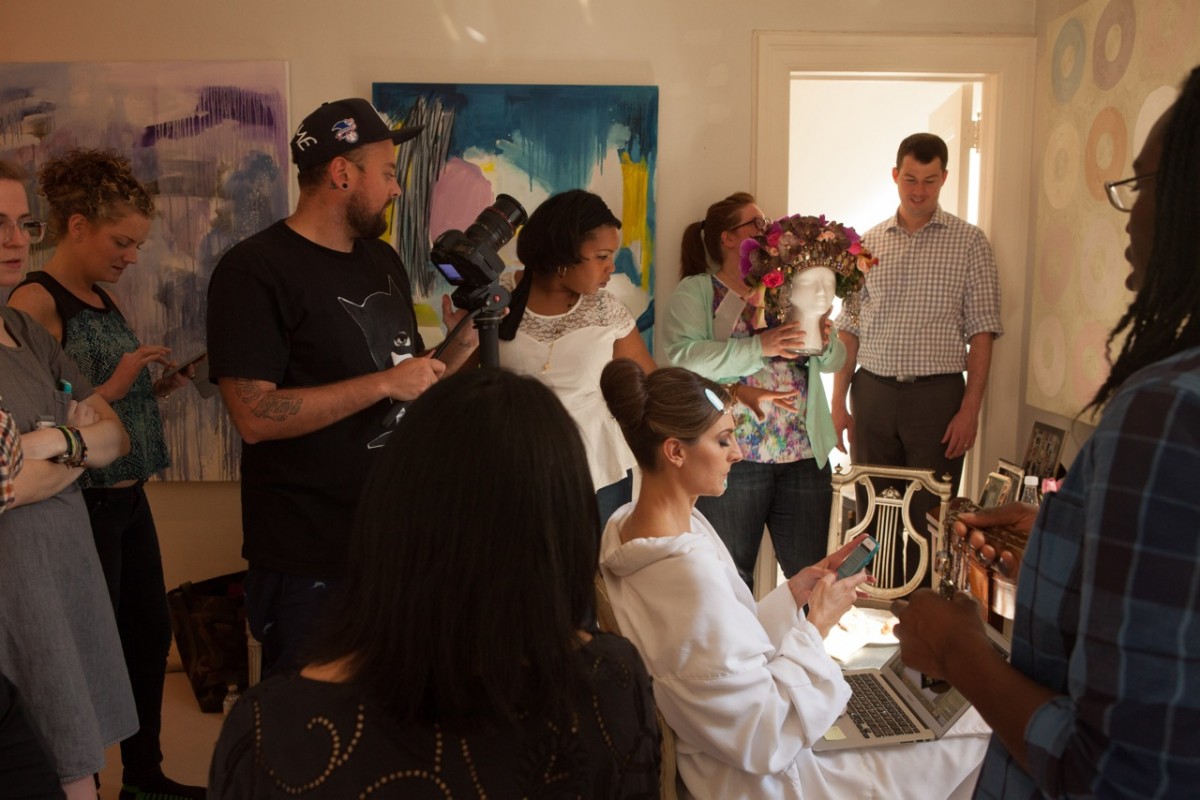 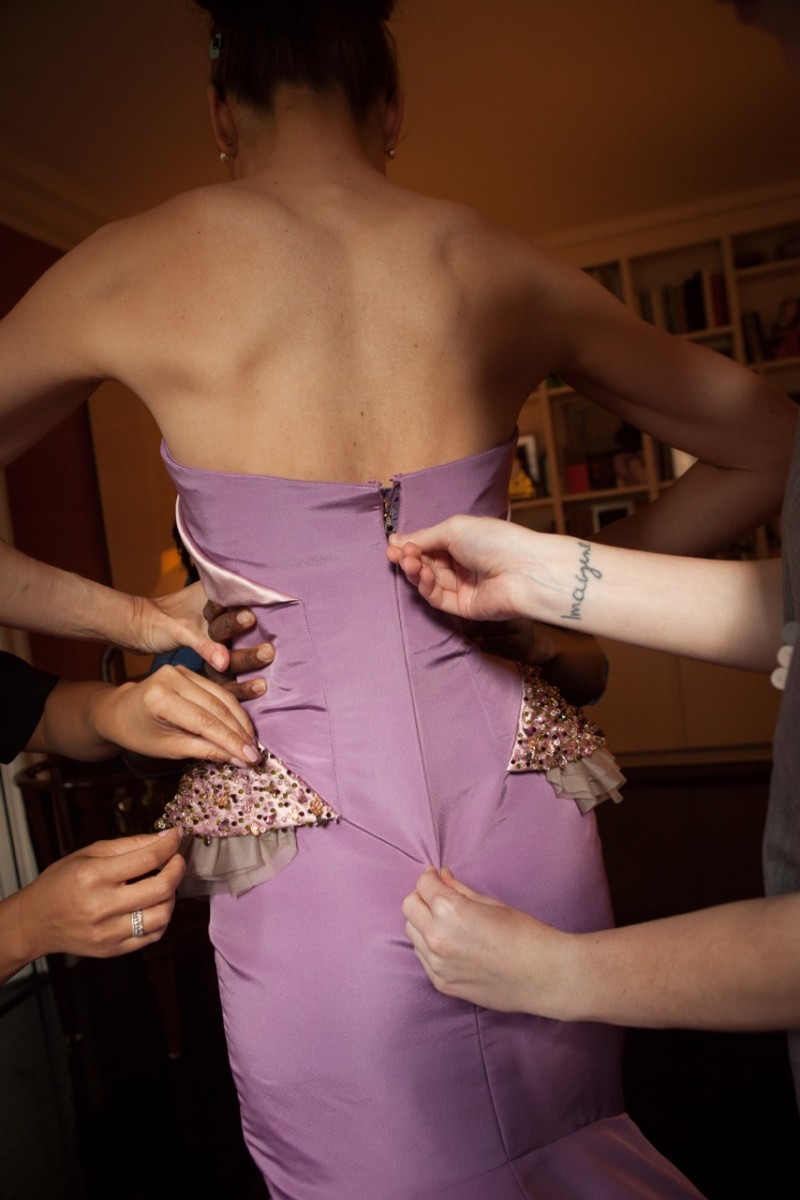