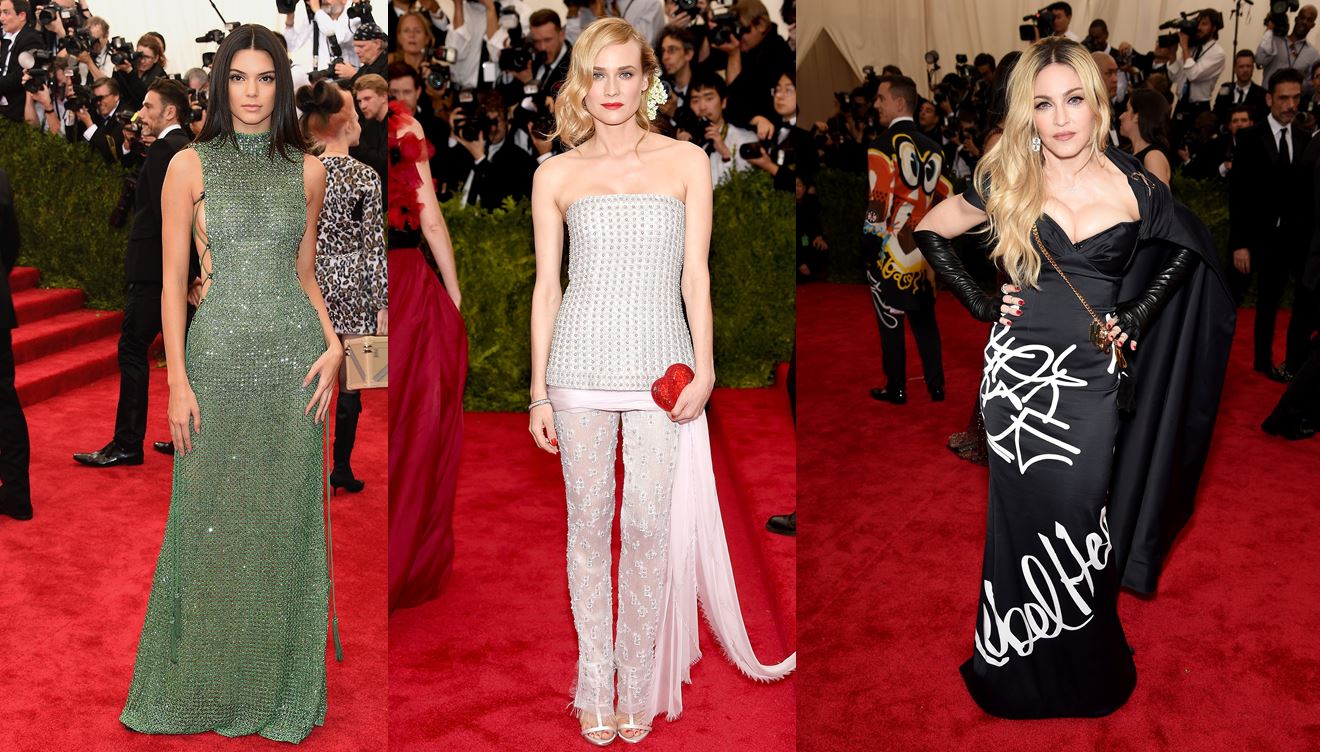 The Met Ball is the hautest event on New York’s fashion social calendar, so it goes without saying that the outfits that grace the red carpet range from sublime style moments to total disasters. Take a look at the celebs that received their exclusive invitation from Anna Wintour in our gallery below. As for this year’s theme? “China: Through The Looking Glass”. Attendees took plenty of creative freedom with their looks.

First off, the most discussed outfits of the night certainly included Rihanna’s canary yellow cape dress by Guo Pei, featuring an intricate embroidered detail and some serious fur trim. This frock was so large it required no less than three handlers to carry her train as she walked around. As she walked the carpet, Rihanna was overheard saying that the most difficult part about her dress was its weight. Next up? Beyonce, who arrived fashionably late and decked out in a totally sheer tulle Givenchy dress with an appropriately sized train and a smattering of strategically-placed crystals.

An unsung beauty of the night was Allison Williams’ ruby red Giambattista Valli Haute Couture gown. Featuring voluminous waves of fabric on the skirt plus cap-sleeves, it was fairly daring for an actress that tends to favor safer red carpet getups. A handful of other leading ladies also opted for hues of rogue, befitting for the theme, since the hue symbolizes good luck in Chinese culture. While Gigi Hadid bared some skin in a plunging DvF frock, Poppy Delevingne wore actual poppies on her Marchesa-designed dress. Also in poppies: Anna Wintour, who went with Chanel Haute Couture for her big evening. (However, Wintour’s close confidante, Karl Lagerfeld, was notably absent.)

Additional red looks included Sienna Miller’s heavily embellished Thakoon pantsuit, paired with tasseled Jacob & Co earrings, while Reese Witherspoon played it safe and simple in a red strapless Jason Wu number, and Rita Ora kept in classy in a silk Tom Ford look. Even Miguel rocked a red tux, from Michael Kors. Amal Clooney totally stole the spotlight from George Clooney (yet again) in a ruffled column dress created by John Galliano for Maison Margiela. While some compared her look to the dancing lady emoji, it suited the chic lawyer, while the leather and stud detailing was a subtle nod to the evening’s theme.

As far as dates go, this is definitely the night for designers to go all out with their guest invitations. Case in point? Marc Jacobs escorted Cher up the Met’s stairs, in a fully sequined gown of his own design. Alexander Wang had quite a few dates: Lady Gaga, Zoë Kravitz, Miley Cyrus, and Taraji P. Henson. Of that crew, Gaga’s dress was the biggest, featuring a netted kimono-type situation and an elegant black silk dress underneath. Also having fun with his dates? Jeremy Scott, who escorted Madonna and Diplo in his Moschino designs, while coordinating his own graffitied tuxedo with Katy Perry’s faux-vandalized strapless number.

Cara Delevingne definitely takes the cake for the most creatively accessorized attendee of the evening: She enlisted tattoo artist Keith “Bang Bang” McCurdy to paint Chinese flowers and birds to accompany her Stella McCartney jumpsuit. But as for the frock that felt quite zeitgeist-y? That would be Kim Kardashian’s nude tulle and white feathered number, which was Peter Dundas’ first creation chez Roberto Cavalli. The aesthetic was nothing new, as Kardashian noted that Cher’s first-ever Met Gala frock was the inspiration, but it was certainly a conversation piece. Meanwhile, Kanye was occupied with making sure that no other celebs stepped on Kardashian’s train, but despite his efforts, she still left a trail of feathers wherever she went. However, Joan Smalls’ purple one-sleeved number, also created by Dundas for Cavalli, with a waist-cinching belt and covered in beautiful blooms, was more a hopeful look towards what he’s working on at the maison.

So, who missed the mark? Kris Jenner‘s red satin Balmain was a bit too ‘80s, especially with a pair of oddly-shaped shoulder pads. While Anne Hathaway’s hooded liquid gold look was particularly unexpected, and a bit random, it wasn’t as mind boggling as Sarah Jessica Parker’s flaming headdress. Paired with a custom H&M frock and arms clinking with jade and diamond bangles from Jennifer Fisher and Cindy Chao, at least she committed to really bringing the Far East to New York.

Other eye-catchers: Kendall Jenner’s jade green Calvin Klein look with a side-baring lace up detail, Jennifer Lopez in yet another scandalous Versace gown, and Diane Kruger in a Chanel tube top and sheer pants. Also in pants was Vogue‘s Grace Coddington, although she opted to wear a pair of blue silk Chinois-inspired pajamas and paired them with some white slippers. Pourquoi? “I have to take a flight,” Coddington explained. “I’m only staying for cocktails, and Anna said, ‘Why don’t you get yourself a pair of pajamas, then you can go to the airport and sleep on the plane.”

Georgia May Jagger in Gucci

Après-Midnight: What Went Down At The Met Ball After-Parties