DailyCandy Will Shutter Next Week 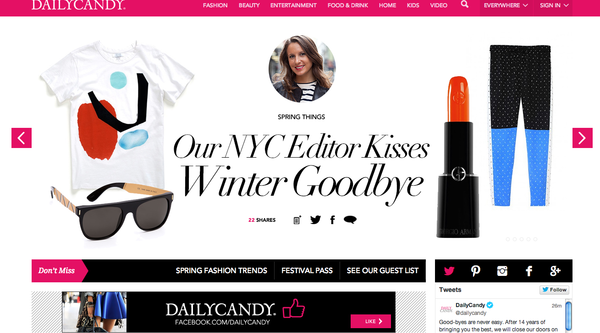 (NEW YORK) DailyCandy is calling it quits: The lifestyle site, known for its plethora of newsletters, was founded in 2000 and purchased by Comcast in August 2008 for $125 million from Pilot Group, an NYC investment firm. Comcast then bought NBCUniversal last year, four years after the acquisition began, and had purportedly planned to meld DailyCandy’s content with its entertainment offerings, like E!, Bravo, and Oxygen. DailyCandy’s 64 employees may be offered gigs at other NBCUniversal sites, but presumably many will be back on the job market.

In 2012, Alison Moore was poached from HBO to become executive VP and general manager at DailyCandy. Before arriving at DailyCandy, Moore helped launch HBO Go, among other projects for the premium cable network. Moore is expected to stay at NBCUniversal in some capacity, according to Re/code, which broke the news of DailyCandy’s adieu. At 1 p.m. today, DailyCandy made the news official on their Twitter account: “Good-byes are never easy. After 14 years of bringing you the best, we will close our doors on 4/4. Thanks for the memories. Xoxo”

DailyCandy was founded by former New York writer Dany Levy, who served as EIC and chairman of the site until 2011. She then spent nearly two years as creative director at Punch! Media. Levy also started her own eponymous creative consultancy in 2007.