I was a bit chic-ed out from The Daily Front Row‘s Fashion Los Angeles awards (Miley, Rihanna, Drew, Kanye, Katy, Kerry, Ciara, Armie…total first-name-only front row) at the Sunset Tower Hotel but was still craving more glam. So avec my pal Christian Leone, I hosted a dinner at his house at the tippy top of Outpost with L.A. friends like Daniel Franzese (the new star of HBO’s Looking), the divine designer Lulu de Kwiatkowski, my sister Minnie Mortimer, artist Konstantin Kakanias, Lily White, Elizabeth Gesas, Alexia Landeau (who recently had a baby boy) and two FLA winners: Ann Caruso (Womenswear Stylist of the Year) and Christian Louboutin (Shoe Designer of the Year). Apres dinner (Christian served meatloaf and salad—tres WASP), I Uber-ed with Minnie, Louboutin and a few more to Bryan Rabin and Adam Bravin‘s super-cool, super-exclusive and super-fun Saturday night disco, Giorgio’s. To get into the dark, cozy club—which feels like a disco one might find in Gstaad or Cortina—you slip through the kitchen at The Standard Hotel, just like that famous Copacabana scene in Good Fellas. That is, if you’re on the list.

I sat with my crew at a private roped off section (bien sur) by the dance floor. But soon Bryan (L.A.’s most popular nightlife guru) brought me over to sit with George Clinton III (The legend behind Parliament Funkadelic), Lenny Kravitz (who seriously does not age. Can we discuss? Anyway, I told the waitress that I’ll have whatever Lenny is drinking), recent Oscar winner Common, and filmmaker Lee Daniels of the insanely popular Empire. In fact, Denzel Washington popped by; Lee is determined to get Denzel to appear on the show, and I bet he will (and soon). I danced with Giorgio’s unofficial hostess, Jody Watley, saw my pal Jason Weinberg, and ogled Sasha Grey. Also there: Brandy, Cuba Gooding Jr., three members of De La Soul, costume designer Trish Summerville, Candis Cayne, and VH1’s Noah Levy. The music is 100 percent unadulterated disco, and everyone—simply everyone—dances. If you can get past the well-guarded velvet ropes, you must go every Saturday you can when in Hollywood. Giorgio’s is always a good idea. 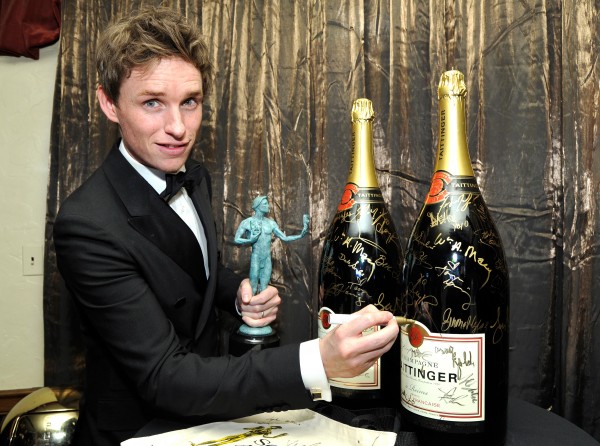 Champagne flows like green juice fasts during awards season, and Oscar nominee Eddie Redmayne signed two Methuselah bottles of Taittinger Brut La Francaise backstage after his Best Actor SAG win. All the SAG winners signed these delicious bottles, which will be auctioned off for the SAG Foundation. I’ll drink a bottle of Redmayne-approved Taittinger any day, and then, like all New Yorkers visiting La La Land, I’ll Uber back to my hotel.