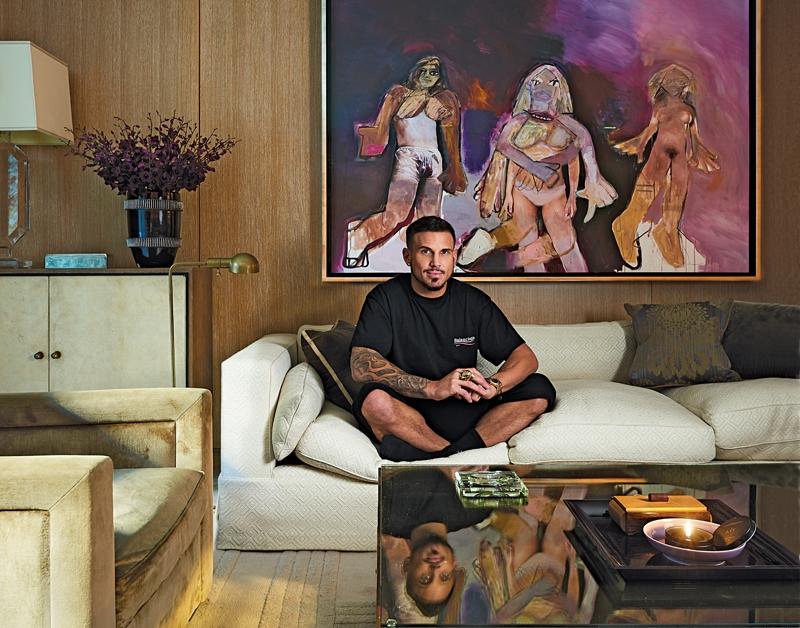 You’re already obsessing over the fabulous life of Char Defrancesco, as seen via Instagram. Isn’t it about time you met the affable candle impresario? Over juice at the West Village townhouse he shares with beau Marc Jacobs, he revealed his scents and sensibility.

This place smells seriously amazing. Do you have a candle in every corner or something?

No, a lot of it really is the quality of the candle. If you light a $60 candle, your whole f**king room should smell delicious.

Of course. How did you end up making candles?

Originally, in L.A., I found out that I was spending more money on candles than I was on rent, and I thought, “Something’s not right here.” I also noticed that I wasn’t getting my money’s worth in candles—these $60 to $100 candles weren’t living up to what I thought they should be. My roommate at the time had this revelation, and said, “Why don’t you just make your own candles?” So I started researching waxes, and I learned that coconut wax is the best wax you can have—it burns the longest and cleanest and throws more scent, but no one uses it because it’s the most expensive wax there is. I was really doing it to save myself some money, and have a little product of my own. I found a company in Los Angeles—some Malibu hippie-chic type of place—that started making candles for me.

How big is the line?

It’s fairly small—I make batches of only 250 at a time to get the quality right. There are two scents in the collection, although I’m working on more. There’s Bae, which is a baise [Bulgarian rose] smell, and Lit, which is the original scent—agarwood and hashish. Lit is the one we use in the house. 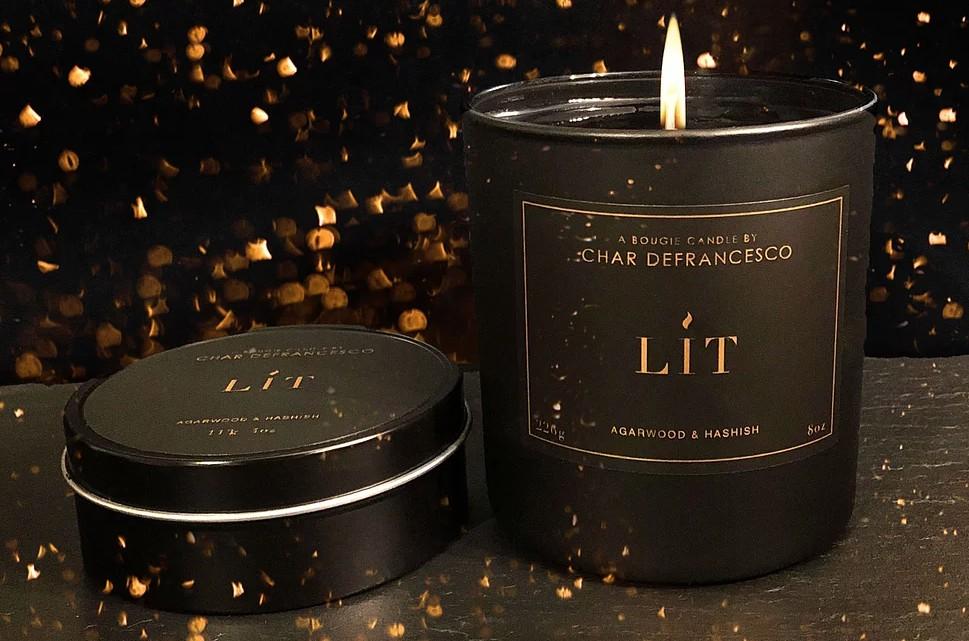 Have you always been a scents guy? What are the first ones you remember?

Michael Jordan Jump. I was in third grade or something! And then CK One, obviously. Acqua di Gio was huge, too. Marc Jacobs Daisy…

Where are you selling them?

Just online [at getlitbychar.com]. I’m working on new boxes, because these candles are so expensive to make that the packaging should reflect that. I’m kind of doing this on my own—Marc’s guiding me a little bit. The branding has all come organically. I grew up partially in Switzerland, and so French is my first language. I always thought it was so funny seeing “Bougie” on a candle, and now all the kids are saying, “Aw, that’s boujee, that’s bad and boujee,” and I thought it was funny to have this bougie candle made by Char.

I was born in Switzerland; my whole family is full Italian. My mom’s side of the family grew up in California, in the movie business and stuff. My grandma was actually an actress in the golden age [of Hollywood]. My mom and dad owned a boarding school in Lausanne, got married, had me, and divorced when I was 3, so I moved back to L.A. Every Christmas and summer I’d spend in Switzerland, though, and I did some school there. It’s beautiful, but there wasn’t a lot going on.

Absolutely. I went to UCLA for political science, and then after school, I opened up a retail store in the Bay Area. Go figure! I was very naïve—my demographic was hip and trendy dads, and I thought I’d kill it. And then the economy crashed. In a crisis, they were the last people to be spending money on themselves—they were spending it on their wives and kids. So after having a failing business, my friend asked me to move with him to New York, so I did that, and started off on his couch, wondering, “What do I do with my life?” I started modeling here and there, and working like five jobs, or no jobs, and I got a social media presence. Everyone in New York is so closely knit. Then I moved back to L.A. after being here for five years, and I started bartending. Then I went through a really bad breakup and decided to redo my closet, and built it all from scratch. I put it up on social media, and it got a lot of response, so I ended up with a side hustle of redoing closets. It led to rooms and interior design. Then I met Marc, and we started hanging out, and I couldn’t really take on any projects, being here and there, and at the time, we were going to Paris a lot, too. I had the candle thing on the back burner.

What are your tricks and tips for creating a cool, engaging social media account?

I’m kind of clueless—it’s all pretty organic. I don’t put too much thought behind it. We’re all fun people, especially when we get away. We like to have fun and be goofy. One of the first times we went to St. Barts together, we made all these crazy videos, and these headlines came out—Marc, spiraling on drugs again, with his new boyfriend, underwear model Char Defrancesco. How ridiculous! Because we’re making these silly videos, people think we’re f**ked up on drugs? No, we’re just having fun!

Was that weird for you, to all of a sudden be covered in the press as an underwear model?

I’ve been called a lot worse for doing a lot less. [Laughs] I don’t care. My family loves me, I love my family, I have my friends who I love, who love me…life is good. It is what you make it.

We have to talk about your Balenciaga obsession. Have you always been a stylish guy?

Yes. It’s evolved as we evolve. You go somewhere and pick up a different appreciation of a culture or genre. You take in what you like from it, and now that I’m dating a fashion designer, there are some good and bad things—he’s ruined some of the things that I used to think were so cool. He’s told me like 20 things that are wrong with it. And I’ve learned to appreciate other things that I never even knew existed. I’m obsessed with Demna and Raf Simons.

So you’re cool with the dad sneakers.

Marc was into them, and he’s never been into sneakers in his life. I was like, “Those are the ugliest effing sneakers I’ve ever seen.” Then I got a pair, and I was like, “These are the ugliest effing sneakers I’ve ever seen, I need them in every single color.” Fashion is a pendulum—things were getting so luxury and so perfect for so long, that they were getting idle and stagnant. Somebody threw in something ugly and different? Cool. Now I have this thing with my friends—“That is so ugly; I’ll take it in a medium.” If you can pull off something ugly, that says a lot about you.

I go to Equinox, and I try to stay active. Being from California, I like to be outside. I ski, I wakeboard in the summer…getting Marc outside to do anything is a struggle, because when you’re born and raised in New York, you have a different mentality. I don’t surf—I’m not down with sea creatures, to be honest—but I do love the ocean. And I’m trying to get into yoga!

Back when I was a monster!! Happy birthday dear friend @carlosariasphoto

You have quite the art collection here. Any favorites?

I love Drake, I’m not gonna lie. I love Little Kim and her new album. Cardi B, Bruno Mars…

What’s your life like during Fashion Week? How do you stay sane?

Do you go away after the show?

Definitely. We disappear. We never know where, because Marc’s always like, “No, I don’t want to go away,” and then two days before, he’s like, “Nick [Newbold, Jacobs’ assistant], book something.” Last year, we went to Big Sur. The Post Ranch Inn is the nicest place I’ve ever been in my life. We had no cell service, and there were no cars in and out, and we were isolated above the clouds. The first couple of days, I was freaking out, but after you relax, it really is heaven.

What do you hope to do with the candles?

Ideally, it would be nice to be in Bergdorf or Barneys, but it’s not about the money or career goals. This is kind of a side project.

You seem like a super nice guy, but I would not want to arm wrestle you. I saw that video of you and Lorenzo [Martone] at Kate Moss’s birthday dinner!

[Laughs] Our names were randomly picked out of a hat, and I turned beet red, like, “Oh, f**k. I gotta win this! Too many eyes!” But Lorenzo’s a good friend of mine, and he was such a good sport. He might have let me win, I don’t know.

Now that you’re a fixture of the fashion world, what’s the most surprising thing that you’ve experienced?

Anna Wintour is actually one of the nicest people I’ve ever met in my entire life.