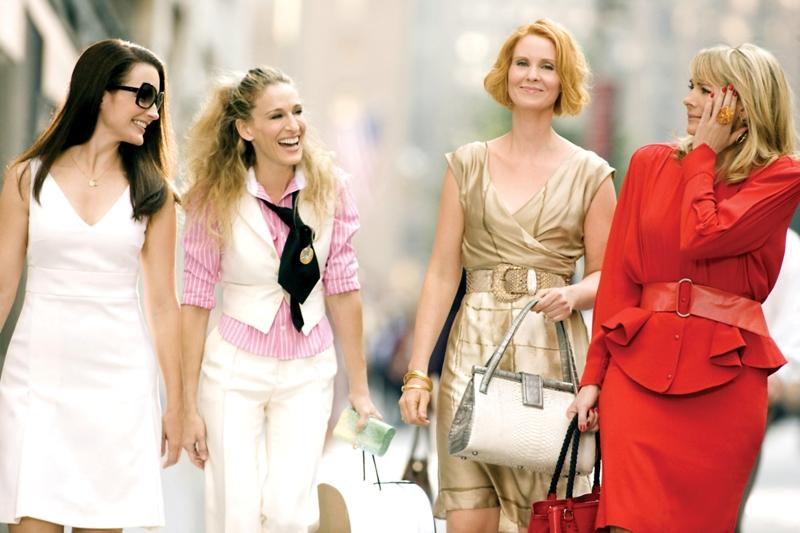 Sex and the City may have stopped producing new episodes in 2004, but the Sex and the City tour continues to this day, attracting fans from all over the world. No, really, it’s still a thing and people are still obsessed. Eddie Roche hopped onboard to meet the superfans who keep these wheels going round and round.

What brings you here?
I did this tour four years ago, but I read it changed a little bit, so I wanted to see what was new.

So you’re a superfan.
Definitely. I’ve got the DVDs and have watched the entire series 10 times since it ended. The last time I watched it was two weeks ago. I wanted to be prepared!

What’s been your favorite part of the tour?
Stopping by The Pleasure Chest.

Which Sex and the City character are you?
Five years ago, I would have said Samantha.

What would you say is your favorite quote from the show?
“Dirty martini, dirty bastard.” Samantha said it to Richard.

Carrie was famously dumped by a Post-it note. Are you still traumatized?
Berger did that. I hated him. He’s a dick. I also didn’t like Aleksandr Petrovsky. I liked him at first, but then he hit Carrie. Leave immediately!

What would you do if you met SJP?
I’d probably go into shock.

Are you watching Divorce?
Who’s in it?

Sarah Jessica Parker!
I’ve never even heard of it.

Melissa Stokoski (aka The Guide!)

How did you get this gig?
I was doing stand-up and a guy saw me and said I’d be perfect for this.

What kind of tourists do you encounter?
A lot of our international guests view New York through the show and it means something to them. Coming to New York wouldn’t be the same for them without seeing these specific things that they already know and feel connected to.

Are people longing for the year 2003?
Oh, sure! Everybody is nostalgic at this point. Who wants what we’re going through now?

Has anybody ever shown up wasted on the tour?
I wish! That would be funny. I’d love to kick someone off the bus for being too drunk! Just kidding! I’ve definitely had bachelorette parties that got out of hand.

How does the tour change after the stop for cosmos?
It’s a radical change! As the tour progresses people start to talk to each other and alcohol only accentuates that. It’s fun to get back on the bus with everyone a little buzzed up.

Has SJP ever taken the tour?
The tour ran into her. She was walking around the West Village. She took pictures with everyone. My tour spotted Cynthia Nixon. She had no makeup on. Everyone could take pictures and she had no idea what was happening!

Are you a superfan?
Not really. I’ve seen the show, but it’s been a long time. We binge-watched them when I was in college. We’d get them at Blockbuster when you actually rented movies. I remember driving there at 11:58 p.m. to get the next season.

What did you learn about fashion from the show?
You can wear anything that you want! I grew up in a small town in Virginia and people are very conservative, so to watch Carrie wear panties out in broad daylight was fun.

Were you familiar with Dolce & Gabbana?
Maybe in a hip-hop song. I certainly didn’t see people wearing it. I learned about fashion brands through Sex and the City.

What does SATC mean to you?
I’m here with four friends, and we grew up together. New York has always been on our bucket list, and we wanted to relive a show that we used to watch. Every time the movie or the show comes on TV, it spurs a group text. We’re reliving memories!

Which character do you relate to?
That’s tough. Probably Carrie. I’m still single. The dating experience is still ongoing for me. I also love to write and have a love for fashion. I’m very career focused right now. Mr. Right will come along.

Are those Manolos?
No. Today, I’m wearing Jessica Simpson shoes, but I normally wear Louboutins. I’m a little embarrassed.

When’s the last time you had a cosmo?
It’s been years, but you have to on the tour. It’s a salute to Sex and the City!

What brings you here today?
My girlfriend made me come. I’ve seen the show once so I was like…okay! Why not?

What have you learned on the tour?
I’ve learned they have great cosmopolitans in New York! I’m zoning in and out.

You’re already on your second cosmo!
I’m from Sweden. We drink fast.

Which character from the show did you find hottest?
Carrie. I like her hair.

What were you up to in 2003?
Watching football.

HOP ON THE BUS! VISIT onlocationtours.com FOR MORE INFO

Microsoft Office or are just looking to refresh your skills for any job or the one you’re already in, you’re in the right spot. Our lessons give a mix of textual content, video, interactives, and troubles to practice what you might have learned, so you can learn the basics and more of Access, Surpass, Outlook, PowerPoint, Publisher, and Word. You’ll also learn tips, tricks, shortcuts, and more to raised use these programs at work and life. Let’s get going!