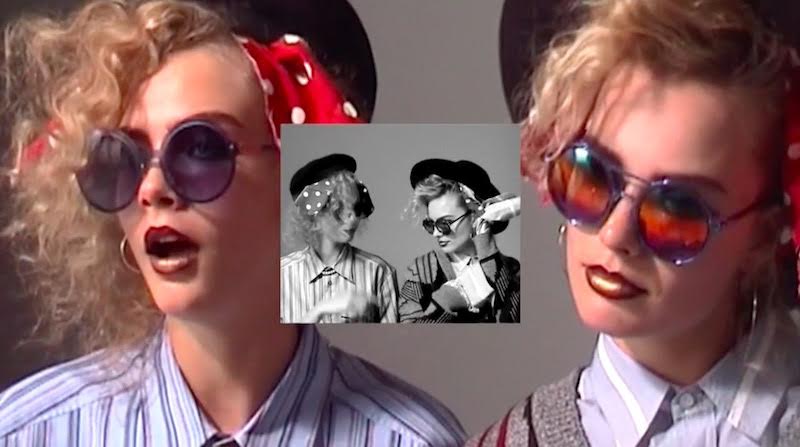 Pals Cara Delevingne and Margot Robbie have joined forces as the cover stars of LOVE magazine’s Fame, Goths and Toffs issue. While it doesn’t hit newsstands until next Monday, July 25, the glossy has unveiled a short film starring the duo titled “Mean Girls,” directed by Willy Vanderperre and styled by fashion editor Katie Grand, set to Sign of the Times by The Belle Stars. Delevingne and Robbie are decked out in polka dot headscarves, gold hoop earrings, and oversized striped shirts, ringing in total ’80s vibes. Hair is in full-on curls, thanks to Syd Hayes, and on the make-up front, Miranda Joyce created heavily-lined copper metallic lips.

“The first concert I ever went to was The Belle Stars. I remember my outfit vividly: white off-the-shoulder cut-off sweatshirt from Way In at Harrods, pale pink pleated skirt with dark pink stripes from Dorothy Perkins, and white flat pointed winkle-picker shoes with a dark and pale pink heel and matching bow detail from Birmingham Market,” said LOVE editor-in-chief Katie Grand in a statement. “Jo Parker had peroxide blonde hair and wore the opposite: pink top, white pleated skirt from Topshop. We were everything, we knew the words to every Belle Stars song and we could take on the world.  Generally we would tie bits of tat in our hair and pull our tops off our shoulders and pout A LOT.  So the thing is, strangely this issue is an ode to my young teenage years.  Cara and Margot are me and Jo Parker, and it’s no coincidence that Miranda Joyce—previously the foxy sax player in The Belle Stars—did the make-up.”

How did Robbie’s and Delevingne’s paths cross? “We met at an event at Windsor Castle, but only really briefly. I know this sounds like I just rub shoulders with royals all the time, but Prince William was at the event. It was that kind of thing, a super-fancy event,” said Robbie in an interview with Paul Flynn. “I remember muttering to my friend Sophia [Kerr], when this waitress asked, ‘Would you like water? Would you like champagne?’ I said, ‘God, I want a tequila.’ Someone overheard. Cara, who I’d never met before, was about five metres away from me and her ears just pricked up and she said, ‘Did someone say tequila?’ I was like, ‘You and I are so going to be best friends.'”

What’s New In the Hamptons This Summer, Part Deux

Cruel Summer by Bananrama……. that song pop in my head!