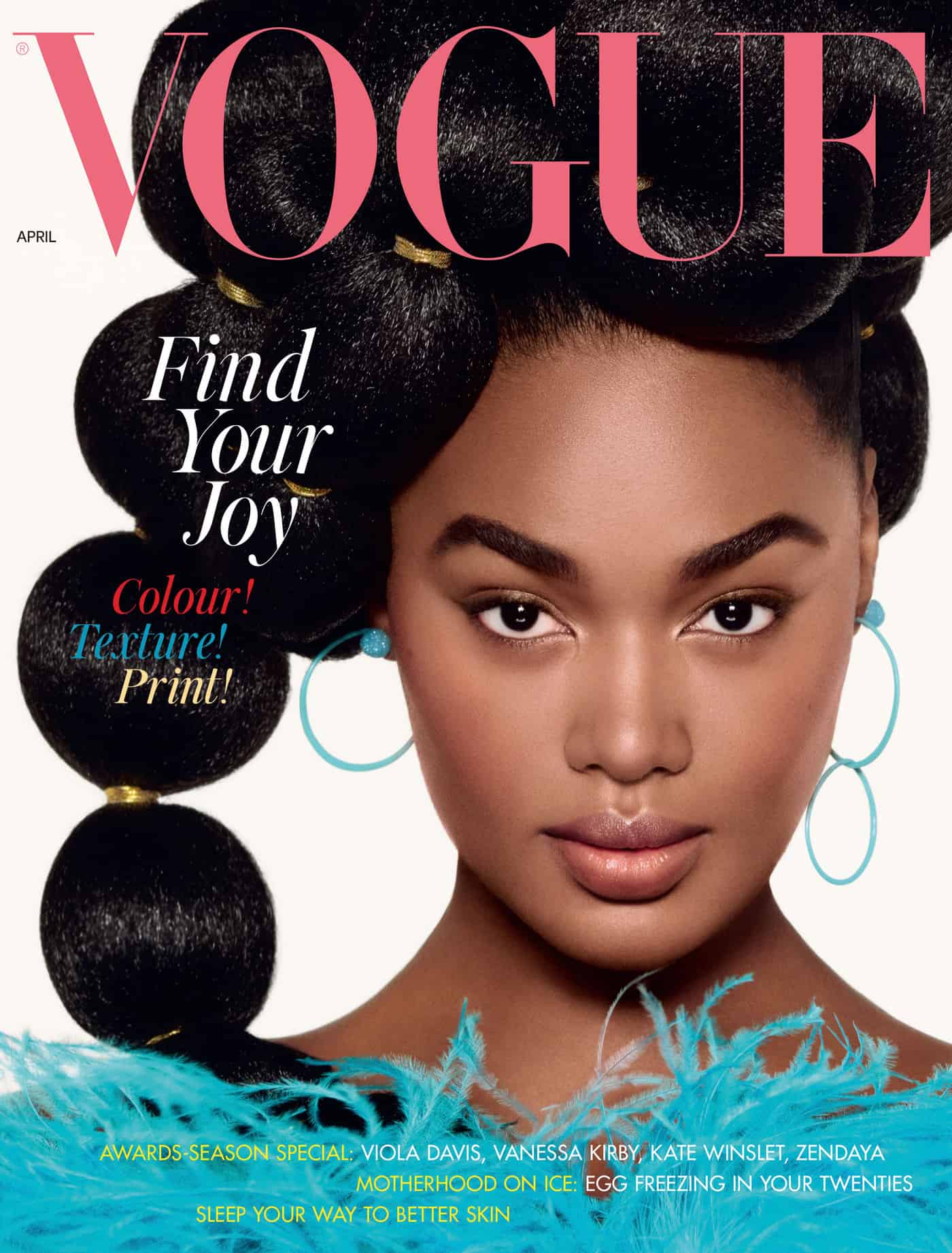 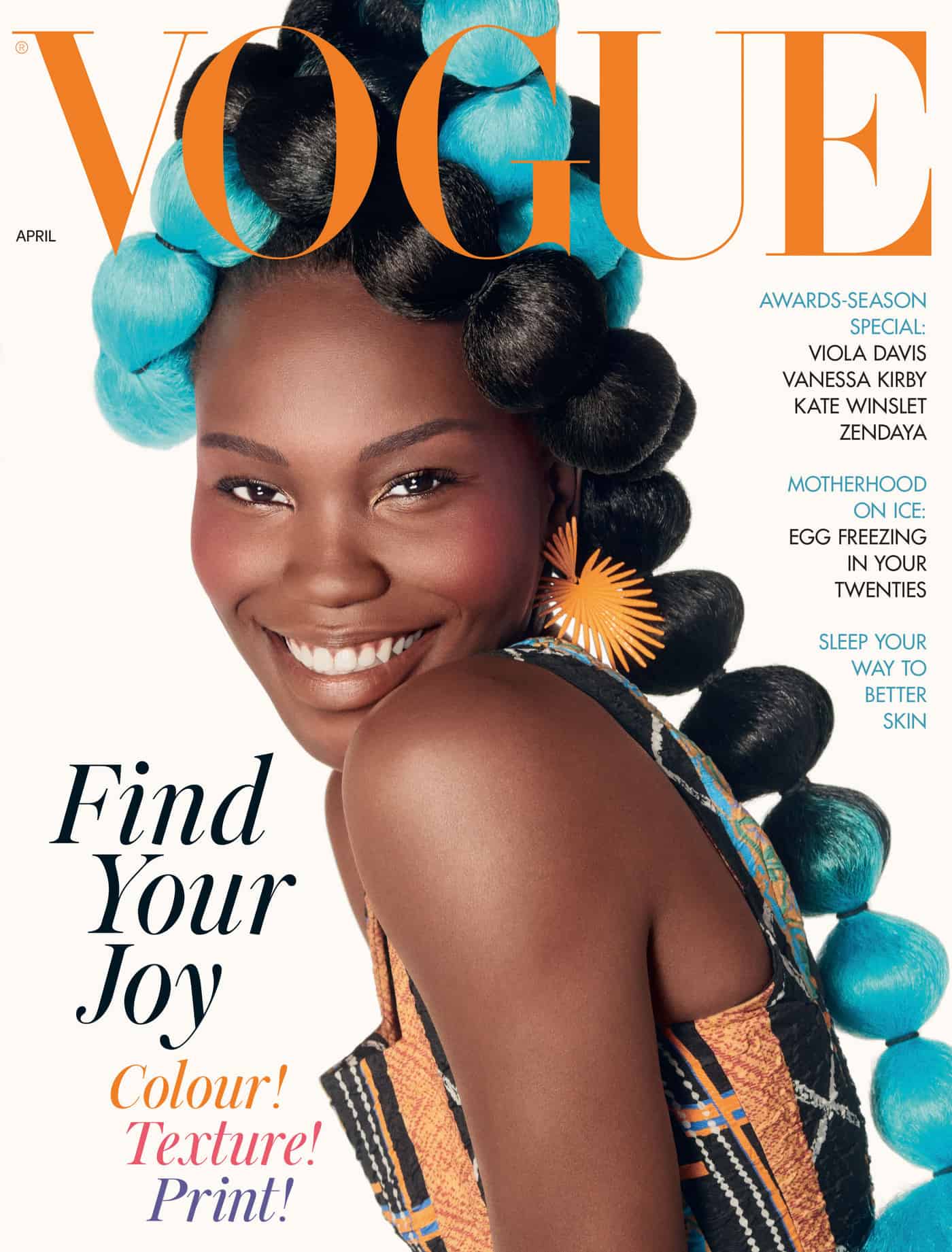 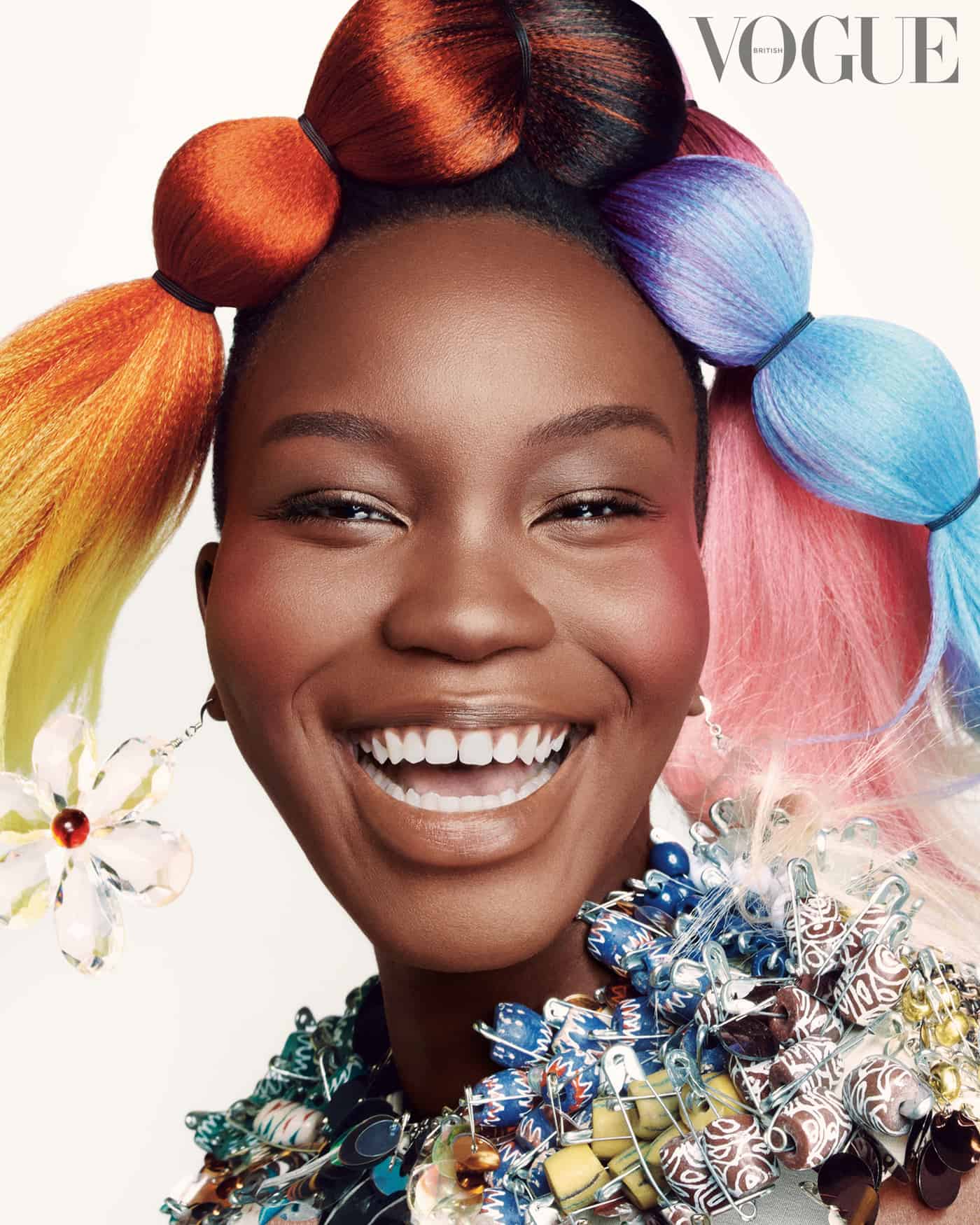 In his editor’s letter, British Vogue’s EIC explains how he and Meisel came up with the cover concept together.

“Blazoned across the cover of British Vogue’s April issue is a word I have been thinking about a lot recently: joy. Given the state of the world, even to write it down feels slightly daring. However, as basic human needs go, in recent times we have all had an insight into the importance of joy, and why it should never be taken for granted.”

“One afternoon, I was speaking with the photographer Steven Meisel, who was at home in New York, and we got to talking, as we often do, about how best to distill the mood of now. Wouldn’t it be wonderful, I said, as this markedly hesitant springtime begins, to dedicate this month’s Vogue covers to the intoxicating and audacious power of joy? Bold colors, exaggerated lines, exuberant smiles, sparkling eyes, glorious skin, celebration and confidence were all in order.” 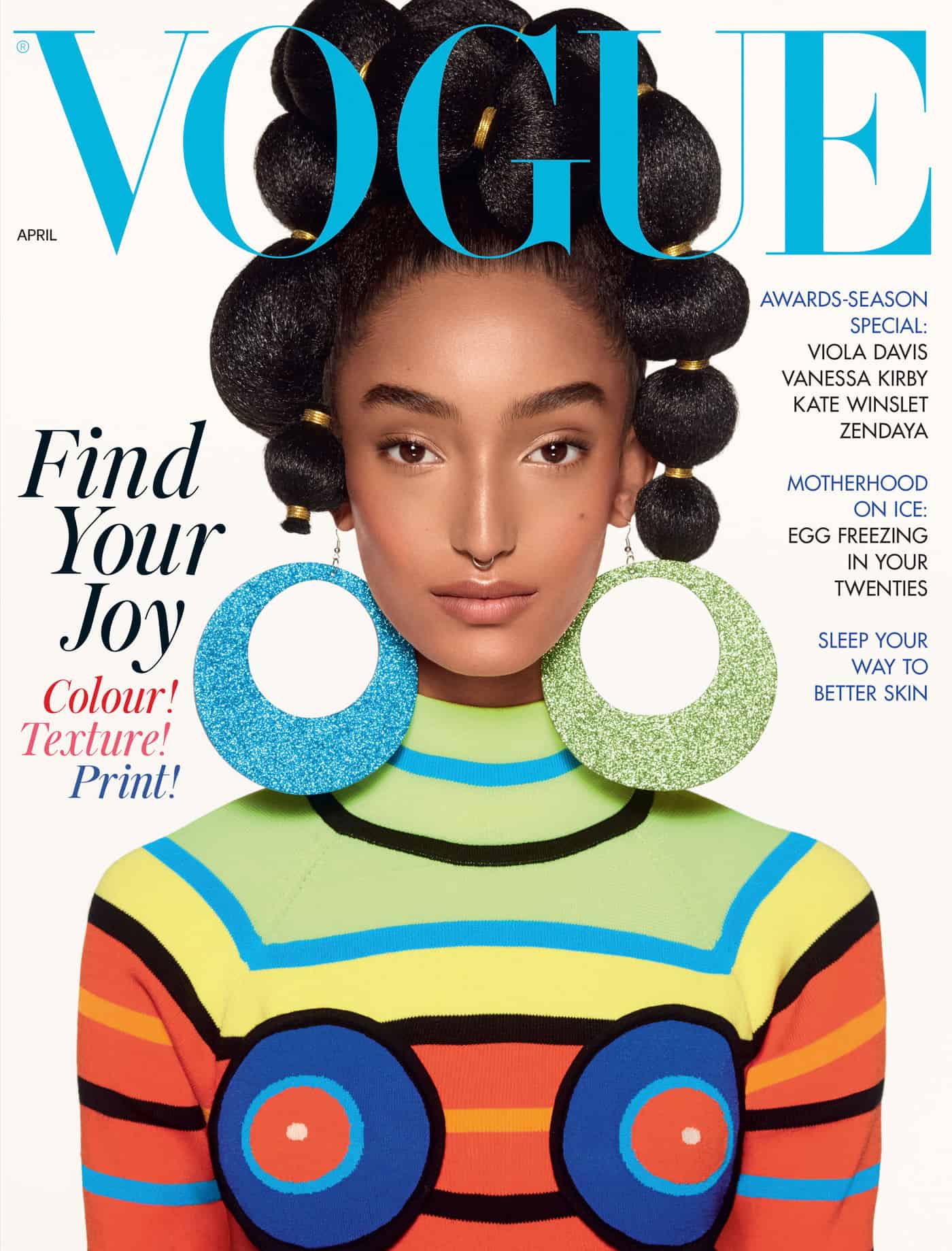 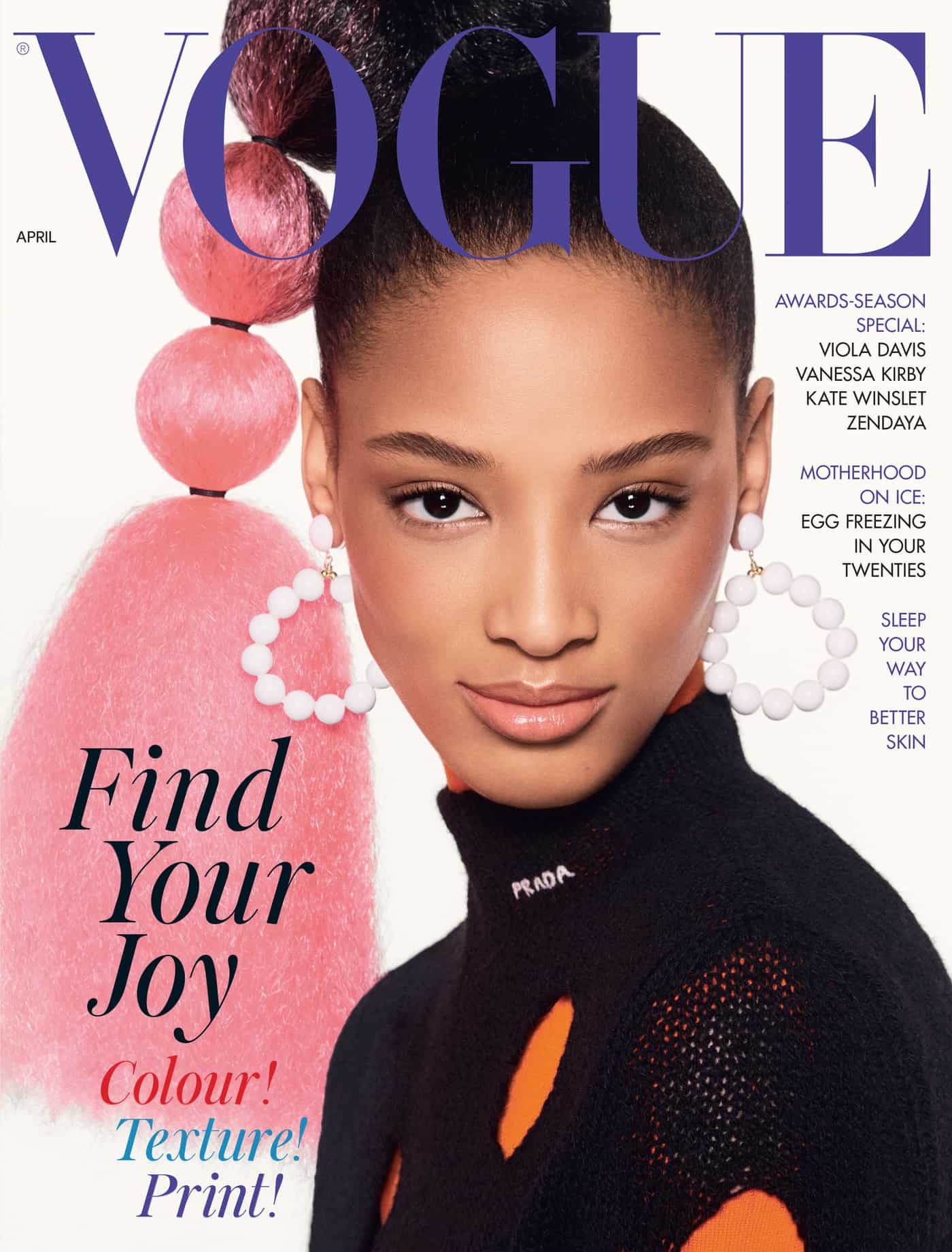 He continued, “I could not be more thrilled with the final casting of our cover stars: Janaye Furman, Precious Lee, Achenrin Madit, and Mona Tougaard—a quartet of extraordinary Black models currently enjoying great success in the industry. I love how each of these women ran with the theme and embodied the mood of the moment in her own way.”

For It Girl Precious Lee’s cover, de Dudzeele—who shockingly has never styled a British Vogue cover shoot before!—put her in a Moschino blue duchess satin cocktail dress, sprayed with hand-dyed ostrich feathers on the neck and hemline. Designer Jeremy Scott tells British Vogue he’s on the Precious Lee train, ever since meeting her at an Oscars after party.

“I became obsessed with her,” he said. “You know, how fashion people get obsessive over things. She is charming, confident but not cocky, smart, cultured, and intuitive: all of the things you need to be a good model…She’s like a magnet, she draws people in…She breaks the mould and, for me, she’s so modern in that way.” We concur!

The April 2021 issue of British Vogue is on newsstands on 12 March.

Thanks To Isabel Marant, All I Want To Wear For Fall ’21 Are Cowboy Boots And Retro Frocks