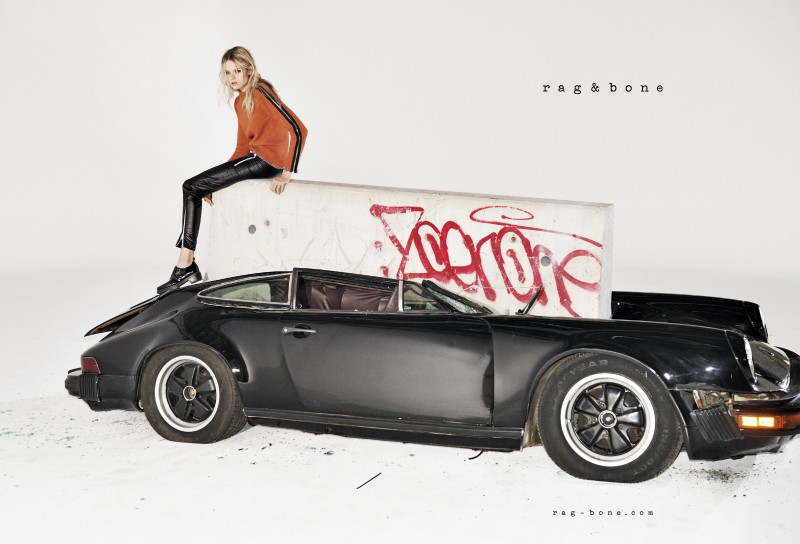 Brit screen gem Gabriella Wilde is at the center of rag & bone’s Fall/Winter 2015 campaign. Like previous campaigns, this one is all about New York, but doesn’t take a literal approach. Glen Luchford captured a tougher side of Wilde’s signature natural beauty amid gritty, urban scenes like a concrete barrier smashing onto a ’79 Porsche 911 SC and black smoke pouring from a manhole cover. Peter Miles art directed the campaign, and artfully condensed aspects of New York City into a studio setting.

“The campaign concept speaks of the contradictions New York is rife with and exactly what makes it such a cool city,” said rag & bone’s Marcus Wainwright. “The unexpected is something we also relate to as a brand and try to inject into all we do, from our collections to imagery.”

“Rag & bone has an understated coolness,” Wilde said. “It is chic with an edge which I love. I loved the campaign concept. It was very different, a bit raw and I love the hardness of the images.”

Styling was done by Jane How and set design by Gideon Ponte, while mane man Duffy was on hair duty and Gucci Westman led makeup. Last year, rag & bone looked to Hollywood for the face of its Fall campaign, choosing Winona Rider and shooting in Coney Island.