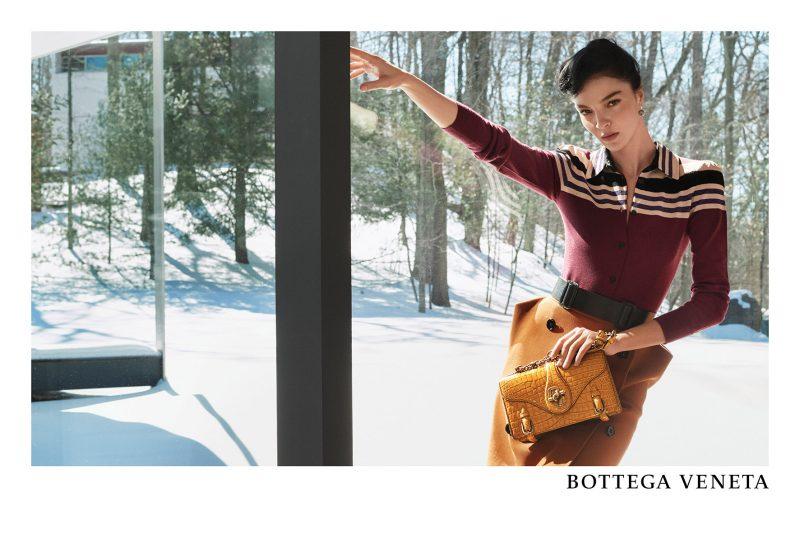 Bottega Veneta unveiled its latest for “The Art of Collaboration,” in which the luxury brand collaborates with artists and photographers to capture the essence of its seasonal campaigns. This season creative director Tomas Maier tapped contemporary artist and photographer Todd Hido, who is known capturing urban and suburban housing throughout the U.S. Hido also shot the brand’s Spring/Summer 2017 campaign with Lauren Hutton at the Modulightor Building in New York, which was designed by famed 20th century modernist architect Paul Rudolph (1918-1997).

This time around Maier chose Lee House 2 in Fairfield County, Connecticut as the setting for the new campaign starring Mariacarla Boscono, Simon Nessman, Grace Chen, and Eva Herzigova. The house was built in 1956 by famed architect John Black Lee, who is often referred to at the sixth of the famous “Harvard Five” architects, which include Philip Johnson, John M. Johansen, Marcel Breuer, Landis Gores, and Eliot Noyes. The house is not open to the public, but thanks to the new campaign, viewers can catch a glimpse inside in Bottega Veneta’s video.

“I love architecture, which is why we always shoot our campaigns in world-renowned buildings,” said Maier in a press statement. “Since Spring/Summer 2017 was shot in a Paul Rudolph house in an urban setting, we had to find a structure that would match that level, and I knew Lee House 2 would deliver. The fact that it snowed gave the models, the clothing and the architecture an additional dimension.”

The campaign shoot was delayed by one day due to a snow storm, but mother nature turned out to be a blessing. “That white background really brought out the colors of the clothing in a way that I had not seen before,” said Hido. “It reminded me of how a cardinal looks so vibrant in the snow.”

Maier first introduced “The Art of Collaboration” series for Bottega Veneta’s campaigns when he joined the luxury house in 2001. Since then there have been collaborations tapping fine art photographers like Nobuyoshi Araki, Nan Goldin, Philip-Lorca diCorcia, Pieter Hugo, Ryan McGinley, and Robert London. The new campaign and video will run digitally from August to December in key markets globally with print ads in 13 countries in both fashion and lifestyle publications.