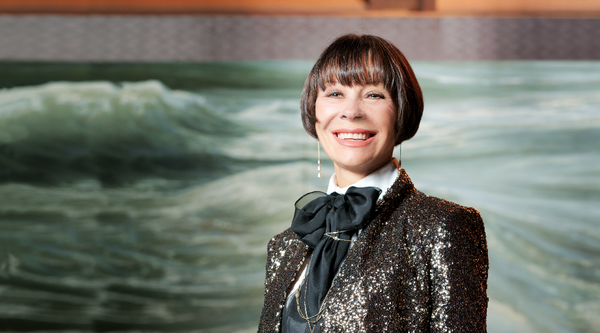 (NEW YORK) As an apres-Christmas treat, here’s another encore morsel of our delicious print features! Less a restaurant than a religion, Le Bernardin looms atop the New York City food chain like some midtown Notre Dame—an ecstatically four-starred salute to the wonders of the sea. But while it may be tough to book a pew, it’s easy to feel at home, thanks to Maguy Le Coze—its bobbed and beatific high priestess, conscience, and co-owner—who’s been spreading her saintly brother’s gospel of raw with chef Eric Ripert for three decades running. She is classically fabulous and utterly French: Behold her awesome power!
BY ALEXANDRA  ILYASHOV

You opened your first restaurant with your brother Gilbert in Paris in 1972. Then what happened?
It had 25 seats, and he was in the kitchen. It was kind of trendy because we were young and had a Michelin star. Then we opened another one with 80 seats and a full staff. After a couple of years, out of the blue I said we should open a restaurant in New York.

Why?
Don’t ask me! I have no idea. I had only been to New York once in my life, for one week! Gilbert said no at first, because there were no good products, no herbs, no nothing here in 1980. But I still pursued it, and after several years I met with someone from the building we’re located in to this day. We opened in 1986 and were a huge success right away. Two months later, we got four stars in The New York Times from Bryan Miller, who was a young food critic at the time. After that, we were absolutely overwhelmed—we had five or six reservationists, because the answering machines were not as sophisticated back then.

How did Eric Ripert enter the picture?
He’d been working with my brother when Gilbert passed away unexpectedly in 1994, and right away we decided to become partners and run the New York restaurant. He was 29 years old when we got his first four-star review—and our third—from Ruth Reichl. He was the youngest chef to ever have that at the time.

What’s your relationship with Eric like today?
He’s like my brother—it’s very strong. It’s difficult to explain.

Do a lot of people ask to take photos with him?
Oh, all the time!

How else has Le Bernardin changed over the years?
We now have an incredibly foodie clientele. A young crowd that’s very, very interested in their food. Everybody takes pictures of their plates. It’s a surprise for me!

Does it bother you?
No. They’re enjoying their food, and they want to share it with all their friends.

How has your role evolved?
At the beginning, I was at the door with the maître d’ all the time, but you cannot do that all of your life, every night. For a long time, the maître d’ was not really an important job, because of my personality.

What about your personality?
I pushed the customers to eat raw fish! I would go to each table, take their orders, and tell them to just try it. You were not born 25 years ago—the cuisine was not what it is now. I would tell diners to just taste—if they didn’t like it, we’d send it back to the kitchen and make them something new. So I was very, very involved.

What do you usually order?
At the moment, my favorite is the striped bass served with fennel, crispy artichokes and Parmesan sauce vierge. I love the tuna carpaccio with baguette and foie gras, too. We can never take it off the menu. I also eat the halibut with black truffle sauce and langoustine with truffles and chanterelles.

How often do you change the menu?
It changes 100 percent throughout the year, season by season. Whenever Eric has a new dish in his mind, I taste it. If I like it, we’ll use it to replace something we don’t like anymore. We both have to agree. If I don’t like it, we don’t put it on the menu.

Do you and Eric have similar tastes?
My brother used butter in his cooking, because we come from Brittany. Eric is from the Mediterranean part of France, so he likes using olive oil. When Eric’s cooking became influenced by Asia, it was difficult for me for a few years. But Eric knows what he wants!

Any desire to open Le Bernardins in other cities?
No. Our restaurant is unique because we’re the only one not to have other restaurants. We want to keep it like that.

Which Le Bernardin dish gets ripped off the most?
The tuna carpaccio! We were the first to do that dish. We didn’t have good tuna in France—it wasn’t very popular, and we didn’t find much of it at the market. We arrived here, saw so much tuna, and thought we should use it on the menu. We tried a few recipes, and it didn’t work out. Gilbert had no training; he never learned with all the other three- or four-star chefs. He learned in our parents’ kitchen in a tiny restaurant in Brittany. But I said we should try tuna raw. We tried it, did two recipes, and sure enough, the famous tuna carpaccio was born.

Where do you dine when you’re off duty?
On Sundays, I go very often to Bar Boulud. My other favorite places are Dovetail and The Modern.

What do you order?
I go out to eat often with a girlfriend who likes to eat as well, and when she looks at a menu, she knows right away what I’m going to order: squab, duck, or short ribs.

You live nearby, non?
I live across the street, in an apartment, which we bought right after opening the restaurant. It’s two apartments combined—I immediately made one of the living rooms into a big closet, because I needed the room. I never throw anything away.

We didn’t know people lived in midtown!
It’s wonderful. I walk to Carnegie Hall, Lincoln Center—it’s very convenient. I go to the opera generally seven or eight or ten times. I go to Carnegie Hall five or six times a season as well.

Do you go to fashion shows?
No. I’m always so busy working.

Which fashion folks are Le Bernardin regulars?
Glenda Bailey from Harper’s Bazaar, Roberta Myers from Elle, Isaac Mizrahi, and the owner of Chanel. But this is not the place where Anna Wintour comes.

Speaking of, what’s the story with your coif?
I’ve always worn it like this; sometimes it’s a little bit shorter or longer, but otherwise it looks basically the same, always with a bang. A long time ago, a magazine did a piece where they grouped me, Anna, and someone else because of our hair. Maybe it was you?

Your skin looks amazing, by the way. What’s your secret?
I never wear foundation, just good moisturizer. Then I wear some eye shadow and lipstick, always by MAC. My three skin care products are from France: face wash, moisturizer, and night cream. That’s it!

What’s your shopping strat?
Chanel, which I will buy in New York. I have a big Chanel collection. I have no idea why I love it, but I’ve been wearing it for decades.

Any other favorites?
I really love Barbara Bui. Oh, and for a while I used to buy Gucci, but for
whatever reason I’ve stopped.

Best Of The Daily: It's A Mock Off! All About VFiles' "Model Files"

Best of The Daily: Natural Beauty, As Told By Tata Harper