Best Of The Daily: It's A Mock Off! All About VFiles' "Model Files" 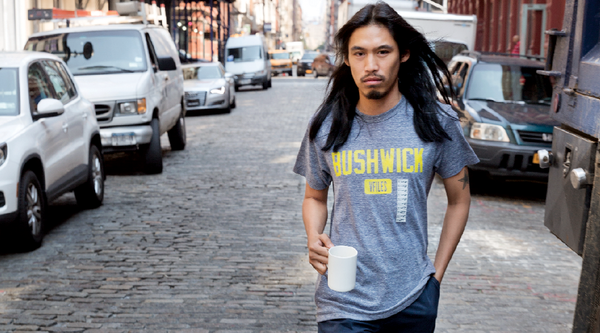 (NEW YORK) Don’t miss this hilarious interview from The Daily during September NYFW in 2013!...Ever wondered if there’s more to life than being really, really, ridiculously good looking? Casting director Preston Chaunsumlit definitely hasn’t.  We talked to the star of VFiles’ hit Web series, Model Files, about his newfound microfame, weepy male models and the best crash diet for overweight babies.
BY PAIGE REDDINGER

How did you get started in the casting business?
I fell into it. I was miscredited in a magazine as a casting director and just went with it. I wasn’t even at the shoot! I got cc’ed on the wrong e-mail. You either have it or you don’t. I think model casting is fun. It’s fun to meet people from all over the world. It’s fun to meet models and nurture careers. What’s not fun is thousands of people witnessing the darkest moments of your life on their iPhones.

What did you think when VFiles first approached you about the series?
Well, initially it was supposed to be about the models, but then it became more about me. I think my honesty and vulnerability is what attracted the audience. I might just have that star quality.

Do you feel you’re at the top of your game?
I like to think I’m always on top.

Do people stop you on the street now?
Yeah, if the street is in Osaka or Bushwick.

What’s been your craziest fan encounter?
Nothing that crazy. Mostly people just send me pornographic material—girls and guys.

How much time do you devote to filming?
I would say most hours of most days. I do my castings while they’re filming. It’s multitasking. I wear different hats. I’m like the deli cat of the VFiles office.

Are there scripts involved?
The VFiles editorial team basically just reads my mind. They plagiarize me, I plagiarize myself—it’s all plagiarism.

What’s your favorite episode so far?
Probably the baby episode where I street cast babies.

What was that like?
Here’s the thing about people with babies. I know it doesn’t take that much to make a baby, but people are really proud of it, so when you tell them, “Hey, your baby could be a model if it loses a few ounces,” they’re like, “Sure!”

What kind of diet do you recommend for babies?
Breast-feeding is the first thing to go, obviously. No carbs, no dairy, no sugar…

Were you surprised the New Yorker wrote a piece about the filming of the funeral episode?
Not at all. Should I have been? Were you?

A little. Did people think it was real?
I think certain people wanted it to be real! We actually received letters from people thinking I was dead. People sent their condolences. That weekend no one called me.

R.J. King and Cole Mohr have made a bunch of appearances on the show. Are you guys friends in real life?
Yes, we’re all really good friends and I really like both of them. They’re really successful models. Cole lets me tattoo him whenever I want. I tattooed “#NYFW” backwards on him, which looked amazing. And R.J. takes me out to brunch all of the time when he can fit me into his schedule.

Is R.J. King as vain in real life as he is on the show?
I mean, his job description is to be vain.

If the opportunity presented itself to turn Model Files into an actual TV series, would you do it?
Definitely. I haven’t looked at the terms of my contract, so that could be an issue, but I think I’ve earned it. I’d want it to run on the OWN network. I’d like to be in talks for my own talk show.

Are model agents dying to get their clients on your show now that it’s taken off?
Model agents are always dying. They die for everything. Guess we’ll see come Fashion Week.

What do you think Fashion Week will be like now that you’re micro-famous?
It’s going to be insane! I’m 100 percent focused on the VFiles fashion show, which is the only show I’m doing this season. I’m casting about 50 models. It’s going to be major. It’s combining four different designers, so it’s four shows in one, with a separate casting for each designer. One show needs scallywag types, another show is going to be very gothic-Lolita-anime types, and another is going to be just, like, sexy. It’s going to be a comprehensive casting of the modeling world.

Who’s your favorite model of the moment?
I don’t have one.

Who’s your favorite non-model?
I guess that would be me.

Do you prefer working with males or females?
Females. Male models are a little too emotional for my taste, but they make great friends. One time there was a male model that cried and threw up and we had to cancel the photo shoot.

Name a few models you’d like to see become “the next big thing.”
I don’t name names and I refuse to take credit for other people’s success. Only my own.

Do you prefer street casting to using pros?
They both have their charms. I would say model casting is great because people are very professional and know what they’re doing. With street casting, people get strange. I think that they want to be asked to do it, but they don’t necessarily want to do it. They’ll show up, but they’re just, like, “I’m here!” They see it as a minimum-wage job. Usually, they’re not even getting as much pay as a minimum-wage job.

What agencies do you use the most?
I use all of them. I use big agencies, small agencies, boutique agencies, and agencies that don’t even have an office and only exist online. I also use Facebook and now Instagram.

You once said the best castings are in jails. Why?
I think there’s something about people in jail that’s attractive, and whether you like it or not, you want that around you. I guess if cops have the power to bring them in, they will. I mean, you gotta collect them all! You know what I mean?

Kind of. Is it something about the uniform?
Yeah, it’s all shapes and all sizes and it’s a very, very monochromatic look. But also the booking process is similar to a casting. You have your stats, the mug shot, the profile…it’s great. I really want that software. You have people that can barely read, like the NYPD, and they just hit a little button and they have an entire database.

Do you know from experience?
I went to jail for loitering across the street from my house on a bench. They lost my paperwork so I was in there for four days. I got rebooked like, five times. It was kind of amazing. I was really popular. I would collect my sandwiches that I didn’t eat because they were stale and I’d use them as pillows.

Does every agency have a token androgynous model since Andrej Pejic broke through?
I don’t know if it’s after Andrej, but they should if they don’t. I think if a model’s not working out they should at least try to switch genders before giving up.

What designers are you obsessed with right now?
I’m really interested in these new designers that we’re casting for the VFiles fashion show. There’s this great company called Gypsy Sport, which is a sexy New York brand. Then we have Ammerman Schlösberg, which is new and just had one collection before. And then we have these two other great designers, Sam MC and Steven Tai. I didn’t choose the designers, but we actually had a competition. It was user-generated so our users chose the designers, but they really impressed us, too. They all make their own designs and we provide them with the dialogue by giving them a show.

Do you ever get hate mail?
All the time. Not from models—they wouldn’t do that, because they want me to cast them. I’ve gotten hate mail from my parents and former employers, though. They love to send hate mail.

Are your models jealous that you get all the attention on the show?
You know, they would never say that they’re jealous, but, I mean, come on.

If you weren’t a casting director or doing the show, what would you be doing?
I would be a dictator of a small, tropical island nation.

Best of The Daily: Catching Up With Costello Tagliapietra