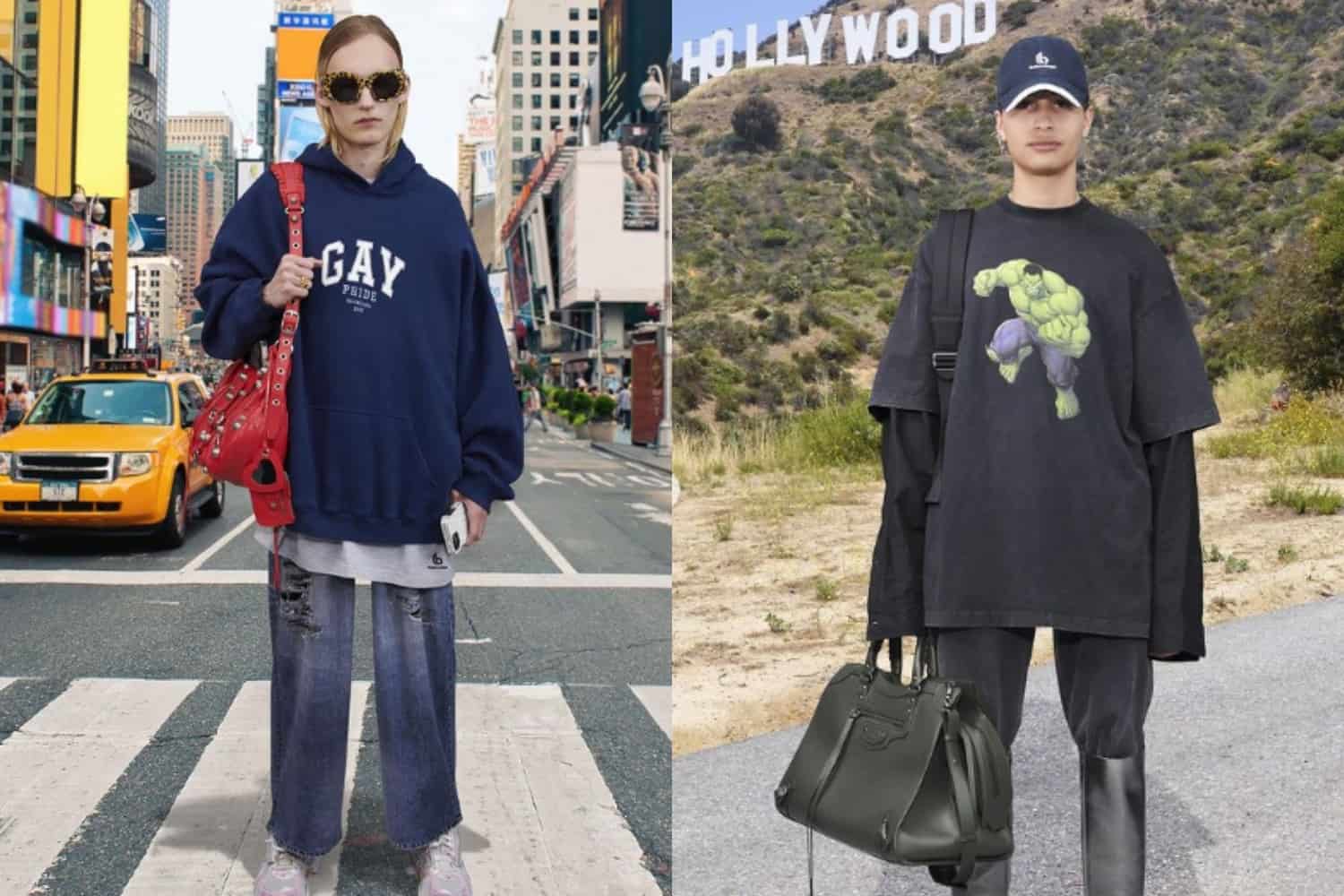 Is it possible for satire to lose its spark? This is one of the questions that arose following Balenciaga’s pre-Fall 2021 collection, which dropped as a digital lookbook this weekend. Presented against a backdrop of famous landmarks, the collection was a mix of athleisure basics and creative director Demna Gvasalia‘s edgy signatures like futuristic sunglasses, reptile-embossed handbags, and statement puffer coats. However, though references have become the norm for designers today, what was once fresh and exciting now feels overdone.

Since Gvasalia’s debut show at the French fashion house in 2016, Balenciaga has become known less for its original elegance and more for its satirical attitude and quirky funkiness. Indeed, though every collection sees feminine pieces like strong-shouldered dresses and exaggerated statement earrings, these days, the word “Balenciaga” make one think of the brand’s Instagram posts more than anything. Gvasalia’s tenure began with a huge social media makeover, and ever since the brand has strictly posted mysterious and obscure photos, sans captions: a miniature dog in oversized sunglasses, a red croc-embossed Hourglass bag propped between a pair of tattooed legs, an onion with a drawn-on anime face that’s topped with a crystal statement ring. He’s also revived styles like the brand’s “City” bag, and frequently knowingly stylizes Balenciaga pieces in brand fonts and colors almost-identical to those of Ikea, Uber Eats, and even Bernie Sanders’ presidential campaign.

The pre-Fall collection, photoshopped against international landmarks in the spirit of travel, saw many of Gvasalia’s signatures that he’s carried over from Vetements: oversized silhouettes, a mix of athleisure and formalwear, and voluminous coats and dresses. However, none of it seemed to have the same spark that kickstarted his Balenciaga tenure. Some pop culture references came in the form of Hulk t-shirts and hoodies, and a GAP-like logo stylized as “GAY.” Gvasalia also returned to familiar tropes like his “BB” symbol, splashed across windbreakers and baseball caps. Most of the bags, dresses, and outerwear seemed like additions to his own subversive aesthetic, and though one update came in the form of sustainable materials, none of the pieces themselves especially stood out. Though Balenciaga’s recent items have veered more into the strange than the stylish—such as the brand’s toe-accented heels, armored boots, and totes mimicking dog food bags—and often sell out, it seems that “too much of a good thing” can be possible.

This could be due to timing: after all, the brand’s combined “Aria” collection with Gucci—which many dubbed the collaboration of the decade—premiered days prior in an explosion of glamour. But the wry, witty spirit many have come to expect from Balenciaga didn’t seem fully present in Gvasalia’s latest collection. Most of the separates felt more drab than fab, with this writer wondering how much a pair of straight-legged distressed jeans or shapeless sweatpants will cost when they’re by the French house instead of, say, Hanes or a vintage shop. Pieces like loud 80s-inspired floral dresses, thigh-high pointed-toe boots, and exaggerated jewelry were a slight saving grace, but overall they didn’t feel new. In general, the collection didn’t seem to move the needle, per se; there wasn’t anything especially groundbreaking or shocking that Gvasalia hadn’t already shown in past collections, and it was unclear if the clothes could “hold their own” without the iconic luxury label’s name attached.

The public also seems divided on Balenciaga’s latest. While fashion commentator José Criales-Unzueta spotlit the brand’s blatant Gap reference, he didn’t have major praise for the collection. “I am no longer excited about Balenciaga. What at first felt disruptive and challenging now feels expected and redundant,” Criales-Unzueta stated on Instagram Stories, adding how the clothes “aren’t exciting or particularly covetable.” YouTuber and fashion critic Luke Meagher (AKA Haute le Mode) similarly concurred on Instagram that the collection was “not anywhere near revolutionary,” though he did note how Cristobal Balenciaga’s love of volume was present.

Audiences weren’t thrilled either. Some stated their favor for certain bags and boots on Instagram and Twitter, but generally clarified how the collection displeased them. “You picked some of the best looks, but I don’t know what to think about the whole collection,” one user commented on Meagher’s post, while another spilled under Criales-Unzueta’s Instagram feed post: “Referencing and quoting over and over again without showing clothes and products that are creative, exciting and new doesn’t cut it anymore and hasn’t for quite some seasons now.”

Wherever Balenciaga goes in the future, it’s clear the pre-Fall collection will have to contend with mixed early reviews and a stronger public desire for clothes with heart when it hits stores this summer.