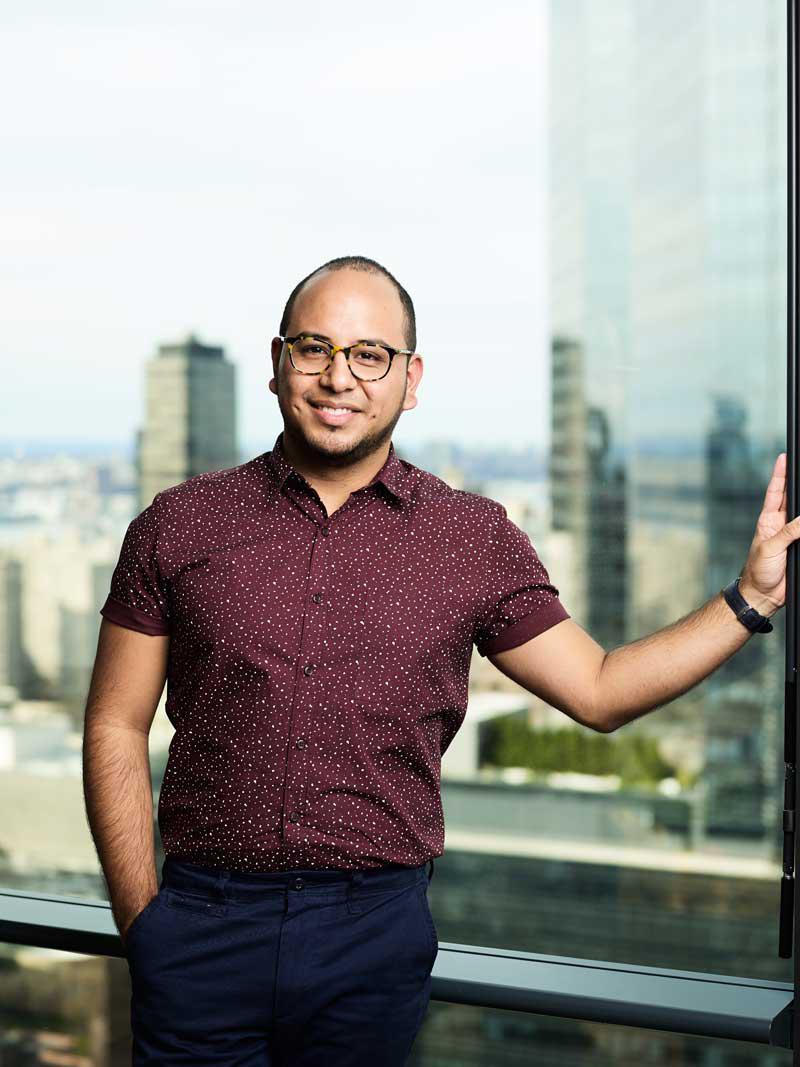 This week, we report on our trip to the very yellow office of Gayle King, editor-at-large of O Magazine and bestie to the one and only Oprah, where we spent some time with her assistant, Joseph Zambrano. His obsession for Beyoncé runs deep, his playful Photoshop magic is next to none, and his Instagram (@JZnotthatJayZ) is guaranteed to entertain. Meet the man who helps keep the Gayle show running!

Joseph, where are you from?
I was born and raised in Queens, like Nicki Minaj. My parents are from Ecuador, so I was the first one in my family to go to college. I got a journalism degree because I’ve liked magazines since I was little.

When did you know you wanted to get into magazines?
My mom would take us to the library all the time to make us read, and I’d tell her I was going downstairs to get a book. But really it was because that’s where all the magazines were. The Britney Spears Rolling Stone issue with her top off and a Teletubby—that was the first time I was like, What is this and how can I do that? My parents wanted me to be a soccer player like every hispanic parent.

Are you good at soccer?
No. I stuck it out as a kid because there was this lady on a bike who would sell empanadas. I’d pretend to play, then I’d hear her bell and I would stop and let the ball pass as I’d be mouthing to my dad, Get me two! When I turned 12 or 13, I was like, I can’t do this anymore. I was willing to sacrifice the empanadas to quit soccer.

So how did you end up at O?
I saw an internship opening on Ed2010. I’m a big Beyoncé fan, and at the time she was pregnant with Blue Ivy. I wrote my cover letter on how I wanted to interview her [Blue Ivy] as soon as she was born. It caught Arianna Davis’ eye, who was Gayle’s assistant at the time. That was my last semester of college in 2012, and I kept in touch. She emailed me one day that she had been promoted and they were looking for someone. So here I am!

And you just celebrated a work anniversary!
Yes, it’s the day after my birthday, so the party kind of carries over. Gayle and I usually have lunch, but she was on vacation. She’s on vacation now, actually. [Editor’s note: According to The Daily Mail, Gayle was on a yacht with the Obamas, but loyal assistant Zambrano did not disclose.]

What was your first time meeting Gayle like?
We had this thing called the Daily News Digest, and the intern was in charge of scanning papers like the New York Post and The Daily News and gathering the top headlines. I’d jazz them up, and Photoshop in a little picture, like The View girls, but with my own cast, so Oprah, Gayle, Michelle Obama. After a week Gayle went looking around the office for me. That was pretty cool.

What was your interview for the assistant position like?
I was nervous, but it was more like a conversation. We met at the Hearst Cafe. As soon as we started talking, it felt really easy. There was a connection.

How was the first day?
It’s a blur. I know that I wore baby blue dress pants. Arianna sat next to me and trained me. It was soaking it all in: her cars, her meetings, who’s who, who to make happy, who to let fall to the side.

What were you surprised to learn about Gayle?
I thought other people did her Instagram for her. But now, I’m like, who else would write captions like that? The long thought process, the pictures, the filters.

What does she usually do for lunch?
She’s on Weight Watchers, and she’s good at keeping her points. But there’s a side where she loses control [Laughs]. Usually she’ll stick with the salad, fruits. Our bodies are made up of 100 percent Hearst cafeteria.

How often is she in the office?
She’s here every day. The only time she isn’t is when she’s on vacation or traveling for a story for CBS. Even when she was in D.C. for a day, she came in at 5 p.m.

What are your hours like?
I come in at 10, which I love. Gayle gets in at 11:30, after her CBS morning show and meetings. That gives me a window to A. be late or B. catch up on whatever I didn’t finish the day before.

What kind of boss is she?
She’s who you think she is. She’s fun and nice. We’re always talking about pop culture news, because she knows everybody. We can be laughing and talking, but when work has to be done, we’ll switch gears instantly. She’s professional, and very, very, very hardworking—she gets up at 3 a.m. and doesn’t go to bed until 10 or 11 p.m.

Wow! How does she stay energized?
She only does tea, so it must be good karma. The only time she’ll be tired is if she’s jet lagged.

Have you traveled together?
Yes, when Oprah had her “Life You Want” multi-city tour, we went to Michigan, San Jose, Houston, Miami, Newark, and D.C. She’s an easy breezy traveler. My favorite part about being on tour with her was the security. They would meet with me about the plan—she’ll go out this way, don’t let her do this. I was like, Gayle King is going to do what Gayle King wants. She’ll go rogue. And she did. She went into the crowd and talked to people. She took selfies with people at the airport. I was like, I told you she’d go rogue.

So what are some of your main responsibilities?
I write and edit a few front of book pages. When Gayle is here, she’s my priority. I do the typical assistant stuff, like turn on her computer, turn on her TV—she lives and breathes the news. In the daytime she has CNN on. If people start going into Gayle’s office, you know something’s going on. Nowadays that happens about once a week. When Hillary lost, everyone was in her office…people were on the floor crying, feeling feelings. I’m also part of the party planning committee and the goodbye party committee.

There’s a party committee?
Yeah, me. I’ve been working on a friend’s goodbye cover. Today it’s mostly edit stuff. When Gayle leaves I try to catch up on all of that.

Did you plan Gayle’s surprise 60th birthday bash?
Yes, I’ll take credit for that. We brought her page “The World According to Gayle” to life. We had a burger, popcorn, sweets, and a grilled cheese station. Everyone wore clogs, because Gayle wears clogs. There was yellow everywhere. Oprah was there. [O creative director] Adam Glassman told Gayle that Jennifer Aniston was shooting a cover next door and wanted to say hi to Oprah. Oprah had just gotten over a flu, and was making such a big deal about it, like she was so sick and didn’t want to see anyone. Adam finally brought them over. She didn’t see it coming at all.

How many pairs of clogs does she own?
A lot. She has a pair here, another that she carries around, but there’s way more at her house.

What’s your system for keeping her on schedule?
Opening my mouth [Laughs]. I send her her schedule the night before, and I’ll ask if she has to do anything, like read a book or watch a movie, for CBS. But I pop into her office to remind her about everything.

Do you go onset with her at CBS?
No, she has another assistant at CBS. We’re constantly texting.

What’s your hidden talent?
I’m really good at Photoshop. When she travels, she gets an itinerary. I can’t do anything the normal way, so I Photoshop little folders for her. They’ve gotten really elaborate. Once she realized I knew how to Photoshop, for anyone’s birthday or Christmas, she doesn’t go to Papyrus, she tells me her “vision.” We go through a few editing rounds before it’s good to go.

OK, so how often do you see Oprah?
She comes into the office about two to three times a year. She calls the office all the time, and usually I pass her on to Gayle, but sometimes she’ll want to talk.

Is Gayle friends with Beyoncé?
She’s friends with her mom. When I was an intern, Arianna went on vacation and I covered for her. I was dying to ask her about Blue Ivy, but I was like, keep it professional! The second day, I was like that’s it, I’m going in! So before I left, I was like,  “Hey, I’m done for the day, do you need anything else? Also, have you met Blue Ivy yet?” She just laughed and said no. Gayle interviewed Jay-Z a couple weeks ago about his show on Spike. I was like, “You know I’m going with you, right?”

Have you interviewed Beyoncé yet?
I wish! I asked her a question 10 years ago, though. I used to live on TRL when I was a teenager. I ended up getting to know the booker, so when Beyoncé went on, I went on. They made me ask if she ever had a tattoo. At the time she had a big rose that she now has removed. She told people not to get tattoos before they’re 30. Professionally, I never interviewed her.

Your moniker is JZ, at least on Instagram: @JZnotthatJayZ.
That’s one of the greatest gifts my parents have ever given me—my initials. Gayle hates my Instagram name. She thinks it’s too long.

Tell us the story about how Tina Knowles made you a cousin?
When Beyoncé announced her twins, I lost it. Gayle wasn’t here. Of course my coworkers recorded everything and sent it to Gayle. So she sent it to Tina. Then Tina posted the video saying that I was a cousin she didn’t know about. So I ran with that.

What’s the best piece of advice Gayle has given you?
I turn to her before Google, and she always knows what’s the right thing to do. Once when we were at a Beyoncé and Jay-Z concert, she took me and a friend to the VIP Lounge. Before we went in, she turned to me and said, Joseph, act like you belong.

What’s your biggest job perk?
My relationship with Gayle. I like the bond we have. And the concerts! I saw Nicki Minaj fifth row. Once Jay-Z did the Global Citizen concert a few years ago, and I went with Gayle. She got us onstage with the crew and the family. That was incredible.

So where do you see yourself next?
A lot of us have writing dreams. But, in order to get that, you really have to nail down this job and be their eyes and ears. Because of that, she’s a champion for me. When people ask if I can do something, she’s my biggest cheerleader. She knows I won’t let anything slip by.

Watch Katy Perry Get Interviewed By a 7-Year-Old Girl

Stella McCartney Resort Rocks Reggae, Perfume, and a Message in a Bottle