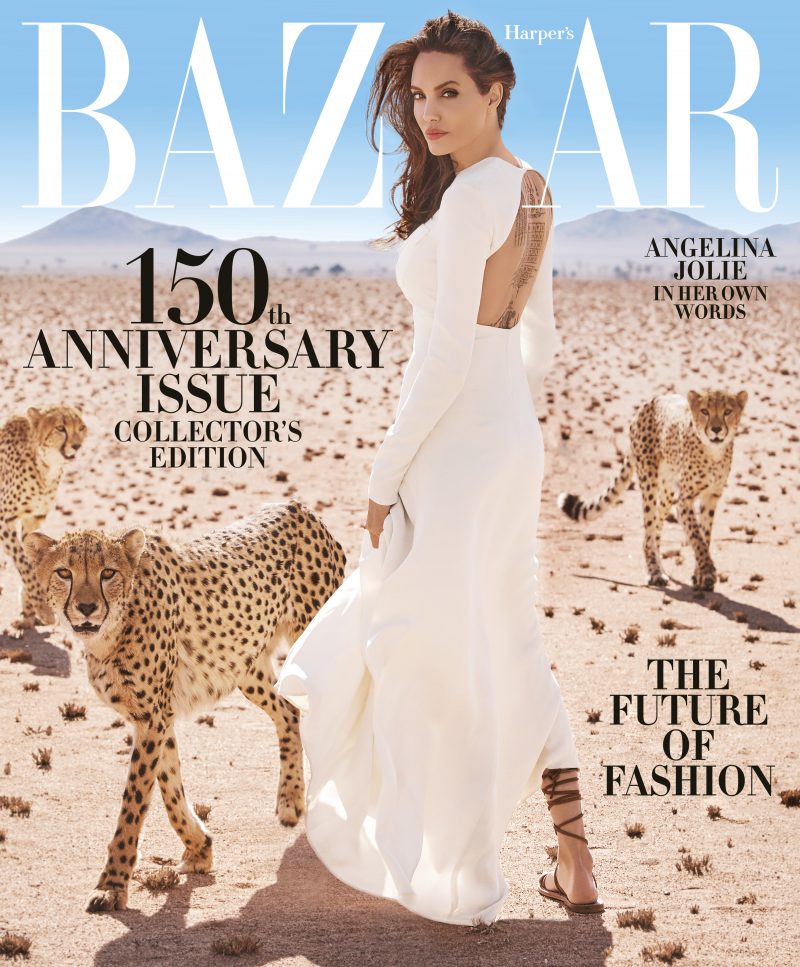 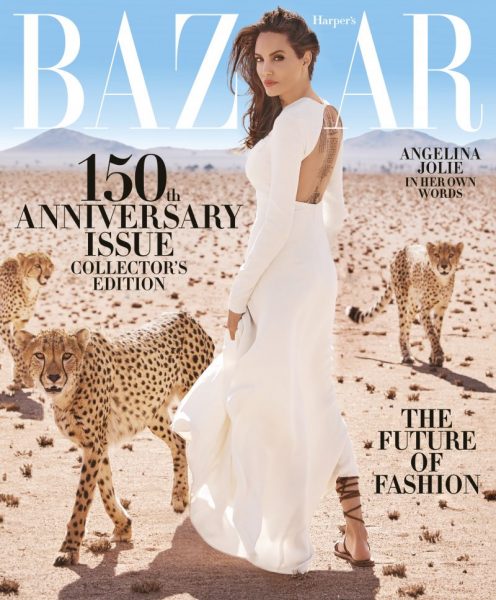 Angelina Jolie headed to Africa to pose with three very photogenic cheetahs for the cover of Harper’s Bazaar‘s 150th anniversary collector’s edition issue. See no fear? Well, she’s no stranger to them! The orphaned, rescued cheetahs were sponsored by Jolie and her family since they were tiny cubs in 2015 and brought them on set to bring attention to the impact of our choices on the environment and wild life, as well as the dangers of the demand for products made from wild animals.

The actress was lensed for the issue by Alexi Lubomirski, wearing Ralph Lauren Collection on the cover and Gabriela Hearst and Dior in the inside photo spread. Jolie penned a letter from Nambia for the collector’s edition—she’s worked there for over a decade with the Jolie-Pitt Foundation—where she shares her thoughts on women’s rights today among other topics. The key message of Jolie’s piece? To keep the wild in the wild. Peruse highlights from the interview below and click here to read the story in-full.

On our individual and collective impact on the environment
“Fashion was once a major factor in encouraging the demands for clothes, jewelry or objects made from wildlife parts. But magazines can now send a different message: that wild animals belong in the wild, and ivory is not beautiful unless on the tusk of a living animal…Each of us has the power to make an impact through our everyday choices. For instance, we can commit to never buying illegal wildlife products such as ivory and rhino horn. We can end the demand for wild animals as pets.”

On the link between the environment and women’s rights
“Women make up most of the world’s poor…when the environment is damaged—for example when fishing stocks are destroyed, wildlife is killed by poachers, or tropical forests are bulldozed—it deepens their poverty. Women’s education and health are the first things to suffer.”

Jolie recently used her voice to stand against fallen Hollywood producer Harvey Weinstein. She told The New York Times, “I had a bad experience with Harvey Weinstein in my youth, and as a result, chose never to work with him again and warn others when they did. This behavior towards women in any field, any country is unacceptable.”