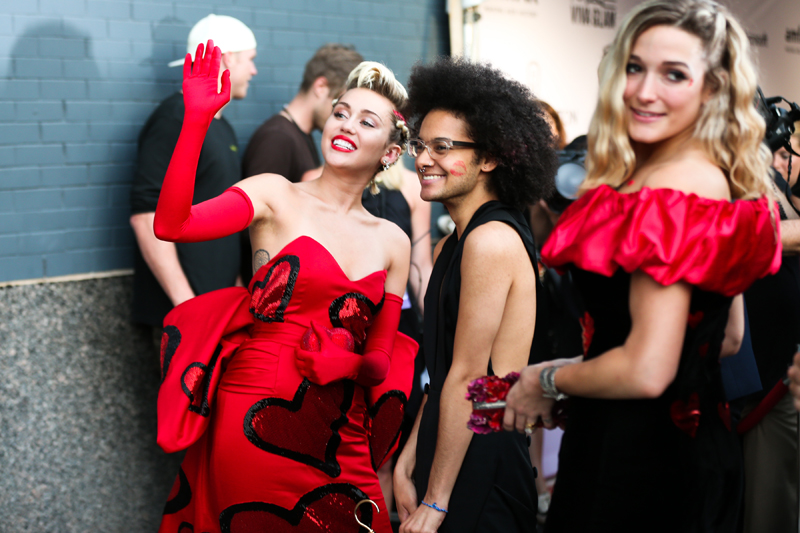 What do Miley Cyrus and Andy Cohen have in common? “Our long tongues! We’re also both passionate and easily excitable!” Andy Cohen told The Daily last night at amfAR’s 6th New York Inspiration Gala at Spring Studios, produced by Josh Wood Productions. Now the the duo have one more thing in common after both being honored by the AIDS organization for their work in helping prevent the spread of HIV and AIDS. The night kicked off with a (blindly bright) cocktail hour before guests such as Laverne Cox, Taylor Hill, Alexander Wang, Adam Selman, Lily Donaldson, Francisco Costa, Billy Eichner, Tyson Beckford, amfAR chairman Kenneth Cole, John Demsey, Andreea Diaconu, Sir Ivan, and Victoria Justice caught an all-male mod fashion show walked by Chad White, Walter Savage, Brian Shimansky, Josh Truesdell, Eian Scully, and Cory Bond, to name a few. (There were over 60 looks on the runway, but the mostly all male crowd didn’t seem to mind a bit.)

After the show, guests moved upstairs for a sit down dinner with host Anderson Cooper taking to the stage to introduce Sandra Bernard. The comedian presented Cohen with his honor saying, “We all know Andy as and welcoming host, drunk when he needs to be, and deeply concerned too. He is fun and charming and a sweetheart. The Saint Louis Cardinals love him and so do I because he’s a good jewish boy. No ones more willing to host, to give, to get in there, and make it happen for a good cause.” Cohen turned it back to Cyrus when he took to the stage. “I moved to New York City in 1990, which to me felt like yesterday until this morning I googled Miley Cyrus just because I was wondering how old she is and I realized I moved here two years before she and ‘Achy Breaky Heart’ were born,” Cohen said. “So, I felt super old. I’m very excited to be on the same bill as Miley.  I love you, Miley, and I’m a fan.”

Cyrus, staying loyal to pal Jeremy Scott’s Moschino in a red number, gave a shout out to amfAR champions Elizabeth Taylor and Sharon Stone and thanked her parents who made a rare public appearance to support their daughter. “My mom and dad, mostly my dad,” Cyrus said. “I think this is the first time we’ve actually hung out outside of the house in maybe 15 years. You look handsome, I’m happy to have you here. I just want to tell you how much I love you—I’m gonna f–king cry like a loser—I just want to tell my parents, I hope that this makes them proud and somehow makes up for all the s–t that I do. You are two of the most selfless people, and you’ve taught me and all my siblings how important it is to be there for those who need us and how important it is to care about other people and their lives, so thank you for making me believe that. People say that you don’t choose your family, but I choose my family every time, and I’d think that even if you weren’t my mom and dad. I hope we’d still be in the room together looking for a cure, so thank you very much. One of my favorite quotes from another heroine of mine, Audrey Hepburn. She said that as you grow older, you realize you have two hands: You’ve got one for helping yourself and one for helping other people. Thank you for instilling that in me and making me really know that that’s true because if I know anything from doing this after how—10 years of doing this, nothing means s–t except f–king helping people. That’s the only thing that makes us feel that we’ve really accomplished anything at all.” Moments later she thanked the organization who put the evening together. “I feel grateful to be in a room with so many people that care because unfortunately that’s rare in the world we live in today,” Cyrus told an enthused crowd. “Maybe that’s why it’s so easy for me to be standing up here receiving this Inspiration award tonight. This privilege is an honor and amfAR, I will not let this, my life, your dedication, your hard work, and all these valuable souls effected by HIV and AIDS go to waste. We will continue to fight against judgment and we will find a cure for HIV/AIDS. Thank you!”

After a performance by Mary J. Blige, most of the guests carried on to The Top Of The Standard for a nightcap. A night to remember.

Major Layoffs At Us Weekly, Rolling Stone, And Men’s Journal