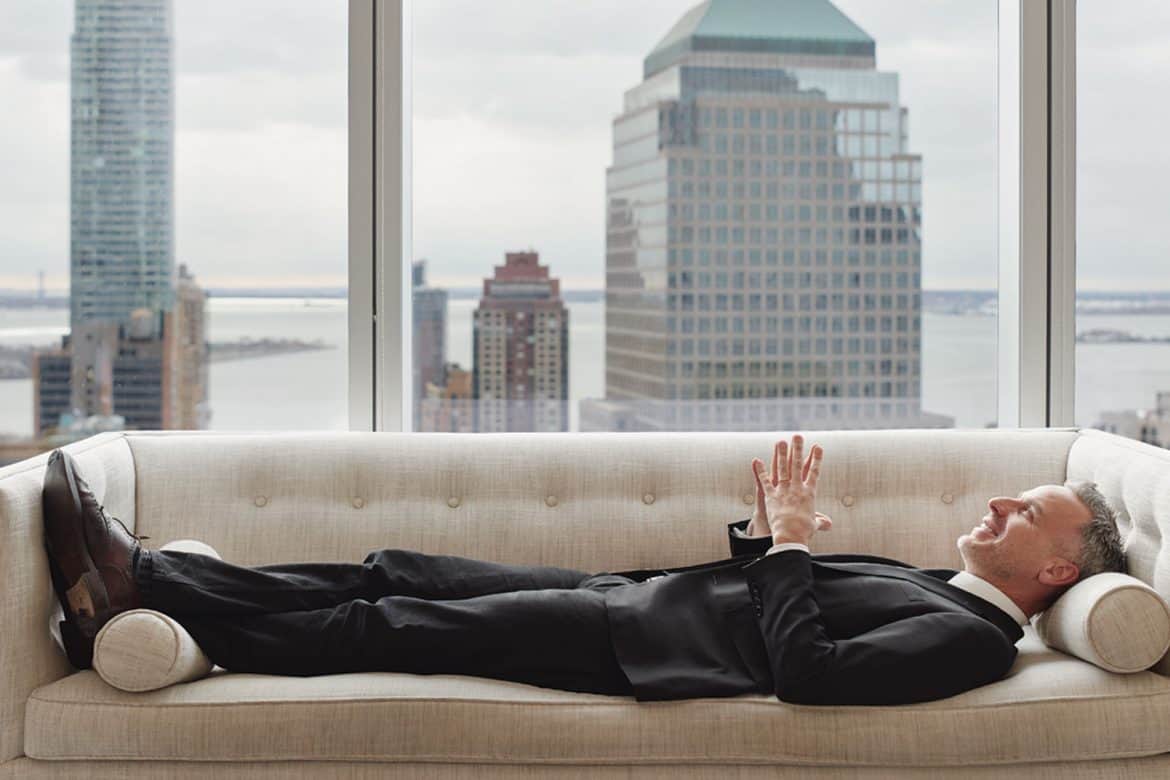 In 2011, Adam Rapoport was named editor of Bon Appétit and became Condé Nast’s shiniest next-gen star. Just a few short years later, during a period of massive change in the publishing world, he’s become one of its most-tenured executives, and is widely credited as the mastermind behind BA’s golden era. Take notes!

Your revamp of Bon Appétit is one of Condé Nast’s biggest success stories in recent years. Why did it work?
One of the reasons is that we are an editor-first brand. Our editors are our stars, and we want to share their passions and interests with our audience. The compliment we get most often is, “I feel like I know you guys,” and that’s very much by design. Your personalities certainly come across on Instagram. We launched our Instagram feed eight years ago or so. My edict, if you will, was that we were not going to post any images from the magazine. We’re only gonna include iPhone shots from us, the collection of editors, about what we’re cooking and where we’re going out to eat. At the time, we started with about five editors who were kind of sanctioned to be the contributors to the Instagram feed, because we wanted to make sure that the look was correct — you know, overhead photos, natural light, good-looking food. We got to a point where we had an entire staff of contributors out there who could capture quality food shots and then write about them in a way that was conversational and Instagrammy. As Instagram has evolved, we have relaxed our notion of “iPhone photos only.” Now, the imagery on our feed might feature something from Healthyish or Basically, and it might feature an image from the magazine pages, or it actually might feature us taking a photo with our cameras of that same dish. The horizons have expanded, certainly.

Are lots of aspiring BA editors sliding into your DMs?
Yeah, but if you are young and want to get started in this business these days, I don’t know if starting at a company like Condé Nast makes a lot of sense. I always feel like Condé Nast is a company that you end up at — if you start at someplace smaller, you get the opportunity to do a lot more stuff. If you have a chance to do something for a few years that’s sort of different or challenging, I always endorse that.

What part of your job do you like the best these days?
Definitely not going to budget meetings. I have always most enjoyed coming to an office with a lot of smart, fun people. As an editor, you’re supposed to be guiding them, but it’s funny how much it works the other way around. I’m probably much better in a smaller environment — a one-on-one, one-on-two environment — coming up with an idea for a story or a video or a podcast. I’m not great in big meetings and, like, a structured environment. For better or worse, I’ve always written about and edited things that I’m personally interested in, from sports to fashion to food. And the same goes for platforms. If I’m subway-ing to or from work, or running to the grocery store, I’m never not listening to a podcast. As any editor who has sat in a meeting with me can attest to, I’m constantly checking Instagram — all day, every day. And ever since I was at GQ, I’ve always done TV and appeared in videos. These are all things that I personally love. So I just try to bring those same interests and passions to Bon App.

What do you make of the rise of the influencer?
For so long, there was this sort of corporate dominance of culture content — if it wasn’t ordained by one of these big fashion magazines, it didn’t count. And then someone like Leandra Medine came along — a smart, funny twentysomething with an opinion on fashion who writes about it in a way that people are going to relate to. You don’t need to be Grace Coddington, as awesome as Coddington is. In between you could say there’s a lot of crap. But there’s a lot of crap in big fashion magazines, also. It’s still up to you, as the consumer, to decide. Generally, quality wins out. At some point, influencers get annoying and ridiculously self-promotional, and that’s when people stop following them. We need to appreciate and understand why those people connect, and a lot of it is because they’re sort of honest and organic and true to themselves. We, as editors, need to practice those same traits as well. That’s why Bon Appétit has a great Instagram feed, that’s why our videos work, that’s why our podcasts connect — it’s just us being us. And that’s been a struggle over the years for big corporate publications, because oftentimes, they don’t feel as personable and honest as they should, and the ones that do often succeed.

Going into 2019, there’s been a lot of unsettling news coming out of Condé Nast. How are you feeling, generally or specifically?
I always feel really bullish and confident within Bon Appétit. With this staff and the opportunity to do what we do, we, in general, do a good job. The challenge is when you realize that you’re part of a much bigger company that is having to face the turbulence that this industry is enduring right now, so that’s when things like budget meetings, reorgs, the weekly executive announcement e-mail come into play. Every big company from Meredith to formerly Time Inc. to Hearst is having to figure it out. These have been two really challenging years for the industry, but we’ve launched Healthyish and Basically, we’ve gotten this YouTube channel to just a point of really killing it, our events have grown exponentially.… I think we’ve accomplished more in these challenging times than we did in the six years prior that I’ve been with this brand. A lot of times, when you’re tasked with a challenge, you succeed the most.

Without looking back on your long and illustrious career at GQ, we do require your thoughts on what Demna Gvasalia is doing at Balenciaga.
Andy Baraghani, our senior food editor, walks around in his very fancy Balenciaga sneakers, making sure to never drip anything on them. I love it, because it gives me something to make fun of him about. There’s no way that [Balenciaga] could’ve known that that was going to be a success. In this day and age, when margins are so tight, you still have to be allowed to fail. If they succeed, they could be your defining moment. If you only do what you already know will succeed, it will just be marginally okay at best. And what’s the point of that?