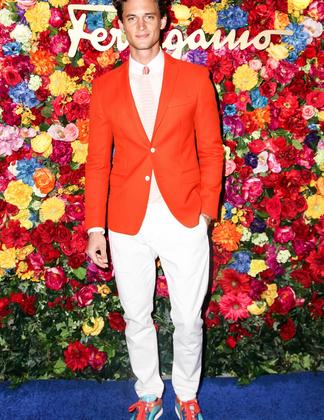 We caught up with hunky male model du jour, Garrett Neff, at Ferragamo’s party at The McKittrick Hotel last night after featuring Neff’s look at the Bergdorf’s Scatter My Ashes premiere for “Look of The Daily” yesterday. And yes, he wore Ferragamo at both events! More titillating stuff ahead…

What were you and your friend filming outside the Ferragamo bash?
You know where the red carpet was? We’re going to do a Vine film and we’re going to pretend I was sleeping and then film me waking up from a dream [on the red carpet]. You can follow me on Vine. It’s just my name, Garrett Neff.

Will do! Where are you guys headed to next?
We’re going to a strip club called Pumps for Steven Klein‘s birthday. The invitation actually said, “Bring lots of ones!”

Ha! Did you see that we wrote about your dapper look yesterday?
Yeah, I did. That was fun!

Did you show it to your mom?
[Laughs] I don’t know. If she’s following me on Instagram, then she saw it.

You’ve worn a lot of Ferragamo: are you working with them, too?
I’ve worked with them before. I was in the show a few times and they just launched a fragrance.

Are you the face of the campaign?
Yes! It’s called Aqua Essenziale.

Lastly, do you read The Daily?
I do now!

Ferragamo Parties In Honor Of Its Iconic Vera Flat

Mixing It Up With Model and Swimwear...