Ferragamo Parties In Honor Of Its Iconic Vera Flat 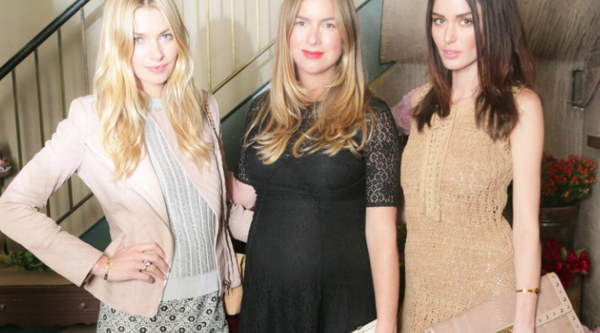 (NEW YORK) Last night, the chic set came out to toast Salvatore Ferragamo and 35 years of their iconic Vara shoes at The McKittrick Hotel. In celebration of the anniversary, the brand is launching an online venture called L’Icona. A quick history lesson: the coveted mid-heel grosgrain bow shoes first launched in 1978; the Varina flat-heeled version followed in 2007. Nowadays, they can be customized to come in various color combinations and an exclusive summery pattern.

Back to the party! On hand to fête the footwear were some of the stars of the campaign, like Jessica Hart, Lauren Remington Platt, Chiara Clemente, Lily Aldridge, Amanda Hearst, and Alexandra Richards. Richards also acted as the resident DJ, playing a mix of reggae, Prince and, yes, even some Rolling Stones. “It’s crazy. I’ve been hearing so much [Rolling] Stones music on my favorite rock channel 104.3 FM recently and I’m like, ‘Wow, Dad’s getting so much love right now!'” said Richards. Also j’adore-worthy: that the band’s still doing their thing after all these years. “I’m really proud that these guys are still doing what they love at their age,” she said. But what music is she loving right now, besides her dad’s? “I really like Lykke Li and I haven’t seen her perform yet. I’m also really into The Black Keys. I’ve seen them play with my dad, but not at their own concert.” If only we had been at that show! Theodora Richards also made an appearance to support her sister and was seen later in the night hamming it up in the Ferragamo photo booth.

Claiborne Swanson Frank, who shot Alexandra Richards and 20 other iconic ladies du moment, was certainly loving her job. “It’s so cool to see this project come to life tonight, with Alexandra DJ-ing and all of the girls here,” said Frank. Creative director Massimiliano Giornetti chose the leading ladies, but says Frank, “Everyone he chose, I loved too, so the list was a real labor of love.” Speaking of labor, Frank’s seven months pregnant now, meaning she shot the campaign for a month straight while she was four or five months along. “I actually think it made me feel more creative,” said Frank. Expectantly inspirational!

Later in the evening musician Sophie Auster gave a stellar performance to the packed house singing her own songs, plus an outstanding cover of Melanie’s “Brand New Key” (famously featured in Boogie Nights). Indeed, the fashion crowd spent the rest of the night boogeying it up on The McKittrick’s rooftop. How about the party favors? Guests were allowed to wrap up the flowers that had adorned the venue as they exited for a touch of home décor. Bellissima!
PAIGE REDDINGER

Livin' On A Prayer