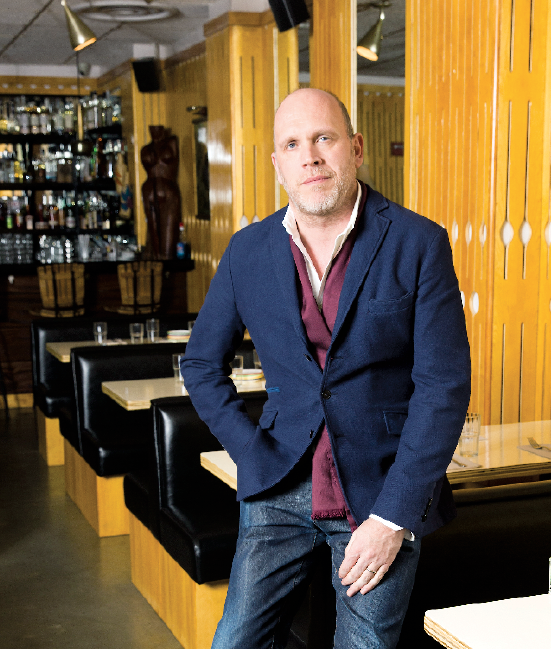 Dirk Standen’s decade-long tenure at style.com happened by accident, but it’s been a lengthy stint that has rarely proven boring. Standen talked us through the site’s defunct seven-issue print mag, being an early arbiter of street style shots, and his new boss lady (hint: her name rhymes with Shmana Lintour).

How did you end up at style.com?
The short answer is serendipity. The long answer? I’m a part of that post-punk generation that read magazines like The Face and i-D in England and Interview when Andy Warhol was there and the original Details in New York. There was an amazing convergence of fashion, art, music, and nightlife that awakened my sense of style. But fashion was never really the plan. I went to film school at Columbia, and when I was there they invented this thing called the Internet. My first job out of college was at Sidewalk.com, which was Microsoft’s city guides site. I worked there and at a couple of Internet startups, and I did freelance writing for The New York Observer, GQ, Details, and Tatler in England.

What was your first Condé Nast accomplishment?
I helped put together men.style.com. I guess I didn’t screw up too badly, because a year after that they made me editor in chief of men.style.com and style.com. That was 10 years ago. Style.com was about four years old at that point.

What were your early days at style.com like?
On a busy day, we’d do eight reviews and they’d go up midday 24 hours after the show, and everyone was like, “Wow, I can’t believe you put them up so quickly!” If that happened today, people would go crazy and be like, “What the hell are you playing at?” Now, on a busy day, we do 30 reviews. We used to do one or two stories a day when I started; now, we do 30 stories a day in addition to the reviews. Originally it was just shows, parties, and some shopping pieces; now there’s street style, fashion news, and in-depth interviews with designers.

What’s stayed consistent?
We’ve always stayed true to fashion as obsession. A lot of our competitors see fashion as a subsection of celebrity, or lifestyle, or women’s interests. For us, it’s the main event.

When did you feel like style.com was a success?
At the beginning, some designers didn’t want to be on our site. They worried their clothes would get copied. There was definitely a shift five or six years ago—we started hearing, “Please, can we have our show on your site?” instead.

You were an early champion of street style photography.
I kept telling my team we needed someone as good as Scott Schuman. Eventually someone said, “Why don’t we ask Scott?” So we did. At the time it was unheard of for a “mainstream” site to work with a blogger. The rest is street style history.

Is the street style moment over?
I keep thinking it’s peaked, and I know there’s a backlash, but the numbers just grow every season. Tommy Ton does most of our street style photography, and he has such a unique eye. We’ve been trying to branch out and look at different scenes, like our successful college campuses series.

Was the seven-issue run of Style.com/Print what you wanted it to be?
The magazine happened when we became part of Fairchild, which has a history and expertise in making magazines. It made a lot of sense to extend the brand into print. The first issue had a lot of energy, but it definitely took until the fourth issue to really hit our stride. I’m pleased with what we did. There are still stories I’m very proud of, I guess.

Like what?
We were one of the first to put Cara [Delevingne] on the cover. We did a 20-page shoot on Hood by Air—I don’t think many other U.S. magazines would do that. We did an amazing shoot with Alasdair McLellan at Christopher Kane’s high school. By the end, I think it was the third-best fashion magazine in the world. But if you’re not gonna be No. 1, then…

Wow, third-best magazine in the world? After which titles?
Well, I have my own list, but I’ll keep that to myself.

How did it do on newsstands?
Our magazine was a European, indie, niche model. It was less about the newsstand and more about an obsessive group of subscribers. It went out to about 100,000 people; there were only 25,000 copies on newsstands. It was definitely a different model from most Condé Nast magazines—it made more sense within the Fairchild framework.

Were you disappointed when it got axed in December?
It was a lot of fun, but a huge amount of work, with basically the same team that does the website. We wondered if it was better to put energy into the digital part of style.com, and so far, that’s really been paying off.

There have been management shifts since you left the Fairchild umbrella.
Yeah, look, Anna Wintour is now my boss, and she’s been incredibly supportive and really interested in helping style.com grow. I think it’s good to have Anna in your corner.

What was your relationship like with Anna before she became your boss?
We’ve always gotten on very well. Style.com was Vogue’s online hub several years ago, so obviously I knew Anna professionally from then.

Let’s discuss last year’s digital redesign.
It had been five or six years since the previous redesign, which is forever on the Internet. It was overdue. The way information was presented to users was very static, and these days people view online as an endless, seamless scroll of content. Our team’s dedication is incredible, and “fashion first” has always been a style.com mantra. So we try to get shows online as soon as possible—it’s a lot of tech work and human perspiration.

Thoughts on the fashion reviewing landscape these days?
Reviews are not as important as they used to be, but more people are probably reading them now than ever before. Digital media makes it more accessible, and there’s a generation that’s grown up viewing fashion as entertainment.

Do you read all the critics?
I read a few critics nowadays; a few years ago I used to read everyone. But there are obviously people I pay attention to, like Cathy Horyn. Her voice was very missed last season, and she keeps us on our toes.

What’s it like being a guy in fashion…who doesn’t work for a men’s book?
I’m not as alone as you might think! There’s Fabien [Baron] at Interview, Olivier [Zahm] at Purple, Jefferson [Hack] at Dazed & Confused, Joerg [Koch] at O32C… I have a different perspective. It’s less, “Oh, I love look 19 from this particular show.” As a man, I can see the overall mood of a collection, and the way that fashion is moving.

Do you get jazzed at all about men’s fashion?
I’ll probably get in trouble for saying this, because I loved going to men’s shows when I was at men.style.com, but there isn’t the same energy on the men’s side. Everybody says it’s so collegial, pleasant, and not as high-stakes compared to the women’s shows and that there isn’t as much pressure. But that’s what I don’t like about the men’s shows; they don’t feel as exciting. Interesting things in men’s fashion tend to come from streetwear, not the runways.

Could you ever see yourself editing a men’s publication again?
After what I just said, I’ve probably cut myself out of the running. [Laughs] Absolutely.

Who are your fashion buddies?
In fashion, some people belong to the day and others belong to the night—I guess I dip into both worlds. At parties, I’ll see buddies like Paul Sevigny and Olivier Zahm. I adore Carla Sozzani, and I love Carlyne Cerf de Dudzeele.

How numbers obsessed are you?
Obviously, I check the numbers every day. Now you can track how stories are doing on a minute-by-minute basis. I try not to get too obsessed, but I’m always looking at the numbers. Style.com has an incredible level of engagement—people spend an average of 13 minutes on the site. But if the numbers go down one day, it puts me in a bad mood.

Do you ever fully unplug?
Let’s just say my wife hasn’t destroyed my devices on vacation yet, but she’s come close a few times! I need to get better at switching it off, like everyone. You can guarantee the moment you go on vacation, something will blow up.

What do you think about the future of print?
That’s a loaded question for someone who works for a company with such an illustrious history in print! The future is digital, so any media publishing company’s main offerings will eventually have to be digital.

What does your closet look like?
It’s fairly minimal: a lot of navy jackets and dark denim jeans. It’s like how architects who build supermodern buildings all seem to live in prewar buildings themselves.

You’ve spent 10 years in this role. That’s awhile!
Fashion is dynamic and the Internet is dynamic, which is a very seductive combination. If I were just doing fashion at a magazine I might be bored. If I worked on boring subject matter at an Internet startup, even if it was insanely popular, I’d kind of be bored there, too.

PLUS! A few of Dirk’s fans weigh in…
“People used to wake up and read the Bible. Now they wake up and go to style.com. I’m not a computer guy, I don’t have an e-mail address, but style.com is one of the reasons I felt I had to learn to use the iPad. Dirk is a really special, different man. He’s down-to-earth. And he’s very loyal—if you called him, he’d call you back. Sometimes I think he is such an outsider, but that gives him a better perspective; it’s such a huge advantage. The interviews he’s done with me have been so profound, deep, and intelligent.” —Alber Elbaz

“Dirk is a trailblazer. He has a great eye for new trends and emerging talent, and he has created the gold-standard for fashion journalism in the digital age with his work on style.com.”—Riccardo Tisci

“Dirk has always been innovative in his approach and technical skill, and the content on style.com is forever changing and inspiring. His approach has inspired so many other websites around the world.”—Christopher Kane